The 300-inch curse has plagued piles of public-land hunters chasing elk in the West. Here's how to set realistic expectations, get it done, and have a blast 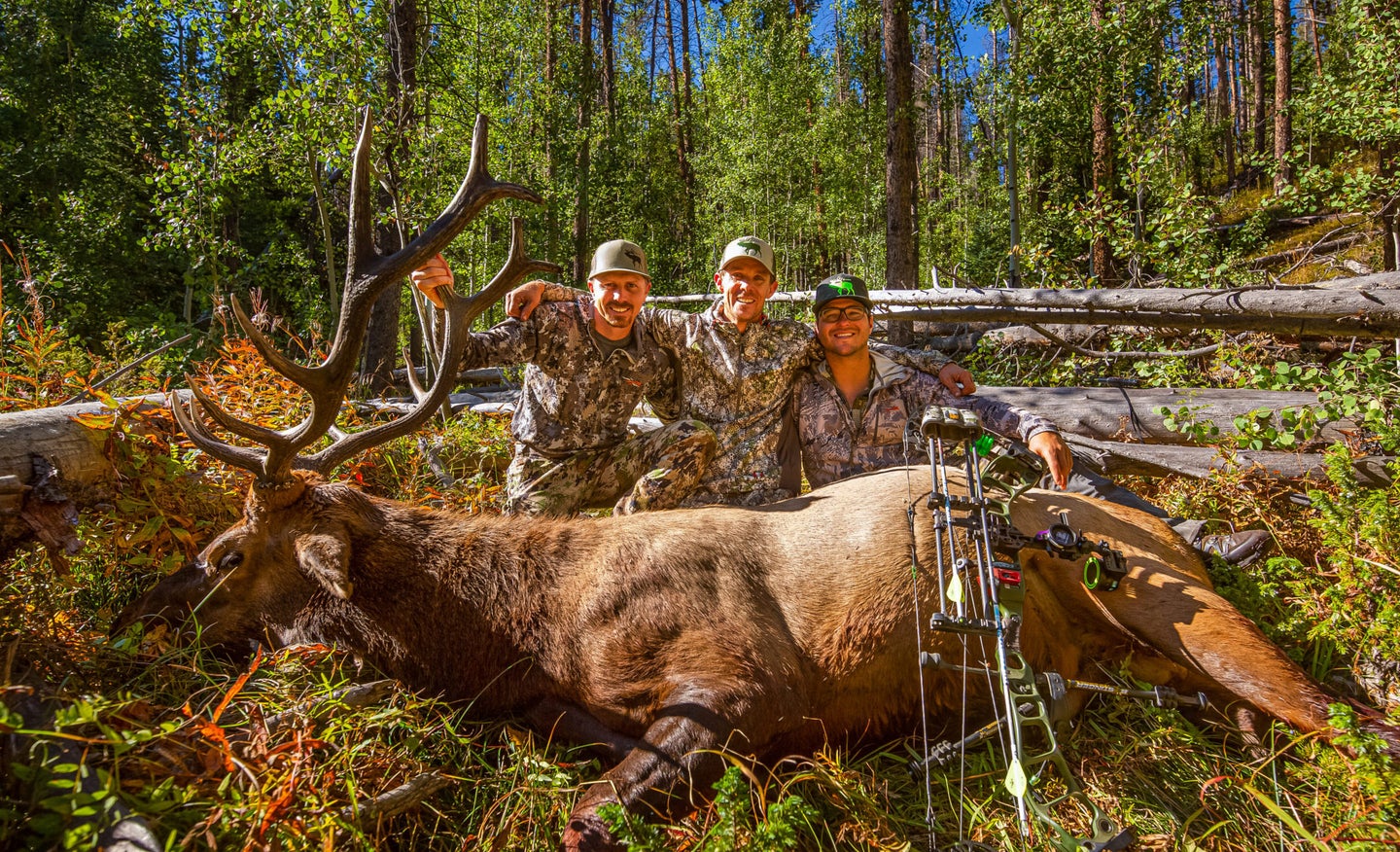 The author, center, with a 6x6 248-inch bull he arrowed with buddies in Colorado OTC unit. Jace Bauserman
SHARE

“I’m not looking for anything big,“ said the first-time archery elk hunter from Missouri. “I’d be happy with just a 300-inch 6×6.”

I must have had a flabbergasted look on my face, because he looked me over from top to bottom and asked me what was wrong. Not wanting to dampen his spirits and not one to tell a man his business, I wished him luck and moved on down the mountain.

If you have a goal of killing a 300-inch bull out West on public dirt, especially if you’re hunting a pressured over-the-counter unit, I hope you find what you’re looking for. On the other hand, I do feel compelled to offer this small bit of advice: 300-inch bulls aren’t exactly common. Taking one is akin to killing a 150-inch whitetail on public ground. I’ve hunted many open-to-all tracts in the Midwest and East, and not once have I arrowed a 150-inch whitetail on public ground.

Way too many new elk hunters sabotage their hunt before it begins by setting unrealistic expectations. Like you, I want to kill a giant bull, but when hunting public land in an over-the-counter area, my arrow gets loosed at the first legal bull I see. In 20-plus years of hunting the West, I can count the number of 300-inch bulls I’ve seen while hunting OTC units on both hands. I’ve killed zero. Take that for what it’s worth. There’s nothing wrong with having a lofty goal, but in truth, your first elk hunt should be all about finding elk, learning about elk behavior, and trying to put any legal bull on the ground. This is especially true for bowhutners, but it holds for all other hunters, too. Whether you tote a bow, muzzleloader, or rifle, you’ll have a lot more fun this way.

Do the Research and Learn As You Go

You already know about e-scouting for good areas, but once you decided where to go, you should spend some time finding out what types of bulls are most common in your chosen area. The Pope & Young record books are a great place to start. Take a peek and see how many P&Y bulls have come from the country you’re hunting. (Just keep in mind if that county has both an OTC unit and a draw unit within its borders, that data may be a bit skewed.) Next, contact the area game warden. You can bet that he or she checks and talks to lots of hunters, and wardens in pressured OTC units are always on the prowl. Many hunt these units, too, and will provide sound wisdom about the type of bulls you may encounter. Another great move is to call any local archery shops and sporting goods stores. They’re not going to draw you an X on a map, and I’ve found employees to be very forthcoming about the size of local bulls.

You’ll quickly discover that any public land OTC bull is a trophy. Lots of hunters head West each year and never see or hear bull. I don’t say this to discourage you, but to prepare you. These bulls are tough customers. They encounter lots of hunters and hear good, bad, and horrendous calling from opening day through season’s end. The upside is that chasing pressured bulls makes you a better elk hunter, which should be the goal. If you consider the ultimate bowhunting prize a bull that scores 300 or better, great. Start applying for limited-draw units where hunt pressure will be less and bulls of this caliber are more common. In the meantime, perfect your calling, stalking, glassing, and basic elk hunting knowledge by getting in the woods and putting a few raghorn 5×5 bulls on the ground.

I have a buddy who is an elk ninja. He’s one of the best bowhunters I know, but when he first started hunting elk, it was 300 or bust. Guess what? He busted. For several years, even after hunting a few draw units, he’d yet to put an arrow through a 300-inch bull. So he pushed harder and went longer, and, all the while, the joy that comes from just being in elk country was becoming increasingly lost.

After putting down a few smaller bulls and finally killing a 370-inch monster in a draw unit, my buddy, J.C. Navarro had this advice for first-time elk hunters: “Go do you, but be sure you’re doing it for the right reasons. Any public land bull is a good bull. I don’t have the numbers, but I can promise you that less than 10 percent of all first-time elk hunters, especially those from other places in the country who don’t have the time to scout, come home with anything close to 300-inch bull. Just go to have fun—to see a bull and hear a bull respond to your calling. Be real about the types of bulls in your unit, and know that you won’t be the only hunter chasing these elk. Go put a bull on the ground, and then you can start the upgrade process.”

Once you do put a few bulls on the ground and start to upgrade your expectations, take the time to learn what a 300-inch bull looks like. Let me help you: It’s a lot of horn. Most bowhunters see a 6×6 bull and instantly assume it’s a 300. Most aren’t. Learn how to evaluate elk from afar. Learn what mass on a bull looks like. Pay attention to details like long thirds, which a lot of bulls lack. Understand the difference between a true whale tale and a short fifth and sixth split. Know the distance between a bull’s ears (21 to 22 inches ), which will help you figure width. Like anything else, scoring elk on the hoof isn’t easy, but the more you practice, the better you get. And, of course, if you put a few elk on the ground, you can measure those bulls. This will give you an idea how much more horn it takes to make 300 inches.

I’ve been hunting elk in Colorado for over 20 years. I’ve drawn one premium tag unit—I shot a cow on day five—and have hunted public land OTC units every year other than that one. I have killed bulls and even one excellent 6×6 in a pressured area in northern Colorado. And yet I still haven’t broken the 300-inch mark with my bow. I hope to finally get mine next year when I expect to finally pull a premium limited-draw unit in a place where the average archery bull is 280 inches. In the meantime, and afterward, I’ll hunt high-pressure OTC units just looking for a decent bull—and having a blast in the process.