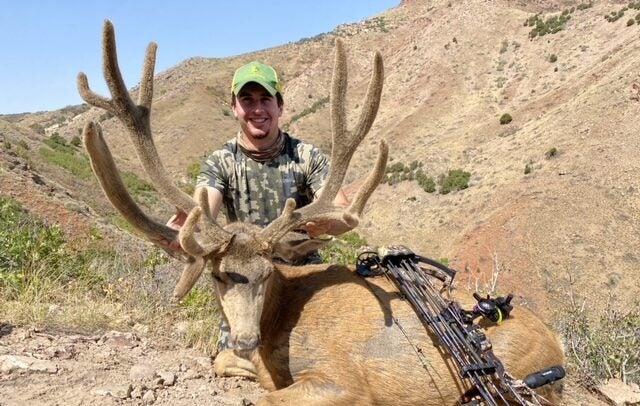 Matt Balise got his high-school graduation present early. He went on a guided mule deer hunting trip to Utah with his father just days before starting his final year at Connecticut’s Suffield Academy. That’s a pretty amazing gift for any kid obsessed with hunting, and Balise made the most of it when he arrowed a world-class buck.

“We were hunting with Alpha Outfitters, and my guide Russ Nielson had been watching this buck he called ‘Dooby’ all summer,” Balise told F&S. “He came up with the nickname because the buck had a double main beam on his right side. Russ had been keeping track of this deer for the last few years, but this summer he’d just gotten huge.”

Nielson felt confident because the buck had been eerily predictable. “The area is pretty arid, and the deer was using a water trough almost every night, then moving up the mountain to bed in the morning,” Balise said. “Russ thought ‘this is a done deal.’ Then the rain came. Just before the season opened, they had 7.5 inches of rain in 36 hours. Suddenly the water trough wasn’t so important. We were going to have to find the buck again.”

“We were hunting the Oak Creek Unit, which many hunters avoid because the terrain is so rugged and the oak brush so thick,” said Balise. “It’s just really hard to kill deer there. And there are not that many of them. Most people want to see deer, and you’re just not going to get that experience here. There aren’t many bucks, but the ones you see are going to be big.”

Nielson, who Balise said “practically lives with these deer all year,” was undaunted. After a fruitless first day, they were able to find the buck on the second morning. “Russ spotted him on the mountainside feeding in the oak brush. We made a move to get above him, and when we were at the top, Russ spotted him about 150 yards below us. Then we found what Russ was sure was his new bed. The bucks in that area are really faithful to a bedding spot. They’ll literally dig out a flat spot on the side of the hill with their hooves and just keep returning to it. So we left our packs and started slowly slipping down the hillside toward him.”

The stalk was painstakingly slow: “We were whispering to each other and pointing out different obstacles we had to avoid stepping on or brushing against so we didn’t blow the buck out of there. We were literally creeping along, moving almost too slow. Finally, Russ stopped to look and spotted the buck. He whispered for me to stand and look, and I finally got to see that massive rack in the oak brush. I can’t even describe how huge he looked.”

Nielson had positioned a spotter on an opposite hill to help them keep track of the buck. “Suddenly he signaled to Russ that the buck had moved about 20 yards and was coming toward us,” Balise said. “So Russ starts looking for a place for me to stand and an opening to shoot through. I got into position, and I saw his rack again. He’s heading for us and Russ tells me he’s going to be at 25 yards. Oak brush was covering the front part of his body, and I had about a one-foot gap to shoot through. For some reason, I am calm when I shoot a bow, so I wasn’t even nervous as I got ready for the shot. If I’d been looking at him through a rifle scope, I’d have been shaking from head to toe!”

Balise made good on the shot, drivinbg the arrow up through the buck’s vitals. “The buck trotted a few steps and stood there,” he said. “I was reaching for a second arrow when his back legs started to buckle, then he went down. We started celebrating immediately, and then we walked to the buck. Russ had told me before that this is one of the only units I guide in where the bucks you walk to are almost always bigger than you think they are. He was right. Russ had estimated the buck was about 215 inches, but he was actually 230 inches B&C. Thanks to a double main beam that grew out of the base on the right, his circumference on that side was 12 and 4/8 inches. But even on the left side, he was 10 and 4/8 inches at the base. The G2 on the right was 24 inches. Russ felt the buck was at least 9 years old.”

While a passionate whitetail hunter at home, Balise jokingly admitted that he “might be wrecked for life” when it comes to killing mature deer. Balise’s dad also bagged a big deer with another guide on the trip, and the two celebrated together. “Sharing that hunt with my dad, seeing that amazing country, and learning from Russ—who did an unbelievable job of putting that buck right in my lap—was one incredible graduation gift,” he said. “I honestly don’t care what the score is. Watching that buck walk up the hill toward us, that rack weaving through the oak brush, was a sight I will never forget.”