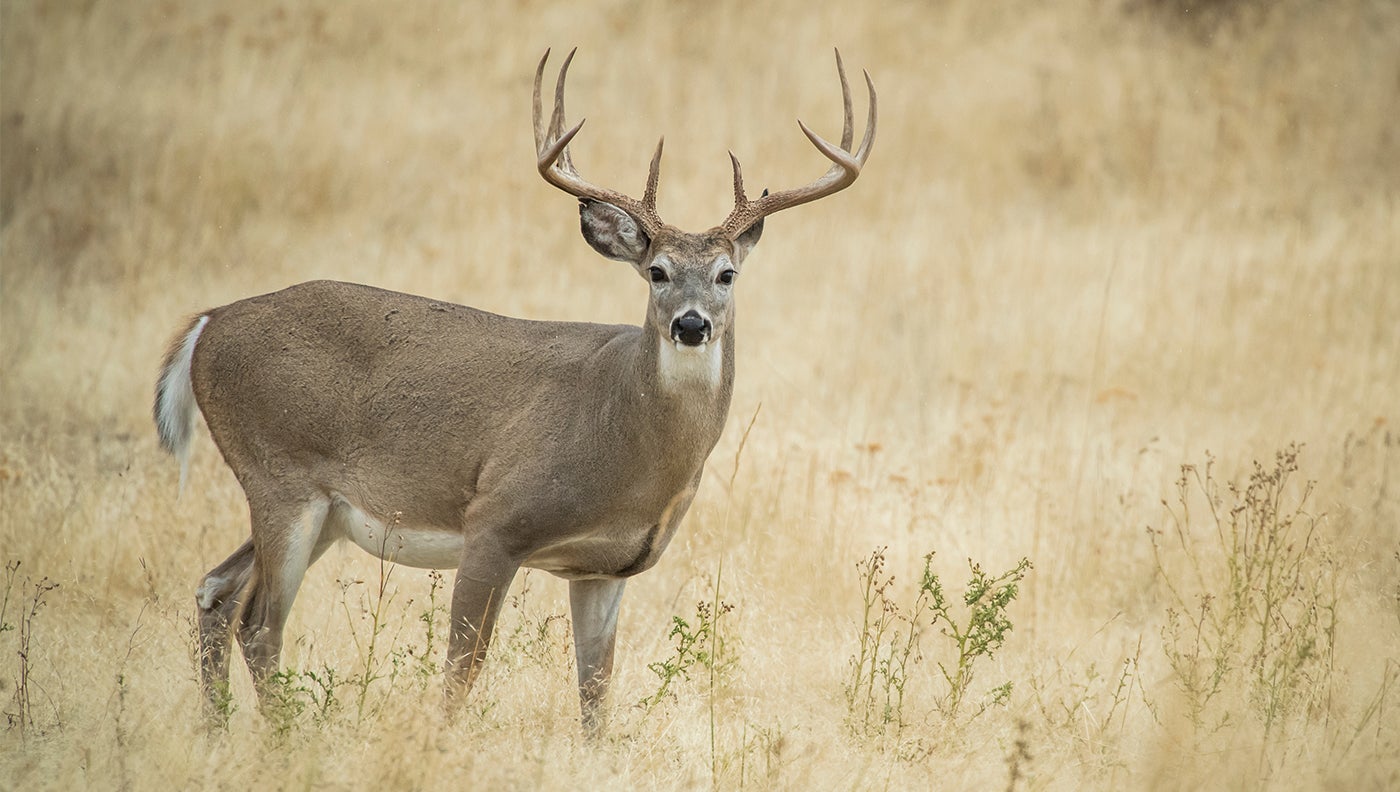 When I was a budding deer nut, most hunters I knew didn’t know how to age a deer. I remember my uncle Lawrence walking up to pretty 6-point he’d shot, ticking off the points on the rack, grinning at me, and announcing, “Six-year-old!” He was joking, but I’d bet that a good portion of our hunting crew would have believed him.

Nowadays, most hunters are pretty are good at aging deer on the hoof, but it’s an imperfect art, and most of us can get better. With that in mind, I chatted with Kip Adams, deer biologist and Chief Conservation Officer with the National Deer Association who offered plenty of nuanced advice for sharpening your buck-aging chops. He also directed me to a video with a 20-buck challenge that truly tested my skills and that you can try before and after you look over the year-by-year breakdown and key guidelines on how to age a deer below.

Related: How to Score a Buck the Right Way

How to Age a Deer: A Year-by-Year Guide

Adams says yearlings are the easiest bucks to age because they basically look like does with antlers. Their skinny necks, long legs, and slim bodies make them look lanky. “There’s a definite line of separation between the neck and shoulders and very little muscle definition,” he says. “There will be little to no staining on the tarsal glands from rub-urinating. While some yearling bucks can have as many as 10 or 12 points, the spread is almost always within the width of their ears.”

“Two-year-olds have legs that still appear too long for their bodies, and they still have an overall sleek appearance,” Adams says. “They’ve developed some muscling in their shoulders and slight swelling in their neck during the rut, but their waist is still thin. Tarsal glands can also help you figure out how to age a deer at this stage. During the rut, there may be some staining on the tarsal glands of a 2-year-old buck, but it will not be as dark and pronounced as it would be on an older deer. In areas with good nutrition, the antler spread may be as wide, or slightly wider, than the ears.”

Adams likens 3-year-old bucks to football linebackers. “They’re strong and muscled but still lean,” he says. He also likes to compare them to thoroughbred racehorses. He says that their shoulders are well muscled and there’s tremendous swelling of the neck. But the sure way to differentiate them from older deer is to look at the waist. “A 3-year-old will still have a lean waist. There will be heavy tarsal staining in the rut and a noted jump in antler growth. Some bucks will exhibit 50 to 75 percent of their antler growth potential as a 3-year-old.” But this isn’t the best clue on how to age a deer; pay closer attention to the body.

Two- and 3-year-old bucks can be compared to men in their late teens and early 20s, but 4-year-olds are approaching full maturity. “Because their stomachs, chests, and necks are now fully developed, most 4-year-olds have legs that appear too short for their body,” Adams says. “They have fully-muscled shoulders, heavy swelling in their neck during the rut, and their waist has dropped down to become even with their chest. In areas with good nutrition, they’ll reach 75 to 90 percent of their antler growth potential. Lots of tarsal staining is a good clue on how to age a deer in this bracket, and during the rut, the staining may extend below the tarsal gland.”

We’re getting into some rarefied air here. While mature buck harvest has been increasing across whitetail ranges of late (meaning more people are holding out for older deer), bucks that grow more than four sets of antlers are rare critters indeed. And once again, Adams says body type–not antler size–is the best indicator. “To me one of the biggest tip-offs are legs that look too short for their body, a pot belly, and a sagging back,” he says. “And of course, they’ll have a massive, swollen neck and heavily muscled shoulders as well as heavy tarsal staining below the glands. I’ve seen bucks in this age class that remind me of a small cow.”

Read Next: The Best Cellular Trail Cams for Deer Hunting

Now we’re talking the stuff of jackalopes and chupacabras. Even on private Texas ranches or sprawling farms in the Midwest, seeing an 8-plus-year-old buck survive winters, predators, vehicles, and hunters (yeah, we’re at least 4th on the mortality list when bucks are this old) is almost miraculous. How do you recognize such an ancient warrior?  “These bucks have passed their prime and regress in both body and antler size,” says Adams. “They generally have loose skin on their face, neck, and shoulders—usually visible as a ‘chin flap’—and they may have pointed shoulder and hip bones. Their antlers can show age-related abnormalities such as abnormal points or wavy or curvy tines, and they have an overall weathered appearance. “

Okay, now that you have those year-by-year guidelines above to follow, here are three rules you should also keep in mind to further sharpen your buck-aging skills.

Ok, we’re deer hunters, so this is not going to happen and Adams admits it. “I’m no different than anyone,” he says. “The first thing I look at when I see a buck are the antlers. But when it comes to determining age, they can really fool you, especially when you’re away from country you’re used to hunting and the deer that live there. I primarily hunt Pennsylvania. If you took the antlers from a 2-½-year-old buck there and put them on a smaller-bodied deer, that deer is going to look huge. Conversely, put that rack on a big-bodied Canadian buck, and it’ll look tiny.

Adams says that while there’s a big variation in antler sizes, the general body characteristics of bucks as they age are pretty consistent regardless of region. “That’s why managers focus on body traits when determining age,” he says. “I only factor in antlers as a tie-breaker, when I’m on the fence about a buck’s age. A beefy 3-½-year-old might have similar body characteristics to a buck a year older, but a slimmer rack might give him away.”

2) How to Age a Deer Through the Year: The Rut is Best

Unless you know a particular deer, Adams says that both the summer and the post-rut are poor times for estimating age. “In the summer bucks are skinny, with small necks,” he says. “And in the post-rut, they’ve lost a bunch of weight from the rigors of breeding season. But during the late pre-rut and for several weeks after, bucks are at their physical peak and the body characteristics of different age classes are most visible and apparent.”

3) Get Multiple Views for Aging Deer on the Hoof

The more looks you can get an individual buck, the better, Adams says. “In some hunting situations, particularly in the timber, we might get only a few seconds with a buck to note body characteristics and estimate age,” he says. “It’s far better to see him in a field or food plot and spend some time with him. Some physical features aren’t apparent if, for example, the buck’s body position won’t let us see the neck, shoulders, or hindquarters, which are all critical when estimating age. Obviously, the more time you have to observe the buck the better. Trail cam pics can help, too.”

How to Age a Deer By Teeth, After the Shot

If you guessed your buck’s age before the shot, there’s an easy and pretty affordable way to find out if you were right. Send a jawbone to Carolyn Nistler at Matson’s Lab in Manhattan, Montana, which specializes in cementum age analysis of wildlife teeth.

Cementum is a hard, calcified layer of tissue that covers the root of a tooth. Because it forms slowly over the years—and because it grows differently in different seasons—it leaves microscopic traces of its yearly development, known as annuli. A careful analysis of the annuli, which are like the rings of a tree trunk, can determine a deer’s age with up to 90 percent accuracy, according to the lab’s website.

“We’re hunters, we believe in hunting as a conservation tool,” Nistler told the Independent Record. “Hunters are definitely wanting to become more informed of the role they play, and age is part of that.” For $75, Nistler and her team will analyze five teeth and send you the results, so you know for sure, and so you can check your on-the-hoof buck-aging skills.