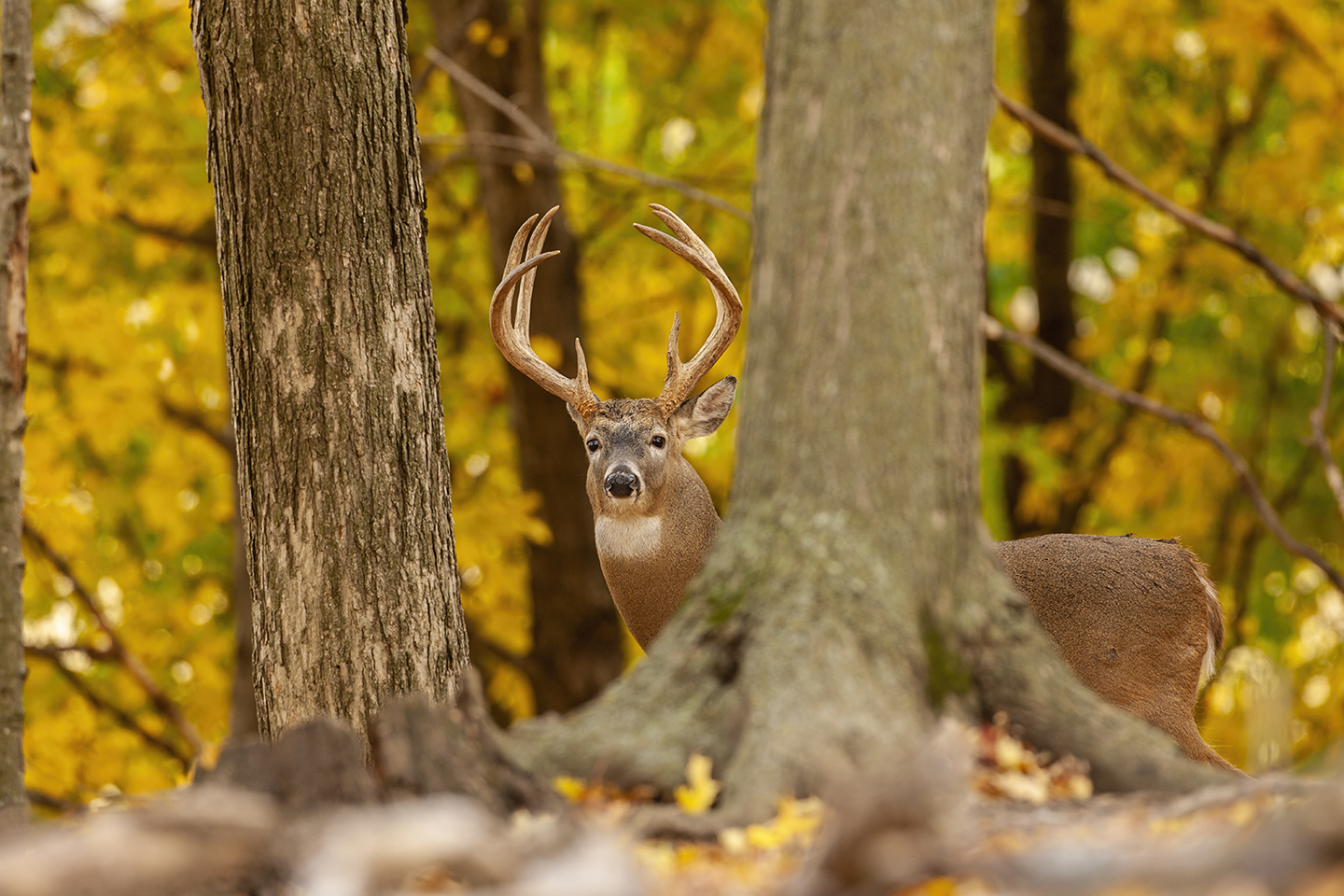 Why I’d Rather Take a Buck in the Timber

Food plots are wildly effective, but for the author, taking a deer in the timber is still the pinnacle of deer hunting

IT WAS LIKE the buck fell from the sky. I’d glassed the wooded creekbottom to my left only minutes before. Then I scanned the opposite timber, stared at my boots for a few seconds, and heard the slightest scuff in the leaves. Or I thought I did. This was my third straight morning in the stand, the point at which I can begin to hear phantom, wishful-thinking noises. But when I turned to look in the direction of the sound, there stood the buck, just 25 yards off, his hooves planted in a scrape.

I wasn’t nervous at first. In profile, his tines looked OK but not towering, and his ears were hiding whatever mass was there. But then he arched his neck to reach for the licking branch, and I caught my breath. Suddenly I could see his jumble of stickers and wrist-thick bases. I reached for my bow while he worked the scrape. Then, backing off the sign, he stood at the junction of two trails, where I could see the full depth of his chest and size of his flank. Either trail would bring him to a shooting lane 20 yards off my setup. He chose the one on the right, and when I touched off the shot, he made a 30-yard sprint, stopped, and tipped over dead.

The buck’s rack was in my top five at the time, and his body still ranks as my biggest. But what sticks with me most about that Kansas buck is how the hunt went down. I’d walked into an unknown piece of timber, walked it for 30 minutes, analyzing rubs, scrapes, trails, and topography, and then finally picked a stand tree, thinking, This is the spot where I can kill a nice buck. That doesn’t always work, of course, but when it does, it’s about as close to the perfect deer-hunting experience as I can imagine.

That may seem a little strange in today’s food-plot era—a time when more and more hunters hope to ambush deer out in the open and when we pore over which seeds to sow and even over the “architecture” and “design” of our elaborate ambushes. Don’t get me wrong. I’m a dedicated food-plotter. In 2009, I arrowed the biggest buck of my life, a heavy-beamed giant that grossed more than 180 inches, in a plot I’d helped plant just a month prior. Every year, I put in plots to hold deer through the season, to keep them fed in winter, for better shed hunting in spring, and for trail-cam monitoring in summer. But when it comes to actually tagging a buck, I would much rather do it in the timber.

I think the reason is simple but often overlooked these days. A buck feeding in a food plot is plain to see and a sight to behold—but still just a buck in a food plot. There’s not much to figure out there. But a buck bedded in the timber or side-hilling along a faint trail on the far side of a wooded ridge is a mystery. If you want to see this buck, you have to solve a puzzle, and to me, at least, that’s the real fun of deer hunting.

It’s also the challenge. Anyone can plant turnips in the hope of luring deer to a chosen spot. The best hunters I know can walk the deer’s turf—the places where they hide and feel safe and call home—and, after a little snooping around, tell you exactly where you can kill a monster. Years back, I was scouting with my buddy Bob, who has a wall full of whopper bucks that speak to his deep understanding of mature deer. I was covering ground as quickly and thoroughly as my legs would allow. But nearly every time I looked at Bob, he was just standing there, scanning the terrain. Finally Bob gestured to a slight crease on an otherwise steep hillside. “What’s up there?” he asked.

“Well, it’s like a mini-bench, but I’ve walked it a bunch and never found a scrape or rub,” I told him.

“Doesn’t matter,” Bob said. “When I scout a place like this, the first thing I do is just stop and look. Then I imagine I’m pouring a big bucket of water on a hillside like that. And whatever contours the water would follow, that’s where the bucks will walk. If the sign is there, fine. But you don’t need it to know. You can kill a buck on that little bench, guaranteed.”

That day completely changed how I scout for deer. I’m excited to find a thigh-thick rub or a scrape that looks like an elk wallow, but mostly I study terrain. It’s a skill that I think can never be completely mastered, but occasionally I am able to decipher why a buck will move through this funnel and not that one, or how three ravines separated by hundreds of yards will work together to make one fence crossing the most incredible stand site ever.

Which brings me to the other simple reason to love hunting the timber. When a buck shows up at your food plot, it’s usually somewhat expected. After all, you’ve set the whole thing up for that purpose and probably have trail-cam pics or have glassed him there before. But when a buck shows up under your stand in the timber, it’s almost always a surprise.

A few Novembers back, while F&S executive editor Dave Hurteau and I readied for a morning hunt here in Minnesota, I told him I was going to try a hang-and-hunt in a new spot. “I’ve just got this place in my head,” I said. “I scouted it last spring, and there was almost zero buck sign. But it felt right.”

I’d picked the tree during my spring scouting mission, and I somehow found it in the dark that morning. Three climbing sticks and a tree step had me at stand height, and I hung the set and settled in. The first 90 minutes after a November sunrise are typically magic, but I wasn’t surprised when I saw exactly zero deer. The reason the small oak hollow had stuck with me was that it funneled toward bedding cover immediately behind me. But the deer heading there were starting from corn and soybean and alfalfa fields on farms over a half mile away. It was going to take some time for them to reach me.

Still, when I looked at my watch at 10:25, I was starting to doubt my hunch. Four deerless hours at the peak of the rut typically add up to Sorry bud, you guessed wrong today. But then I looked up and saw this perfect 10-point rack weaving through the timber. He stopped at just 10 yards before my arrow slipped through him. He wasn’t one of my biggest or heaviest, but I’d never seen the buck before, on camera or otherwise, which made him a perfect surprise and a puzzle solved, as unexpectedly as a Kansas deer falling from the sky.