As gun seasons open in a number of states this Saturday, bucks will be fleeing to escape cover. Here's where you need to be to cut them off 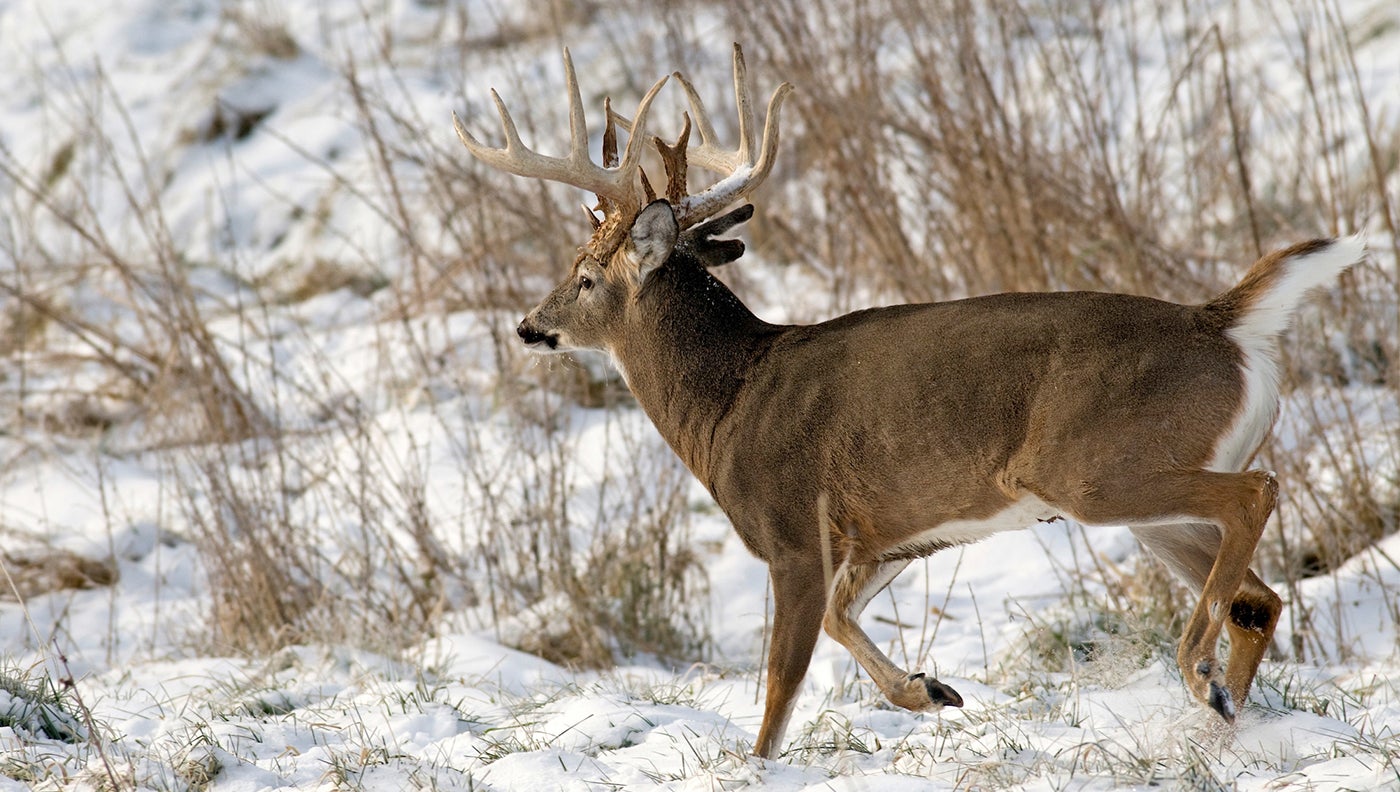 November 19th is the third Saturday of the month, and in a lot of states that means the firearms deer season opener is just around the corner. It also means that a whole lot of whitetail hunters are, right at this moment, counting the hours until Saturday morning. The gun opener generates a ton of excitement, of course, as it should. But it also causes some concern for some hardcore whitetail nuts, who worry that the sudden and sharp increase in hunting pressure will put the kibosh on natural daytime buck movement. I say, bring it on. Because if you know what you’re doing, you can use that pressure to your advantage.

The worriers aren’t wrong exactly. There’s no doubt that the influx of human activity in the deer woods that comes with the gun opener will, in fact, squash a certain about of natural daytime movement. But it will be more than made up for by unnatural movement—that is, deer jumped, pushed, nudged, skedaddled, or otherwise put on their feet by your fellow hunters. What you should keep in mind is that when faced whitetails don’t leave the country. Instead, they dash or scurry away for a short distance, and then quickly settle into the closest security cover they can find. Once there, they’ll settle down and get on with the stuff that whitetails do; eating, sleeping, and searching for the next hot doe. If you know where the best security cover on your property lies, and you know the routes deer will take to get there, you’ll be sitting pretty. Basically, you’re a poster, waiting in the primo spot, during the season biggest deer drive.

While the main pulse of breeding has passed, there are still plenty of late-cycling does entering estrous, and the biggest bucks—the ones with the most stamina—are still looking for them. This phase of the rut known as pick-up breeding, and if you’re set on tagging a monster, this is a good time to do it. The firearm-season opener isn’t going to keep these bucks from searching for and finding mates, but it will shift the action to thicker cover, sanctuaries, and overlooked pockets where deer aren’t usually bothered. While the rut remains primary in the minds of hunters, deer are first and foremost concentrating on survival. In order to stay plugged in to rutting activity now, focus on places other hunters simply don’t—or won’t—go.

The best tactic for the gun opener or any time there’s heightened pressure is simple: Wriggle into the densest security cover or sanctuary and let other hunters push deer to you. Or, even better, hang a stand in a funnel that channels deer into that safety zone from multiple directions. The area in question might be an impenetrable thicket, and nasty swamp, or a sanctuary you’ve purposely set aside. As long as it’s a place deer will naturally flee to in order to escape pressure, you’re good. My all-time favorite place is a dry spit of land that separates a small duck pond from a bigger lake. There are multiple clearcuts and a pair of swamps in the area, and deer are constantly moving between them via the funnel. When I can handle it, I pack a lunch and extra clothes and try to sit all day. I’ve seen bucks from the crack of daylight all the way until last light.

And keep in mind that an are doesn’t have to be thick or nasty to function as escape cover. The far side of swamp, river, or even a skinny trout stream most hunters won’t bother to cross can be just as good. Bust out the hip boots, waders, or canoe—whatever it takes—to cross the barrier in the predawn, and then got the highest cover around and hang a stand or use a climber or create a natural blind. Deer escaping hunters will cross the water without hesitation, and then proceed to the high ground—right to you.

If you’ve got restless leg syndrome, still-hunting the edges of thick cover is a fun tactic that can be highly effective now. Go out early in the afternoon. This way, deer bumped by hunters leaving the woods in the late morning will have had time to settle down. Also, it puts you in position to take advantage of deer push to you when the afternoon wave comes in. I like to stick right on the edge of a clearcut or swamp, which gives me the chance to spot a buck in the thick stuff, or catch him moving into it. In farm country, try still-hunting overlooked hideaways, like abandoned farmsteads, brushy fencerows, and small woodlots. Stay on the edge of the downwind side, move slowly, and glass frequently. You may just spot a giant or a breeding pair and be able to slip in for a shot.

Kansas outfitter Tim Clark takes advantage of a windy day by taking clients to any of several knolls in open country to glass for a breeding buck and doe pair. “It’s not only a great time to get a break from a tree stand, but I’m convinced these windy days make bucks push does out into pheasant and quail cover. I think it’s because the wind robs them of their hearing, so they like to be where they can see. Many times all you get is a twitching ear or a glimpse of a tine, but that’s all you need to set up a stalk. The wind helps you get close for a shot, too, because with everything blowing back and forth, deer can’t see you as well as you stalk.”