Big bucks will be on their feet Monday to feed and look for late-cycling does. Get out there and follow these two tactics to tag a late-season giant 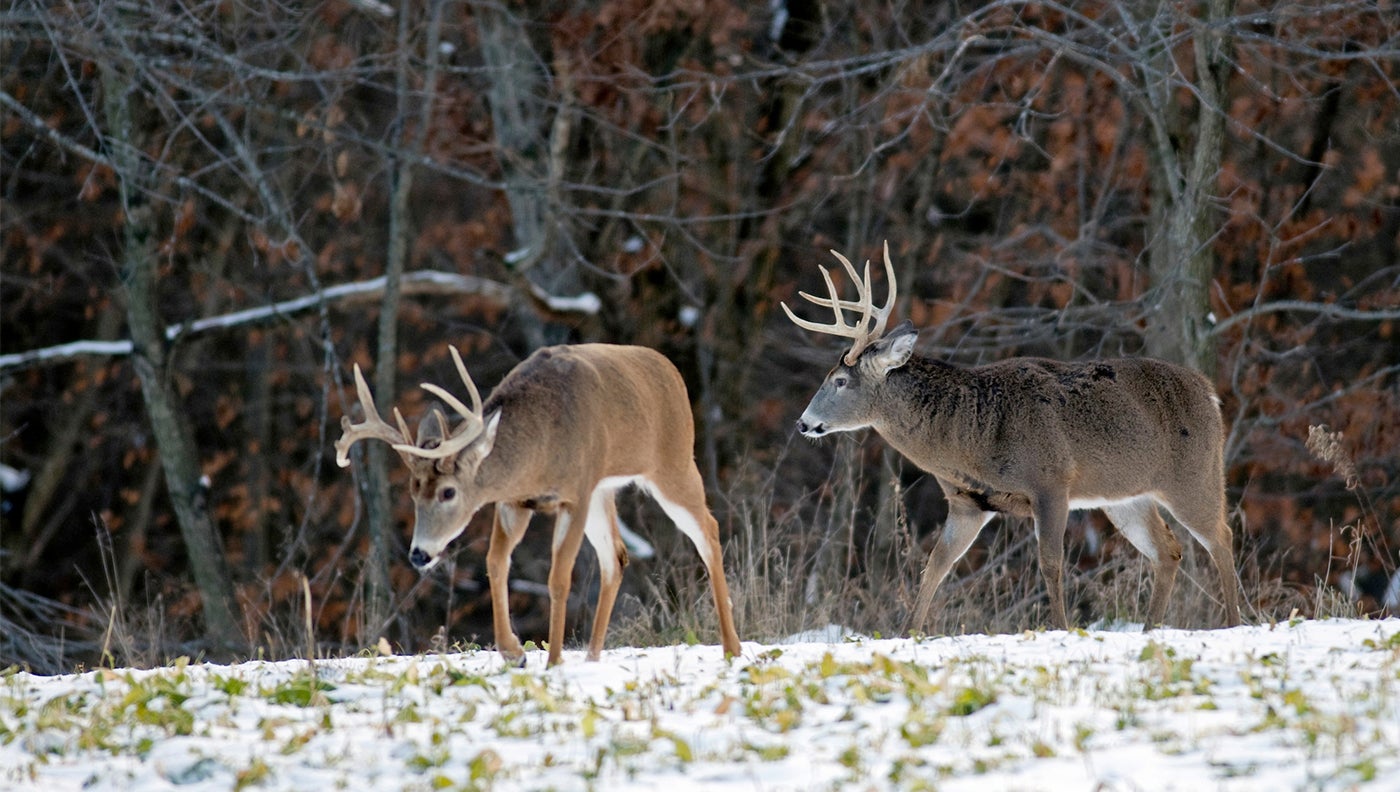 A pair of late-season bucks hit a food source to eat and look for does. John Hafner Photography
SHARE

November is gone and the main rut is over. But don’t let either of those facts keep you on the couch. This coming Monday is the last best day of the 2022 whitetail rut, and it’s going to be good. I have actually come to believe that the far-more subdued rutting activity that comes roughly one month after the Big Show, combined with the often-bitter weather of the late season, is just as good a time to fill your tag as the main rut, especially if you’re after a particular big whitetail. As I’ve pointed out before, it’s the mature bucks that have the stamina to keep searching for the few does that will come into estrous now, and the coming winter also spurs them to start feeding heavily. Both factors make big bucks far more predictable now, and, as a result, the game gets a lot simpler: Find the hottest food source, and wait them out. Whether bucks are hitting prime food sources to find hungry late-cycling females or to fill their own bellies, there’s a good chance they’ll show up this coming Monday.

The secondary rut is real, and you can absolutely take advantage of it as a hunter. But you need to understand that everything about it is subtler. Bucks must now focus on feeding, but the second a bit of estrous scent hits their nostrils, their priorities will switch from supper to sex in a heartbeat. Any does that weren’t successfully bred during the main rut will come into estrous now, and so will many doe fawns, which routinely cycle late. The total number of females interested in breeding at this stage is small compared to the main rut, but it’s enough to keep bucks looking for any opportunity. Rubbing and scraping can tick up now and is often easy to find, as bucks lay it down next to the very food sources they’re hitting hard. Unlike the pre-rut and rut, when bucks are running big, they now bed close to food and breed when a hot doe falls in their lap. Finally, since the number of does entering estrous is drastically reduced, when one does pop she can attract multiple bucks, which can result in some serious action.

December 12 Morning Hunt Plan: Slip In or Sleep In

If you’re serious about tagging a big buck this time of year, I think you are usually better off scouting in the morning and focusing your hunting effort in the afternoon. Deer do not stray far from the best food sources now, and these can be impossible to approach in the morning without running the risk of spooking the very buck you’re after, at a time when all deer are ultra-wary to begin with.

Now, if you have the perfect spot, like a south-facing slope with the the food at the bottom, and you’re sure you can approach from the top and slip in unnoticed, then, sure, give it a shot. But be honest with yourself: if you’re not sure you can get in and out of a morning spot, don’t go. Instead, sleep in, eat a good breakfast, and head out for a late-morning to midday scouting run if you’re a big-woods hunter. Carefully inspect food sources like oak stands and clearcut edges at midday and look for fresh feeding sign. If you have fresh snow, the best tracks and tails will be obvious. If you find fresh rubs and especially scrapes nearby, hang a stand right there.

If you’re a farmland or otherwise open-country hunter, you’ll need to get up early so you can glass the hottest ag fields and food plots at daybreak. If you have multiple food sources, focus on the ones adjacent to south-facing slopes. Your goal is to spot a nice buck moving off the feed and into cover; you’re trying to put him to bed, just like you would a spring gobbler. If that’s not possible, walk those same food sources looking for the best entry trails and note any buck sign. Either way, you want to hang a stand or identify an existing stand that’ll let you cut that buck off when he comes out to the feed in the evening.

Let’s assume your morning scouting paid off and you put a buck to bed or nailed down some awesome feeding sign and trails leading to the grub. For the afternoon hunt, you want to get in plenty early so you have time to set up as quietly and cautiously as possible. It pays to be super-paranoid about setup now, as whitetails have been through weeks of hunting and are keyed in to any unusual sights or sounds. If you didn’t find the perfect stand site earlier, now is a good time to simply wiggle into a blowdown or ground blind you make out of natural material. Getting in early is doubly important if it’s very cold out, as I’ve seen monster bucks feeding hours before sunset in bitter temps and actually heading back to cover when other deer were still pouring on to the food. Carry your calls and rattling antlers now, but only use them on a mature buck you can see and is clearly not coming in for a shot. Start with grunt or bleats and save light rattling as a last resort. I’ve seen sparring matches and mild fights now, but the sounds of two bucks going at it usually spooks does this time of year and that’s the last thing you want to do now. In all likelihood, if you’ve done your scouting well, you won’t need your calls or your rattling antlers. You’ll simply need to wait for that big boy to show up—and make a good shot.

Midwest expert Mark Drury of Drury Outdoors says that trail cameras can save him a ton of scouting now, but he uses them differently than he does during the rest of the season. “Instead of setting them on trails entering a food source, I’ll put them on a tree at the far end of a field or food plot, facing the prime feeding area,” he says. “Then I set the cam on ‘Field Scan’ (or time-lapse) mode, which takes pics at a set interval and only during daylight (if you select that option). Getting those Field-Scan pics will help you nail down the trails deer prefer to use as they hit the feed and, of course, when they use them. Even better, you’re not spooking super-wary deer by taking in-your-face night pics.“