Black Powder and Bushytails: How to Hunt Squirrels With a Muzzleloader

If you think squirrel hunting is too easy, it's time to break out the muzzleloader 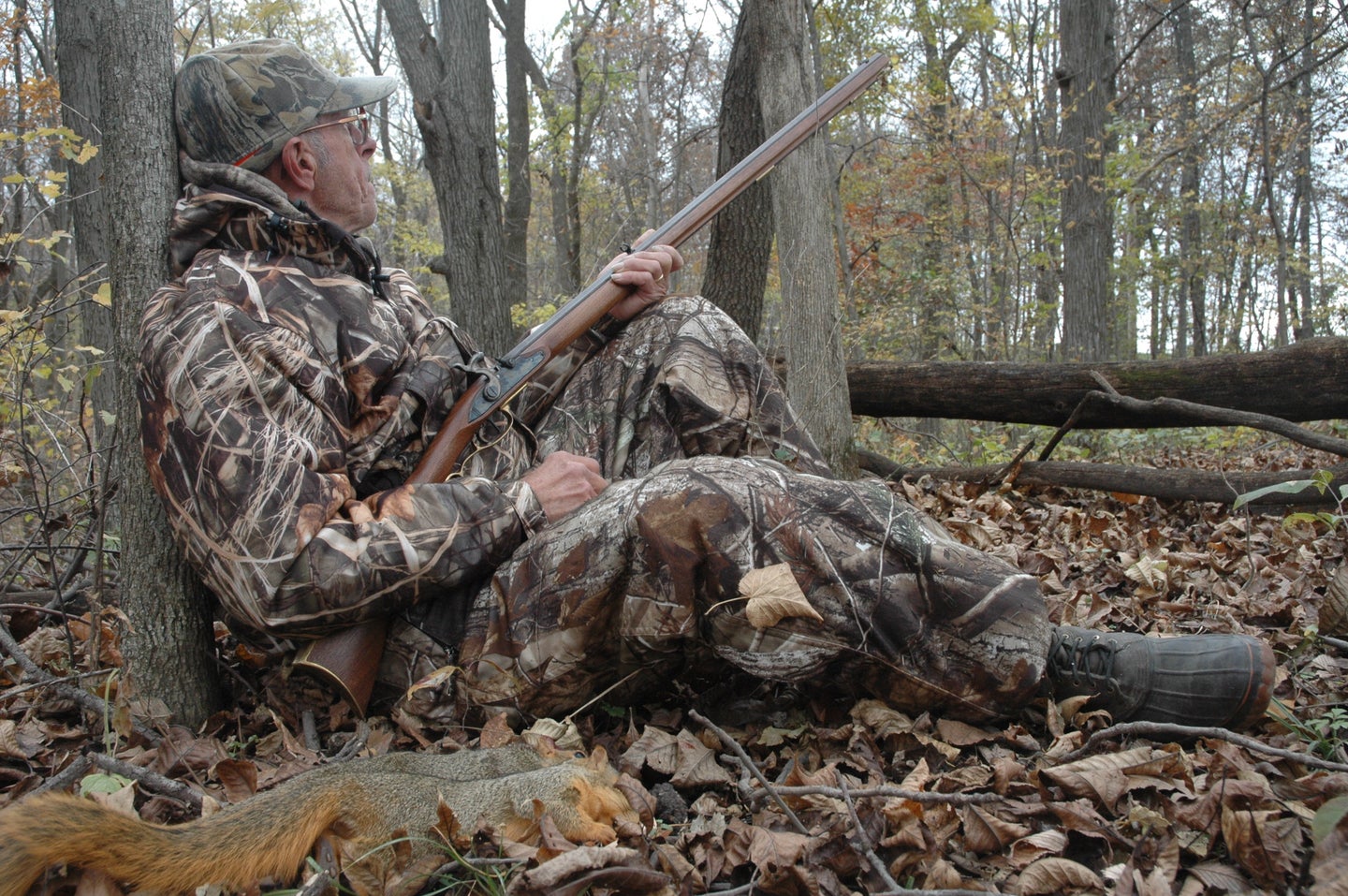 If memory serves me right, I shot my first squirrel, which was incidentally my first game animal, in 1972. I was eight at the time. My father, Mick, was there—observer, educator, guardian, coach, and counselor. The place was Howard Klingeman’s woods; the gun, a single shot Harrington & Richardson .410.

Dad found the bushytail, a big ‘ole fox squirrel, cutting in a hickory tree. He called me over with a wave of his hand and stood over my shoulder as I made the transition from boy to young hunter.

Klingeman is gone now; his woods, too, replaced by a handful of rustic homes, none with the character of the old man’s two-story farmhouse. But in the almost 50 years since that day, I’ve never lost my love of squirrel hunting. What I have done over the years, though, is try any number of things to put a little spice back into the squirrel hunting game. I’ve switched to a bolt-action .410, limited myself only to .22 Shorts, tried a scoped .22 semi-automatic pistol, and even a Crosman .22 caliber air rifle.

But it wasn’t until I carried a muzzleloader into the squirrel woods that I found my salvation. Now this, I’ve told myself time and time again, is the way squirrel hunting should be done. It’s not for everyone, I realize, but if, like me, you’re looking for a way to truly test your mettle when it comes to all-round hunting skills like woodsmanship, stealth, camouflage, marksmanship, observation, and certainly patience, then black powder and bushytails can definitely provide that challenge.

My Favorite Muzzleloaders for Squirrel Hunting

I actually have three muzzleloaders—two shotguns and a long rifle—that I’ve taken afield for squirrels. The first is a Thompson/Center (T/C) New Englander, a nice piece featuring quick-change interchangeable 12-gauge and .50-caliber barrels. She has a straight cylinder choke, meaning I have to choke the charge by the way I put it together. The gun uses percussion caps and it’s lightweight, pretty enough, and easy to maintain.

The second is a side-by-side (SxS) 12-gauge made by Davide Pedersoli—The Classic Standard—choked Cylinder and Modified. It’s a beautiful shotgun, very manageable at 7 pounds, and doubles during late Fall as a dandy waterfowl and upland bird gun.

But it’s my third muzzleloader,  the long rifle, to which I’m partial. Also made by Pedersoli, it’s a Frontier-style rifle in .32 caliber. Surprisingly enough for a 55-inch-long rifle, the gun is amazingly well-balanced. And at only 7 pounds, it’s certainly not a burden to pack all morning. As for accuracy, she’s as straight-shooting as any .22 LR I’ve worked with, and has no problem hitting anything my 57-year-old eyes can see, including the golf ball-sized noggin of an old fox squirrel.

Sadly, finding muzzleloading shotguns and small-caliber rifles has become a challenge over the past two decades. There are online sources, of course, as well as North American distributors of Davide Pedersoli products, including Dixie Gun Works (Tennessee), The Italian Firearms Group (Texas), and Taylor’s and Company (Virginia). Used muzzleloaders are another option, with local firearms dealers, pawnshops, and Internet auction sites such as gunbroker.com, gunauction.com, and gunsamerica.com all presenting possibilities. Typically, though, finding something like my Pedersoli .32 long rifle is going to take some hunting.

Powder, Shot, and Primers, For Squirrel Hunting With a Muzzleloader

As with any modern shotgun or rifle, determining the charge with which each of my three guns performed best was a matter of experimentation, trial and error, and, most importantly, a commitment to range time.

For the shotguns, the load in both the T/C and the Pedersoli are identical, consisting of 70 grains of GOEX FFg (2F) traditional black powder, a BP12 shot cup, and BPGS gas seal (NOTE: An Old School Remington Power Piston also works) one ounce of lead #6 shot, and a .035” M/L cardboard overshot disk/card, all sent downrange via a #11 RWS percussion cap. What about muzzle velocity? As much as I hate to admit it, I don’t know; however, it appears adequate and doesn’t seem to matter much to the squirrels on the receiving end.

The .32 caliber long rifle took a little more time to demystify, but the recipe is just as simple beginning with 20 grains of Hodgdon Triple 7 FFFg  (3F) granulated powder. I set a .315 diameter .32-caliber Hornady round ball atop a thin cotton patch lightly lubed with Bore Butter, and press it home firmly. In the field, clean-up between shots takes seconds. The recoil is practically non-existent, and accuracy is comparable to any .22 LR I’ve owned.

In both cases—shotguns, and the long rifle—I use an RWS (Dynamit Nobel) 1075/#11 percussion cap. These German-made caps are often hard-to-find, but I find them to be hotter than other caps I’ve used over the years. This provides surer ignition, particularly in 90-degree percussion guns. They’re also more consistent and reliable in all kinds of weather.

What to Pack in Your Possibles Bag

A possibles bag is the black powder hunter’s do-all gear pouch. I use an older style Avery Outdoors Power Hunter blind bag as opposed to a more traditional leather satchel. Admittedly, I pack more afield in this pouch than perhaps necessary, but long ago I learned it’s better to have something and not need it than vice versa. That said, my squirrel hunting possibles bag will contain:

With the above gear, I can do just about anything I need to do in the field, short of completely breaking a firearm down to the last remaining bolt; however, should that be necessary, I’m likely headed home anyway.