The chase is on. Be sure to hit the deer woods this Saturday and use these two tactics to meet up with a big rutting buck 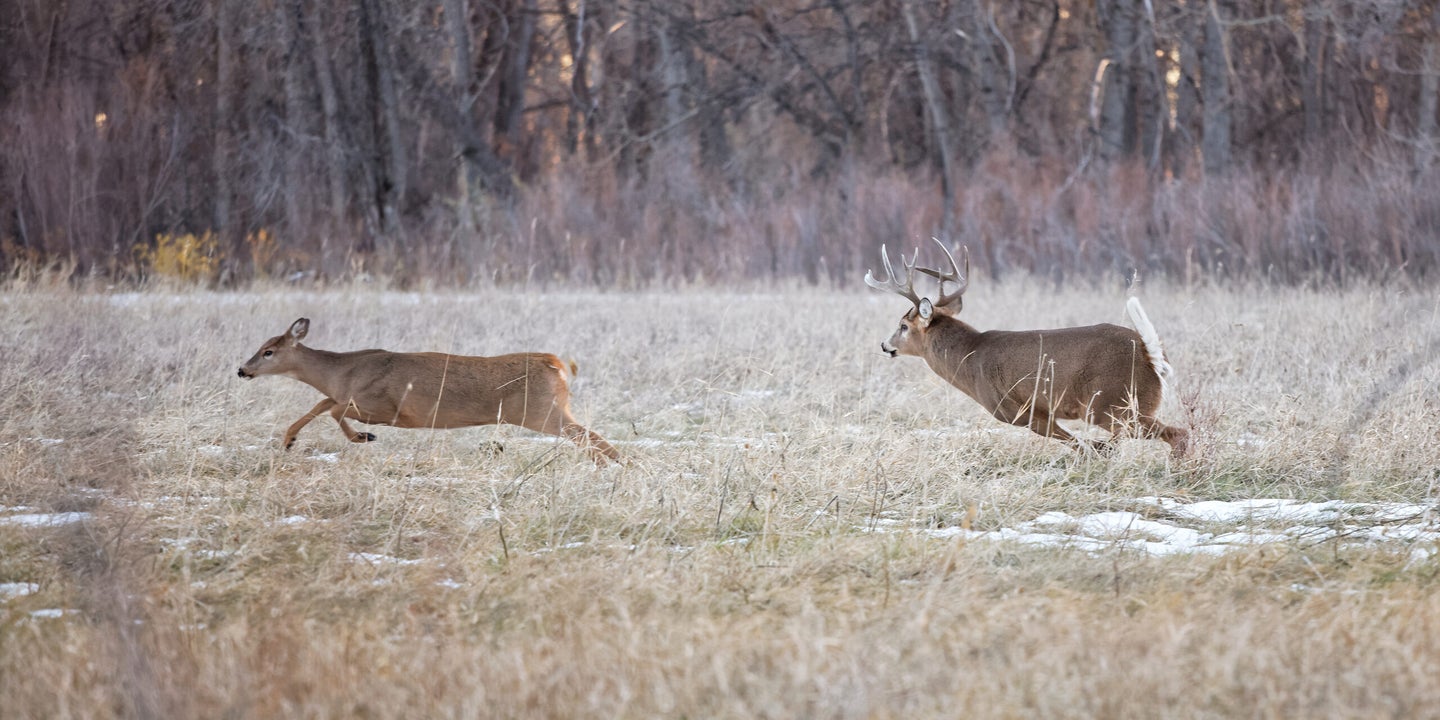 Plan on the chasing phase of that rut to explode into full swing starting today. David C Stephens / Getty
SHARE

Now we’re getting into the heart of the rut. Bucks have been seeking does and sniffing around, but now it’s time for wild chases through the timber, buck fights, and frenetic behavior of all sorts. It’s an incredible time to be out there.

Sign-making, while not totally forgotten, is quickly becoming less of a priority for most bucks. They are now laser-focused on does and responding to the stimuli—the sights, sounds, and smells—that exist as more and more does come into estrus. Make sure you’re out there for all the action this Saturday. If you hit it right, you could lure in the buck of several lifetimes with nothing more than a simple grunt on a tube call or tickle of the ratting antlers.

Related: The Best Days of the 2021 Whitetail Rut

When most hunters think “peak rut,” they’re envisioning the chasing phase, when bucks are basically running at every doe they see. It’s not hard to spot: When you see a doe running for her life with her tongue hanging out and one or more bucks on her tail, you know you’re looking at the chasing phase. Like most rut phases, it doesn’t last very long. I’ve watched a day or three of high activity dwindle to near-zero on a subsequent hunt. The reason? Bucks are running those does because they can smell their near-readiness, and within a few days, the majority of females will be ready to breed. So, also like most rut phases, you need to get on this action quickly. Here are a two killer hunt plans for November 6, one for the am and one for pm.

There may be no time of the fall when so many deer are covering so much ground, all at the same time. Bucks are heat-seeking missiles now and does are the targets, so the highest-odds setups are terrain features that focus deer movement. My favorite is what a lot of hunters in my neck of the woods call a “turkey foot,” which the junction of three (or more) ridges and the trails that meet at that spot. But, really, any spot where multiple deer trails meet can work just as well, including the intersection of two or more fence lines, a creek-crossing fed by several travel routes, or a broad river bottom lined by multiple ridges. All are excellent setups, especially for a morning hunt. But bring extra clothing and snacks, because if the action is steady you might want to stay all day. Definitely bring and use your rattling antlers and calls.

A doe decoy, like this Flambeau Boss Babe, can pull in lone bucks now, as well as real does and their pursuers. Bass Pro Shops

I love using a deer decoy, and I almost always use an antlered one, hoping to punch a buck’s dominance button. But during the chasing phase, I usually switch to a doe; not only are bucks going to zoom in to investigate, but does will as well. One of tricks that a doe being chased hard by a buck will often pull is to throw him off her trail by running toward other females, hoping the buck will get distracted for a few seconds so she can elude the pursuit. And that can put the buck right in your sights.

As with any decoying attempt, you need to place the fake in an area of high visibility, such as a field or food plot, pasture edge, or CRP opening. If I spot a lone buck cruising, I’ll grunt or rattle to attract his attention. But a doe being run by a buck will avoid those calls, so in that case, switch to bleats or bawls to coax her over.

Attracting bucks right now is all about your willingness to use calls, and your ability to put yourself in a position where that calling has the most effect. From morning through the midday, that means funnels that focus buck movement, as hard-running bucks search for does. In the afternoon, focus on high-visibility areas where bucks will look for a mate—food plots, ag fields, oak ridges. Many times a cruising buck will have that “on a mission” demeanor, that may carry it out of shooting range. Get his attention with a grunt, snort-wheeze, or clack of the rattling antlers. You won’t call in every buck you see, but all it takes is the right deer in the right mood, and you’ll be grabbing your bow or gun and readying for a shot!