Want a Real Turkey Hunting Adventure? Head to the Mountain West for a Merriam’s Gobbler

Pure, white-tipped Merriam's gobblers roam public land in the West. But to tag one, you might need hike miles into the backcountry and sleep under the stars 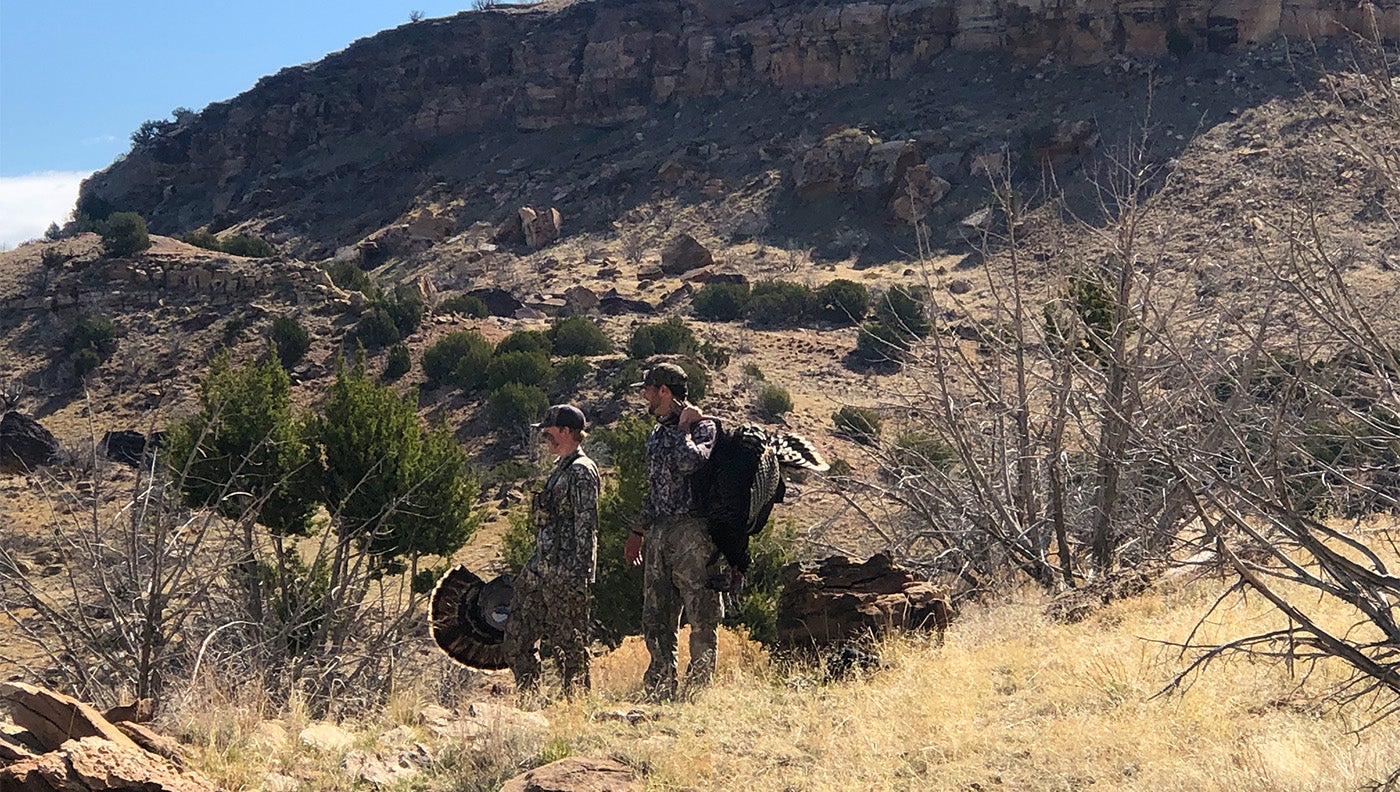 The author son and a buddy leave the Colorado backcountry with a pair of nice Merriam's gobblers. Jace Bauserman
SHARE

When you think of turkey hunting, chances are the word adventure doesn’t spring to the forefront of your brain. Chasing gobblers is a ton of fun and a favorite springtime tradition, but most of these hunts aren’t especially adventurous. You’re probably not going hike through towering peaks or spend a week in the backcountry sleeping in a bivy sack and packing everything on your back. That is, unless you step outside the norm, grab your scattergun, and head for the Rockies or for the vast canyonlands of the West in search of a white-tipped Merriam’s.

As a Colorado native, I’ve chased screaming bull elk in no-name drainages that were so steep you had to lean forward into the mountain to keep from tumbling backward. Last season, I scouted for 19 straight days and hunted for three to take a Rocky Mountain Bighorn Sheep. I know adventure hunting, and I promise that the nomadic Merriam’s subspecies of wild turkey will give you all the western adventure you want and then some. And if you’re one of the many turkey nuts trying to fill a slam and are after a true, pure Merriam’s, with no hint of hybridization, this is the place to find one. Here’s what you need to know.

Western Turkeys Are Like Elk: The First Step Is to Find Them

I’ve found piles of Rio Grande and Eastern birds on public ground throughout the West by driving perimeter roads or climbing ridges and glassing relatively small properties. These birds are not always easy to kill, but the landscape they inhabit makes them reasonably easy to find. That’s not the case for western Merriam’s. The hardest thing about tagging these birds is just finding one.

Mountain-dwelling Merriam’s are nomadic, opportunistic feeders that love to wander. Last season, while scouting for birds in the Rockies, my hunting partner and I watched a pair of toms pitch down from a monstrous ponderosa pine and walk more than 2 miles before we could no longer keep track of them. During their morning jaunt, the birds climbed three mountain slopes. Why? They had no hens. Merriam birds, especially in certain areas, are very spread out. Toms will wander miles in search of a hen. So, one key to being a consistent Merriam mountain killer is to hike miles and miles and be prepared to sleep under the spring stars.

The birds don’t spend their entire year in high country, of course. They congregate in private lowland areas during the bitter winter months, including cattle pastures, low-elevation meadows, and agriculture fields. When spring temperatures begin melting the snow, birds move up into the mountain slopes. During the early season, they’ll dwell just below the snow line. Depending on timing and snowmelt, I’ve found mountain birds anywhere between 6,500 and 10,250 feet. Later in the spring, when the only remaining snow is covering mountain peaks, Merriam birds will climb high, where the newest green shoots are emerging and bugs are everywhere.

Driving forest access roads to find Merriam’s is never a bad idea, as you may glass up birds or find tracks in the snow lining road edges. Most often, however, it’s best to do what you would do on a mountain elk or mule deer hunt, which is toss a pack on your back loaded with a day’s worth of supplies and stretch your legs.

As you hike, keep an eye peeled for tracks, droppings, and turkey feathers. But also listen When roaming the mountains or canyonlands, I often find birds with my ears. Merriam gobblers love to throw their necks out and let it rip. Each time I top a ridge, plateau, or slight rise, I stop and listen. If I don’t hear a bird, I send a few loud yelps or blow on my hawk-screech locator call. This call cuts the western wind and will rattle a bird’s cage from a long way off.  When yelping, start soft to ensure you don’t blow out a close-by gobbler. After that, get loud. A raspy box call or glass- or aluminum-face pot call is the ticket. Keep in mind that Merriam’s birds have the weakest gobble of all subspecies. I’ve watched several birds stretch their neck and gobble through my optics but not been able to hear them. So if possible, get the wind in your favor (blowing toward you), and you’ll have a better chance of hearing a gobble.

When hunting Merriam’s turkeys on western public ground, running out of room is never a worry. Public acreages are usually measured in thousands of acres. For this reason, if you’re looking to get wild, strap a multi-day pack on our back and go deep. Years ago, after spending an entire day hiking and hunting and not seeing or hearing a bird, I pitched camp and slept under the stars. The following morning, after walking 5 miles into the head of a canyon, I found 12 Merriam’s gobblers and a passel of hens. I was 14 miles from the truck, and I’m confident these birds had never seen another human before. Five of the 12 longbeards came running to a single hen yelp.

Not only can you find isolated turkey hotspots by going deep, but chances are good you’ll find some excellent deer and elk spots you can plug into your digital mapping app for later. I always use western springtime turkey hunts to find great deer and elk dirt.

Once You Find Turkeys, Don’t Overthink Your Strategy

Merriam’s birds respond exceptionally well to calls, especially if they haven’t been pressured. If you’re working toms on the roost and those birds have hens, let the attitude of the hens dictate how and when you call. If you can get into a back-and-forth conversation with the boss hen of the mountain, chances are good she will drag the tom close. If the tom or toms don’t have a hen, they’re apt to pitch down and run to you. These birds are used to walking miles and miles searching for love, and when they think a hen is close, they can come at full tilt.

The midday hours are my favorite time to call in and kill a mountain bird. When hens leave the toms then to go sit on nests, the gobblers become more vulnerable. Let the attitude of a midday tom tell you how much and when to call. If the bird or birds are answering every note and gobbling on their own, you can’t get too aggressive. Let ’em have it.

Decoys aren’t a must, especially if you set up in the timber where a bird will have to come looking for a hen. That said, I have used a full-strut reaping-style decoy in recent years in situations when I know other hunters aren’t competing for the same bird. These decoys are light and easy to transport.

In any case, decoys or no, the trick to killing a public-land mountain Merriam’s is having the desire to cover lots and lots of ground to simply find some birds to hunt. Once you do that, odds are very good that you’ll come out of the mountains with a white fan bobbing over your shoulder.