Fowl Play: How to Pick (and Shoot) Your Teal in a Tight Flock

A good teal hunt doesn't require much in the way of gear. But it does take some quick shooting. Here's how it's done 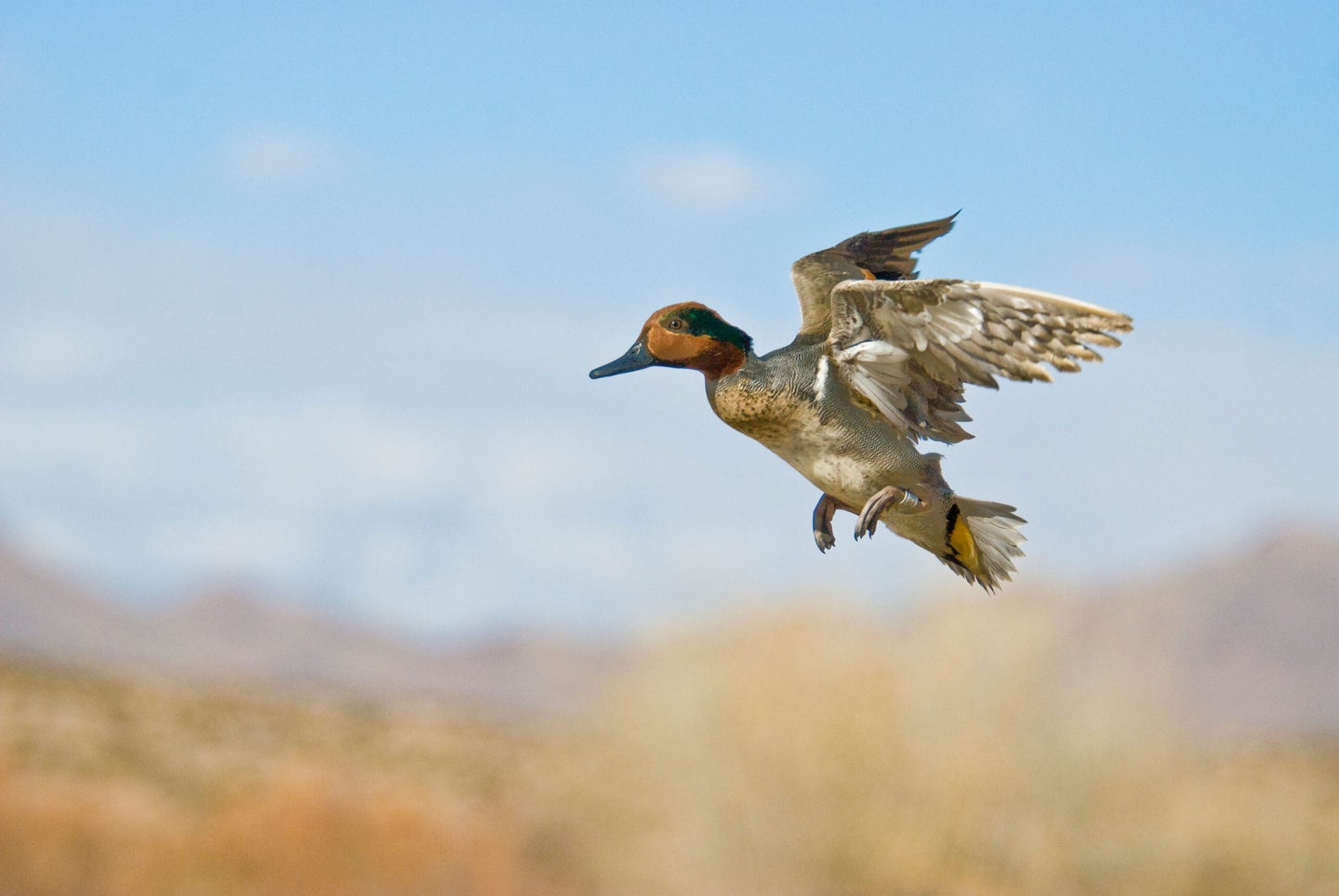 Teal hunting doesn’t have to be gear-intensive. A few decoys, a spinner, a gun, and bucket apiece was all we had to carry on the long walk in. We set our buckets in some tallish weeds and put the afternoon sun to our backs. It wasn’t a hide that would fool big ducks in the regular season, but teal are not particularly detail-oriented. It’s one of their many charms.

We sat, brushing away the occasional mosquito, studying the ducks approaching our spread, holding off on the mallards, pintails, and wood ducks, waiting on teal. “These look like teal,” said Clint as a flock of small ducks flying in a tight wingtip-to-wingtip formation banked downwind of the decoys.

On paper, teal aren’t fast ducks, topping out at 30 miles per hour. In the real world, streaking over the decoys at 15 yards, they go about Mach 2. Even though I had seen them approach, all I had time to do was think, Pick one!  I shot once, was aware of a duck falling, although I was by no means certain it was the duck I shot at. I found a second departing teal and tried to throw some steel at it. The hammer fell on a dud primer, and the flock was gone. The one bird floating dead in the water was the only sign that they had ever been there at all.

The Best Way to Double on Teal

At home, I reviewed the video from the ShotKam I’d put on the gun. If you saw the clip, you’d think I knew what I was doing. The reticle starts ahead of the duck I had picked (I thought I was behind it the whole time) and matches its speed for an instant. As the teal folds up, the reticle goes smoothly up to the second bird flaring up and out of the decoys. It is a dead duck flying…until the primer doesn’t ignite. That’s not how I remembered the sequence at all—it was a blur—but the camera doesn’t lie.

The takeaway: Trust your eye-hand coordination to make corrections you’re not even aware you’re making. Your only job is to look hard at the bird to give your eyes and hands the best possible information, then stay out of their way and let them do the rest. That’s true for all waterfowl shooting, but it’s especially important for teal, which are quick, erratic and take you by surprise. Trying to aim a shotgun at a target like a teal is a recipe for missing.

Teal are so small that if they look like they’re in range, they not only are in range—they are probably so close as to need hardly any lead. Looking at the beak is usually enough to put the shot where it needs to be. Also, teal fly so close together it’s easy to kill more than one with one shot. For some people, that’s a bonus, but I prefer one duck per shot. If you do, too, pick a bird on the edge of an oncoming bunch, or at the very back of a passing flock. Teal will usually flare up after the first shot, so if you are looking to double, pick a bird, shoot, then look up to find another.

As I learned when that dud primer wrecked what would have been a double, ammo reliability matters. That’s reason enough to choose a shell like Browning Wicked Wing made from quality components. For teal, I’d take the Wicked Wing 3-inch 12-gauge 4s. Teal are small ducks and a 1 ¼ ounce load of 4 shot has plenty of pattern density to put multiple hits on a small target. I’d shoot them through an IC choke for teal season. And, while an increasing number of hunters bring 20s to the teal blind, I remain a 12-gauge shooter for waterfowl, especially if the gun is a soft-shooting semiauto like the Maxus II that won’t beat me up, even if I’m only wearing a t-shirt.