Woodies can present some of the most challenging shots in duck hunting. Here's how to connect 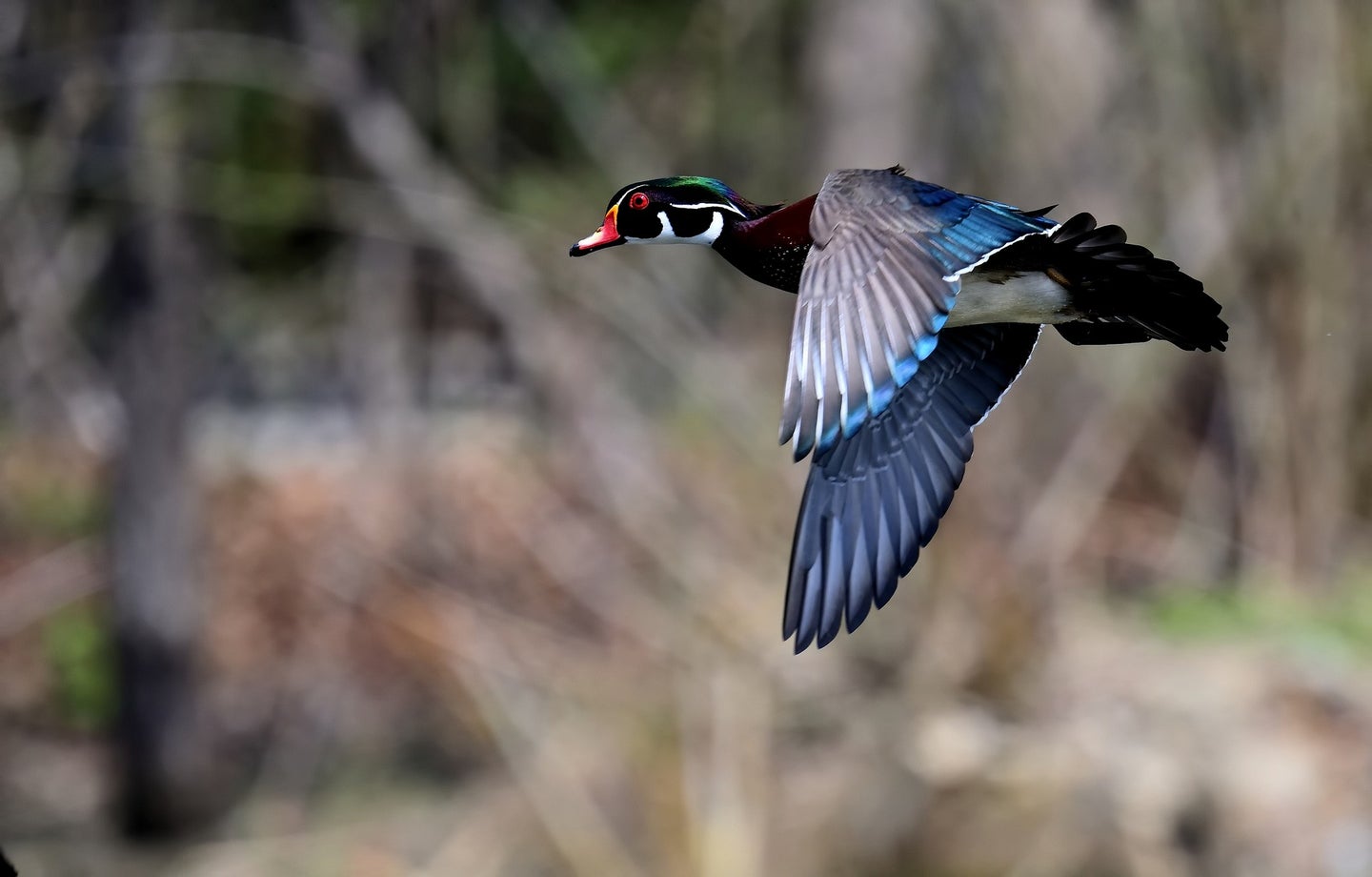 My job was finding ducks for the youth weekend, and I’d struck out all day until my last stop—a shallow wetland with a thick clump of willows in the middle. It didn’t seem like a wood duck spot to me, but evidently several hundred woodies saw something in it that I missed. They rose from all parts of the pond, squealing in protest at my approach. I hid and watched long enough to see the first few come back, then tiptoed away. They were there when we brought the kids back for an afternoon hunt a day later. We ran them out, I stuck a spinner near the willow clump, and we spread out to wait for the ducks to come back.

Kids, shotguns, and wood ducks coming from all directions made for an hour or so of happy chaos. Singles came in from all points of the compass, while the flocks would drop over the willows and bat around the spinner for instant like moths around a candle. The sheer number of ducks—and the fact that we had brought a lot of ammunition—meant everyone went home with a duck or two.

The fast, random flight of wood ducks and their ability to twist and turn in the air, make them among the trickiest of ducks to hit. Also, most wood duck hunts, unlike that one, take place in the first and last few minutes of shooting light. Wood ducks are a challenging bird for anyone to hit, no matter how experienced a hunter they may be.

How to Shoot Wood Ducks

Successful wood duck shooting starts with putting yourself in the right place. Early and late, being able see matters more than being well hidden. In the half-light when wood ducks fly, you can see a duck silhouetted against the sky much better than it can pick you out against the ground. Stand where you can see, and where you can move quickly and in any direction, because ducks will be on you in a hurry. You may have to edge back into cover as it gets lighter.

You don’t get a lot of classic decoying chances at wood ducks. The shooting tends to be improvisational. Hold the gun at ready, muzzle angled up, find a bird, and combine the mount and the swing in one, raising the gun to your face first. Be smooth and, if your move is good, you can shoot the instant the butt meets your shoulder. A wood duck flipping back and forth as it comes in to land is as tricky a shot as you’ll get in duck hunting. Focus on the bird’s head and shoot instinctively. I will admit that as good as that advice might sound, most of the time when I get that shot, I miss with the first try at the dipping wood duck and hit it with the second when it flares and flies in a straight line.

Pick good shots. Wood ducks tend to come all at once, and you don’t want to be stuck with an empty gun at the wrong time—nor do you want to be spending precious flight time chasing cripples. If a wood duck doesn’t give you a good shot, be patient. Another one will be along in a minute.

Practice your fast reloads. Some wood duck hunters keep a couple of extra shells between the fingers of their front hand, and this is a good time to mention the speed load feature of the Maxus II. When the gun is empty, you slide one shell halfway up the magazine tube and it whisks into the chamber, getting you back in action in an instant.

Wood ducks are almost always closer than you think they are because everything looks farther away in low light. An Improved cylinder choke and a 1 ¼-ounce load of Wicked Wing 4 shot should give you a pattern that’s open enough to hit with a little more easily, and able to reach out as far as anyone should reach out for a duck in bad light. A wood duck fits in between a teal and a mallard in size, and 4 shot is plenty big enough.