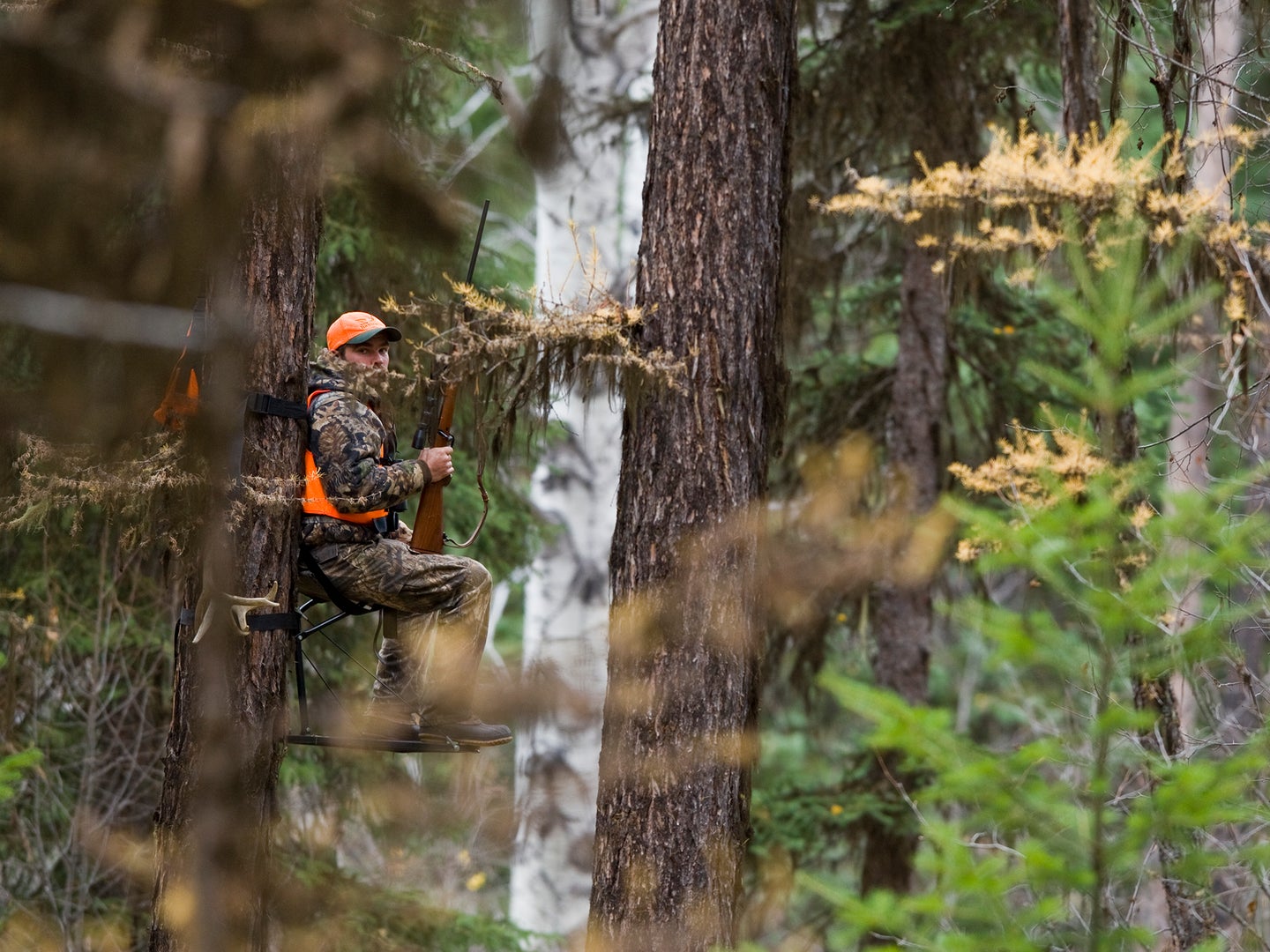 A rifle hunter checks over his shoulder for movement in the whitetail woods. Donald M. Jones

The Lost Art of Sitting Still in a Deer Stand

These days, there is no shortage of distractions to help you pass the time in a treestand. But if you give in to them, you’re missing the point

WE CALLED IT the Cove—and oh man, it was a gorgeous place to hunt. Run a climber up a tree and I could see along the bank of the creek for 75 yards, with deep views into the hardwoods. A low, flood-prone opening was ringed with greenbrier and blackberry, like a timbered lagoon, and trellised with deer trails. This deep in the woods, this far from the road, the whitetails didn’t seem to mind crossing the opening. There didn’t seem to be anywhere danger could hide.

But the tree with the best views, and open shots in the most likely directions, was a tall silver-barked tulip poplar smack in the middle of the Cove. It was void of branches for 30 feet. Perched up there, I wasn’t skylined, but I still stuck out like a wart on a nose. The only way to hunt that tree was to get in there early, get into place, and stay still. And I mean still.

Of all the hunting competencies, simply sitting still might be the most threatened. It gets more and more difficult, even for those who embrace its primacy. The number of potential distractions is ever growing, at the same time that new technologies whittle away at some of the time-honored abilities that have long been required to consistently and purposefully kill big-game animals.

But I love settling into a treestand and turning to stone. I don’t dread a three-hour, open-air sit, and I greatly prefer ladder stands or climbing stands with little to no artificial cover. Sitting in a plywood box, or a pop-up blind, just isn’t my game. I relish the high-stakes feeling that every move—every nose scratch, every head swivel—is fraught with the danger of discovery. I enjoy the mental boxing match required by not moving. And, just as importantly, I want to see every square inch of the world I’m attempting to inhabit. I like a 360-degree, forest-floor-to-sky unobstructed view so I can watch the nuthatches as they walk down the tree trunks upside down, and gawk at the bobcat that cleans its fur on a sun-drenched log near my tree, and see the shadows of squirrels climbing the shadows of trees on the ground. I don’t get up at 4 a.m. and drive an hour in the dark to miss a thing. The itch I want to scratch is to be a part of the woods, as much as possible, and for my presence to be absorbed by the forest. To be a living thing, yet indecipherable to all the other living things. That comes with a cost I’m happy to pay. Up there—out there—it’s just me and my will to Not. Move. A. Muscle. At least, not for as long as possible.

An hour into the sit, 20 feet up the poplar, I fight the fidgets. I’m not immune to the temptations of a good stretch. My butt gets sore and my back aches. But the quieter, and the stiller, I remain, for as long as I can manage, the more likely it is that I will get what I came for—which is both a deer and not a deer. I want the woods to forget my intrusion. Maybe it’s because I’ve actually taken up yoga of late that I believe stillness ripples outward, in all directions, no less than the sound of a cough or of a candy bar wrapper being opened. Being still in the woods is not some monkish withdrawal. Indeed, on a hunt, stillness is precisely the opposite: It is an immersion.

And I’m not always a treestand stoic. Sometimes I hunt with a group of friends for whom texting each other is an integral part of the experience. We pretty much fill the woods on a small family farm, and text smack talk and updates on every deer sighting like a bunch of K-pop fans. It’s just a part of the fun of that particular weekend. I’m not a Pharisee. Not every trip to the woods has to be a sacred experience.

But most of the time, I take a seat, and a deep breath, and do all I can not to do anything at all other than look, and listen, and let the stillness flow.

There. There she is. The stillness casts every movement in the woods in greater relief. All I see is a single, half-hidden step, the subtle movement of a hoof at 80 yards into the woods. Screened by brambles, she lifts her head to chew, and when she puts her head down again, behind the tangles, I shift the rifle so the muzzle points in her direction and raise the stock to the pocket of my shoulder and I wait. I’m not going anywhere, and I don’t have anything to do. Except stay still and, when the moment feels right, squeeze.