Got a Huge Buck on Camera? Here’s How to Not Screw it Up On Opening Day

With only weeks until the bow opener, it’s not too soon to get careful 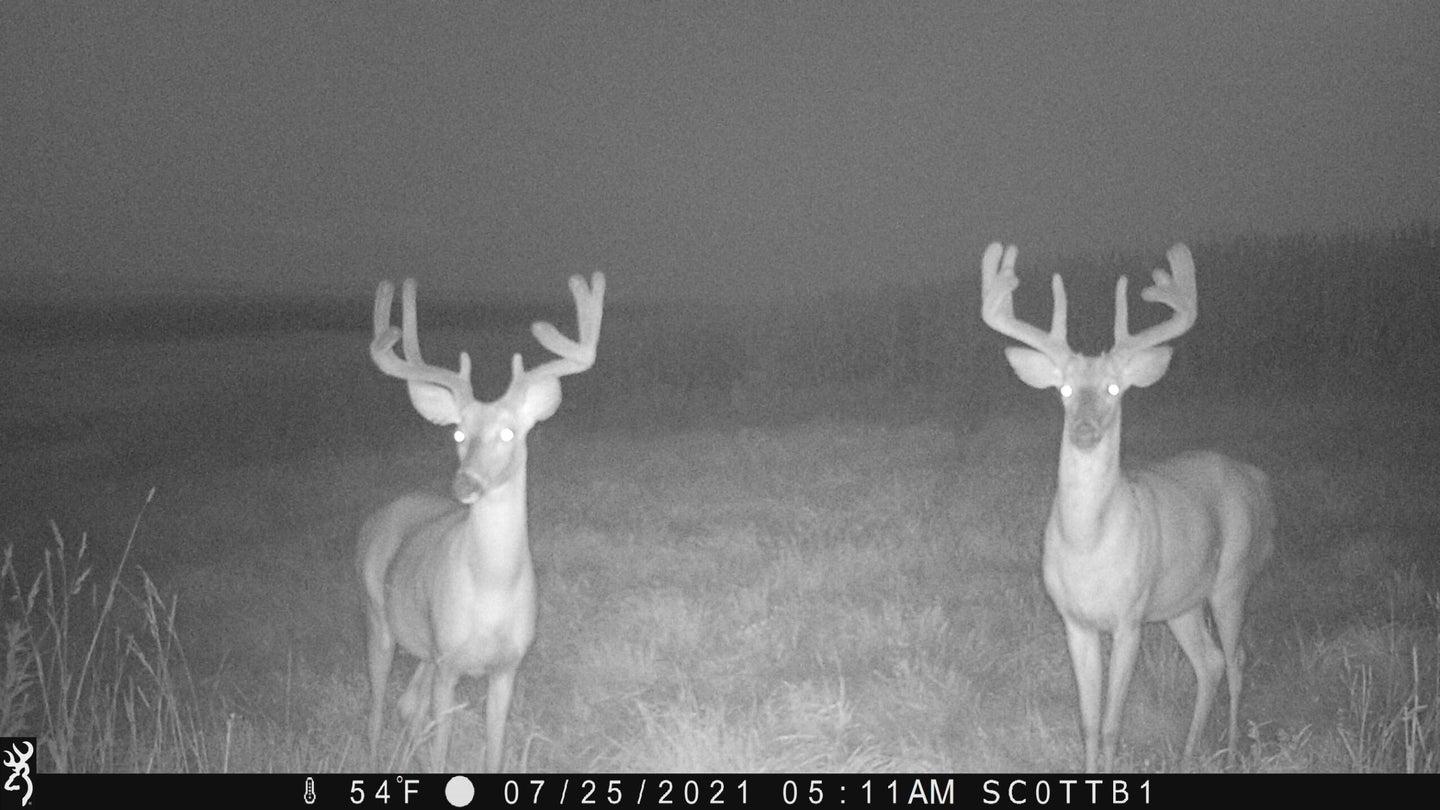 If you see a couple of bruisers like these two, you're going to need a plan to arrow one of them on opening day. Scott Bestul
SHARE

There are summer trail cam pics, and then there are THE summer trail cam pics. I got a few of the latter this week. I guess a pair is not a bachelor group, but the towering 8-point and the heavy ten seem to be buddies, and I would take either one that walked by my stand in bow range.

Only a few weeks ago, this series of pics would be exciting and entertaining, but not much else. Right now, with archery season only six weeks away, the pics are borderline critical. Because I received a series of them, spread over several days, from the same camera, I know I am at least close to the core area of this magnificent pair. And since I’m pretty addicted to early-season hunting for mature bucks, it’s time to change up some of my pre-season behavior if I’m going to have a shot at one. Here’s what I plan to do.

You still need to check your trail cameras. Just do it more carefully.

I’m not much of a deep-cover camera guy; I like field-edge or food-plot setups that don’t mess with a buck’s safe spot. So I’ll maintain that general principle and keep my cameras out on the edges. What I will definitely do is commit to changing SD cards at midday, and only once a week. I’ll also make my stops as quick and noiseless as possible. The area where I’m getting pics of these guys is marked by ridgetop farm fields and short bedding points just off the fields. In other words, these bucks could be bedding within easy hearing—and perhaps seeing—distance of me when I check cameras. I actually like the idea of normalizing my presence for these deer, but at the same time, I don’t want to push my luck. If I make enough of a ruckus, they’ll simply relocate to a spot where they feel safer.

Break out the glass and don’t get too close.

Cameras can reveal important information about whitetails, but they rarely tell even close to the whole story. As the season draws near, I will spend evenings glassing the fields where I got the photos of these deer. I like to set up with a binocular or spotting scope and observe at a distance, staying in my truck when possible, and setting up in a discrete location (I like to tuck into a cornfield or wiggle next to a round bale) when not. Even more important is a fail-safe exit plan. I almost never set up on the field or plot I expect the deer to feed to, but rather, one that allows me to observe from a distance. Then, when shadows get long or the sun disappears, I’m out and away, with the bucks unaware they’ve been spied on.

This step is important because it will reveal specific spots where early-season bucks are entering fields (and by default, offer hints at their bedding spots). Without this step, and relying solely on camera info, I’m really only making educated guesses. And if these are wrong, I can blow it big time on stand placement. You rarely get multiple swings at a mature buck on an early fall feeding pattern and it’s critical to get it right the first time. Not even cameras are good enough when it comes to this.

Set up your tree stand with surgical precision.

I’m like a careening ping pong ball when it comes to scouting stand sites in spring and early summer. I’ll bomb through bedding areas, tromp through terrain funnels, and sniff out trail intersections like a hound dog working out a scent. Well, the window for that activity is, if not shut altogether, closing fast right now. When I hang a set now, it’s a carefully thought out procedure that goes as quickly as possible.

I start with picking a specific area where I know (from glassing and cam pics) where my target critter is entering a field. If I’m really lucky, I might even be able to spot a sentinel oak or basswood growing within a bow shot of these entry trails during my glassing sessions. If so, I drive (yup, trucks or an ATV is almost always better than walking) directly to the spot, make sure the tree is straight enough for a stand, and determine how much brushing I’ll need to do to create a shot (the less, the better).

At this point I rarely have a stand with me; I’m actually scouting the setup and determining the fastest, most efficient way to get a stand hung and prepped. It’s as close to a hang-and-hunt as possible without actually executing one. Once I’ve picked my tree and laid out a brushing plan, I return with the necessary tools, get the job done, and get out. It’s nearly impossible to pull this off without making bucks aware you’ve been mucking around in their world, so your goal is simply to make it an isolated, solitary disturbance that’s over as fast as it started.

When in doubt, back the heck out.

In general, now is the time to start getting careful about minimizing impact on your deer and the world they live in. Obviously, with hunting seasons just around the corner (less than a month in states with a Sept. 1 opener!) it’s tempting to get in that last flurry of stuff we think needs doing before the opener, and of course, there are areas where that can be pulled off. But the list of those spots is literally shrinking by the day.

When I retrieved the pics of those two great bucks, I was obviously excited….and then immediately remembered how I completely wrecked an early-season hotspot just last year. One of the farms I hunt has a secluded clover plot that was being hit regularly by no less than four shooter bucks. The landowner (also my hunting partner) and I have had enough experience hunting that plot that we knew the best way to do so was to get a blind on a platform on one edge. But spring went by, then virtually all of summer, and we just hadn’t made that happen.

Finally, with only ten days to go until the bow opener, my friend finally had some free time. So we went to the clover and spent the better part of two days building a shooting platform and mounting a blind on it. A nagging little voice kept whispering to me that we should have just bagged it for another year, but I managed to ignore those internal warnings and went ahead.

Well, you guessed it. That spot immediately went dead and never really recovered. The intrusive sight of a new tower on a relatively small plot was obviously too much for bucks to be comfortable with. While we had the odd picture now and then, the regularity of visits by mature deer to that spot was completely disrupted—they had other food sources in the neighborhood and obviously decided to switch to them. I’ll certainly make other mistakes in the weeks and months ahead, but that won’t be one of them.