Sure, trail camera pics can give you critical info, but they rarely paint a complete picture 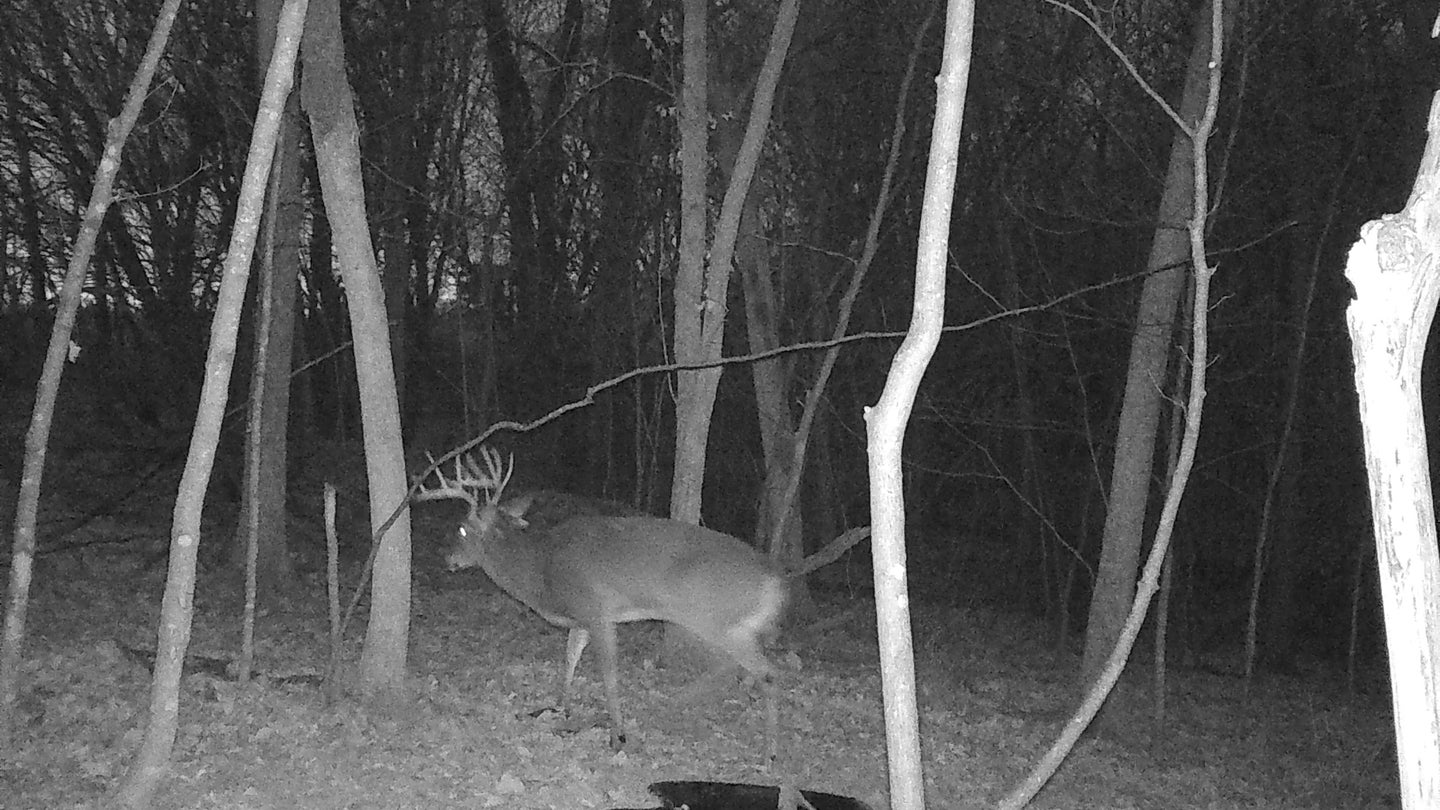 Your trail cams are likely only telling you part of the story. Scott Bestul
SHARE

If you pepper a buck’s home range with dozens of trail cameras, you get a decent idea of where he likes to bed, feed, and chase women—and when he likes to engage in those activities. But let’s be honest. Even with hundreds of images, you’d need as many personal encounters as possible with that deer, and maybe even some drone footage, to truely complete the intel. Then, and I’d argue, only then, would you be close to really “knowing” a buck.

Getting good trail-cam pics of a buck is undeniably cool, and of course they tell us much more about that buck than we knew before we had the shots. But you should never make the mistake of thinking those pictures are the big reveal about an individual deer. Sure they’re a piece of the puzzle, but here are a few things they may not show you.

A buck we called “Crab Claw” was the most vivid example of how trail cam pics can steer you wrong on when a deer moves. While I had quite a few pics of this tall, narrow ten-point from late September through late October, every shot occurred at night. When I showed my dad Crab Claw’s highlight reel one day, he came to the same conclusion that most of us would; “Great deer,” he said. “But he’s nocturnal.” While I tend to run on eternal-optimist mode and wanted to believe the buck was vulnerable, how could I disagree with dad based on the pics?

Problem was, most of my pics came from a pair of mock scrapes located close to my home. When I put dad in a stand overlooking a small food plot on a late-October afternoon, that setup was ¾-mile from those scrapes. Dad saw a few does and glimpsed one small buck early, and thought the action was over with an hour of shooting light left. Then a buck strode confidently into the plot, made a scrape, and walked ten yards from dad’s stand. Pops made good on the shot, and we found Crab Claw after a short track job. Shortly after sunset, we were loading the supposedly nocturnal buck into my truck.

Obviously there are bucks that limit most of their movement to after nightfall. But if all your after-dark images of a buck come from one camera or several cams in the same area, don’t fall into the trap of believing your buck is a vampire. Like Crab Claw, he might be appearing in front of your cams after dark, while he’s happily trotting around during daylight in a different part of his home range. Keep moving your cameras around or, if you can afford it, simply get more of them out there to get a more complete picture.

Read Next: 13 Pro Tips For Getting Better Trail Camera Pictures

Just as with activity periods, trail cams can tip us off to a buck’s favorite haunts. But unless you’ve peppered a huge area with cameras, you’re seeing just a snapshot of his territory. Plus, his appearance there can be the result of external factors; a fresh food source coming into its own, a resident doe or two coming into estrous, hunting pressure on adjacent properties, even a buck out on a breeding excursion that takes him out of his home range for a few days.

Any one of these factors can explain those one-and-done bucks; critters you get a pic or two of, then they seemingly disappear. And then there’s this; some bucks are simply camera-shy. I never used to believe in this much, until I talked to one of my outfitter buddies. Ted had a camera on a favorite pond on one of his Wisconsin farms. And though he had a few pics of a giant deer, the buck seemed to disappear mid-season. “Then I had one of my hunters on a stand near that pond,” he said. “And one evening he watched that buck walk up behind that camera, make just a short loop around it, drink from the pond and leave. I checked that card, and I never had a pic of that buck. He was still using the area—and in the daylight. He’d just become wise to cameras somehow and avoided them.”

Obviously any pic of a buck is good news, and if you’ve got a slew of them you’re a huge step closer to figuring out his favorite areas and when he uses them. But never content yourself with present knowledge. Keep moving your cameras around and seek new information, more pieces of the where-does-the-buck-live puzzle. And if you suspect you’re dealing with a camera-shy customer, try some tricks (like hanging your cameras higher, camouflaging them better, and reducing human scent) in the same area where you grabbed the originals.

One of the most common misperceptions hunters have about big-racked bucks is that they are “dominant” or feared by other bucks in the area. Naturally this is sometimes true. In areas with few mature bucks, any 3-½-year-old will likely rule the roost. But in areas with a solid number of older males, the ones with the baddest attitude can intimidate bucks with much bigger racks, often by just appearing on the scene. Trail cam pics typically do a poor job at revealing which bucks are meanies and, in contrast, their pushover herd mates.

Why is this important information? Because knowing a buck’s personality can influence how you hunt him. For example, if I see a tall-racked ten point passing by my stand out of range, I’m likely reaching for a grunt tube to lure him closer. And if he doesn’t respond I’ll probably pull out all the stops and rattle and/or snort-wheeze at him. But if that’s a sub-dominant buck that avoids fights and confrontations with other bucks, any of these tactics can prove disastrous. If at all possible, I’d like to know where this boy fits in the pecking order before I get aggressive with him, especially if he’s on a natural movement pattern that I can adjust to on a subsequent hunt.

I like to start judging buck pecking order early, often when bucks are still in velvet and in bachelor groups. Just the other day I was scanning some recent pics and noticed one nice 8-point kick at a similar-sized buck as they fed together in a food plot. The kicker will likely be a dominant buck, at least with the deer in that pic, but perhaps with others. One way to further nail this down is to switch cameras to video mode. This allows me a short movie clip into how bucks interact with each other, and if patterns repeat themselves I can make a sound judgement regarding bullies and wimps.

Finally, when it’s time to switch trail cams over to mock and real scrapes, I pay close attention to how a buck behaves at the site. While some bucks skirt scrapes altogether, it’s relatively rare. But my belief is that a sub-dominant buck might visit a scrape just to sniff around and see who’s been to the party recently. Conversely, the bad-boys typically tear into a scrape, working the licking branch vigorously and scraping and peeing on the ground for several minutes. Once again, having cams on video mode can be a huge help here, but even if you’re on multi-shot stills, you’ll learn a lot about a buck’s herd status when you see how he behaves at a scrape.

4) Cameras Can Shrink (or Grow) Antlers

I rarely pat myself on the back when it comes to estimating the gross B&C score of bucks, but I have to admit I used to feel pretty cocky when it came to 2-½- and 3-½-year-old whitetails in my area. After seeing dozens of these deer over the years, I could typically look at a trail cam pic and come up with an estimated gross score within 5 inches or so of the actual, something I’d proven when I (or a buddy) managed to actually kill the buck and put a tape to it.

Then along came a pretty ten point a few years back. Our first pics of him came from the edge of a beanfied, just after the buck had shed velvet. Though he had gorgeous configuration and solid tines, everything about the rack looked thin and fairly immature. Two neighbors/hunting buddies and I share pics frequently, and when I called the buck “a 125-inch 2-year old” I got no argument. Then one of those buddies killed a great ten-point three weeks after the bow opener and when we stood over the buck we all realized that it was the same deer…except far heavier and taller than we’d anticipated. That buck grossed a whisker shy of 155”, meaning my original estimate was off by close to 30 inches!

Things can go the other way too, and it happened just last year. One of my target bucks was not so imaginatively named “The Big Ten” because he boasted (you guessed it) 10 tines that arced skyward off sweeping main beams. I had oodles of pics of this buck over a three-year span, and when I shared pics of last year’s images with friends, I had no estimates under 160 inches. One buddy—a B&C measurer who’s taped hundreds of really big whitetails—felt The Big Ten could gross 170 inches if he didn’t break any tines. Well you guessed it. When the buck was killed during late muzzleloader season his gross score was in the high 150s. Even with a library of pics to scan, I’d missed him by close to a foot, and I wasn’t alone.

Lots of factors—usually a combination of them—can make a buck’s antlers look bigger or smaller in pics than they actually are. In my experience, night images are the ripest for scoring errors; flash (including IR and no-glow) really messes with our ability to gauge tine length and antler mass, probably because the combination of light and shadow fools us.

Camera position is another consideration. Cams pointed down will inevitably shrink a buck’s rack, while those slightly lower than the deer can make even a mediocre rack look like a skyscraper. And even when you’ve got the camera positioned perfectly, the buck’s stance can transform a solid ten into a Booner, and vice-versa. Ideally, I’ve got my camera set on multi-shot mode, and I’ll have multiple pics, taken from several angles (and hopefully several encounters) that will paint a clearer picture of true antler size.

Read Next: The Best Cellular Trail Cams for Deer Hunting

Finally, pay close attention to body size; The Big Ten’s rack looked far bigger than he was because he was just not a big-bodied deer, and especially so for the area. This is farm country, where most 5-½-year-old bucks will field dress far above 200 pounds. This buck was 20 pounds below that weight. In hindsight, I knew I was factoring the buck’s age into my estimates and assigning him a typical body weight for his age class. In contrast, we have pics of a buck we call “Bruce” a clean ten-point with what looks like a classic 150-inch rack. But Bruce is not only 7½ years old, he is probably the largest-bodied buck I’ve ever seen in this country, with a bull-like neck and shoulders. I’ve kind of given up estimating his antlers, as any critter of his size and age is a once-in-a-lifetime deer here. That said, it wouldn’t surprise me if that 150-inch rack is much bigger.