How to Hunt Late Season Deer From the Ground

Now is the time of year to climb down from your freezing-cold tree stand and tag a buck from the ground. Here are four great ways to score 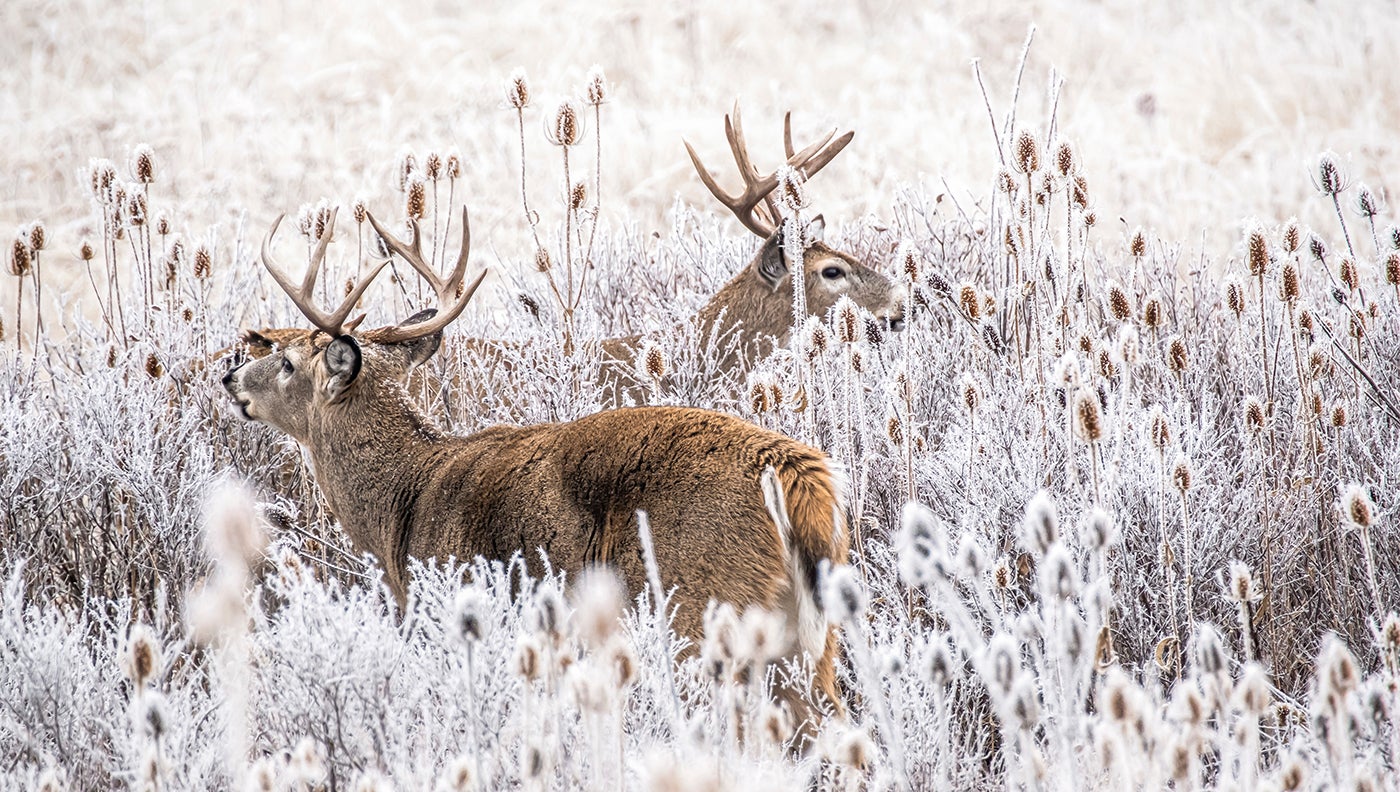 A pair of late-season bucks out feeding during midday. John Hafner Photography
SHARE

I’ve been in enough late-season tree stands to know a few truths about them: they are cold, they seem smaller than they did a month ago, they are a pain to crawl into and out of in winter. But wait, there’s more. Winter stands can be creaky, and slippery. And deer—particularly matriarch does—are so used to looking up by now that the height advantage of a stand is almost negligible. This is especially true if your late-season stand lacks cover, like most do, once the trees are bare. The good news is that you don’t need a tree stand to kill a deer now. In fact, the late season may actually be the best time of the year to go to ground. Here are four proven methods for getting on winter whitetails while keeping your boots on terra firma.

I shot the largest whitetail doe of my bowhunting life at a distance of 8 yards while I was kneeling in the snow, my silhouette hidden by the trunk and branches of an Iowa willow tree. The willow grew at the edge of a DNR food plot on a section of a WMA that took me almost an hour to hike to from the nearest parking lot. When I arrived, it was late enough in the afternoon that I literally had minutes to scout entry trails and decide where and how to set up.

When I spotted the sprawling willow, I ditched my stand in a snowbank, scraped out a hasty trench, and laid down a sweater to kneel on. Twenty minutes later, I looked up to see nine deer moving toward the plot, and I came to full draw as the lead doe stuck her head behind a burr oak. It was five degrees that afternoon, but everything happened so quickly I didn’t have time to get cold.

The beauty of using existing cover for a ground blind is that, in addition to not having to tote in a stand or pop-up blind, is that deer are accustomed to seeing the tree or brush pile or clump of grass you decide to hide in. So your only job is to mind the wind and minimize movement. If you’ve not done a lot of ground hunting, my experience has been that back cover to break up your silhouette is more important than having lots of cover in front of you. And while I rarely use a face covering in a tree stand, I almost always wear one when hunting from the ground. It’s surprising how close you can get to whitetails this way, and the greatest challenge is often moving a gun or drawing a bow at eye-level deer in easy range. Typically your target deer will eventually look away, or go behind an obstruction, or walk far enough past you for you to make your move. The trick is being patient enough to wait for you opportunity.

2. Still-Hunt a Buck, Even With a Bow

Still-hunting might seem a tactic reserved for rifle hunters, but when snow blankets the landscape, it’s actually a perfect time to slip close enough to deer to kill them with a bow or, of course, a muzzleloader. The snow with typically muffle your approach, and it makes deer more visible. Obviously any time you can see deer before they see you, it gives you a chance to plan a careful approach, keeping critical factors like the wind and cover in your favor.

One of my favorite ways to still hunt now is to ghost the downwind edges of security cover, moving very slowly and taking my time to glass into the thick stuff from every new vantage. In the big woods, conifer swamps and clearcuts are perfect places to try. In farm country, I like the edges of logging sites and brushy transition between bedding areas and ag fields. Winter deer frequently take advantage of warmer midday temps and move to feed, and I’ve caught them moving between these areas throughout the day.

You almost can’t go slowly enough. I started still-hunting in my 20s and quickly learned that whenever I thought I was going slowly, it meant I should probably throttle it down even more. I killed my second archery buck this way and didn’t have the advantage of snow; however, the frost had slicked the ground enough that I slipped any time I went too fast , so I was basically stopping every other step to plan my next when I looked up to see the 8-point buck moseying my way. Had I been enjoying my normal pace, I’m sure I’d have bumped that deer. Instead, I sent an arrow through him when he turned broadside to check a scrape at 12 yards.

I spent the first decade of my hunting life driving deer more often than I hunting them from a stand. And now, every once in awhile, when my buddies and I are tired of sitting in frigid stands or confining blinds, we gather to make small pushes during the late archery season. And the same principles I learned in my youth have served us well when we’re trying to get up-close shots at whitetails through forced movement.

One of the keys to getting deer moving at a reasonable pace past standers is to simply not to push them too hard. The most obvious way to pull this off is simply to have the drivers move slowly. Try to push whitetails hard now and they will either speed off and present no shot for posters, or they’ll circle back through the drivers, with the same result. But if you give a deer a little time to recover from the bump, they’ll walk instead of run past your posters. If you’re a driver, shoot for a pace that’s only a tad quicker than still-hunting, and if you bump a deer, stop, kneel, and stay put for a while. This gives a fleeing deer time to slow down and analyze whether the thing that spooked them is in hot pursuit. Once they realize the predator is not right on their tail, deer typically settle down and make a more measured retreat at an easier pace.

Another tactic for slowing down deer for posters is to simply give deer space between getting bumped and reaching the posters. If you’re driving a small timber block in farm country for example, forget posting guys right on the edge of that same block; instead, move them to the cover deer will head for after their initial flight. This might be a grass waterway a quarter-mile off, an abandoned farmstead across the field, or a secondary chunk of timber hundreds of yards away. This cushion not only gives deer time to slow down, but posters also have the advantage of seeing the deer approach from a distance.

Finally, give deer the wind—or at least the illusion of having the wind—as they flee. It’s often thought that the best thing for a poster is to have his scent blowing straight-away from the drive, but this is asking a panicked deer to run with the wind at its back, something whitetails will only do for a short time before either turning back into the drive or squirting out the sides. Far better to drive into a crosswind and set standers up to get shots at deer that are moving into a wind that’s quartering just enough that the deer feel safe but still can’t get your scent.

Obviously the hub-style, pop-up ground blind has revolutionized hunting from the ground in many ways, but it has its limitations, especially in the late season when deer are ultra-wary. For a camo blind to work now, it need to be either left out in the open for a while so deer can get used to it, or it has to be thoroughly brushed in for a surprise hunt. I tend to lean toward the latter approach this time of year, preferring to back a blind a couple rows in to a standing cornfield, or tuck it hard against a brushy fencerow or thicket. Then I’ll adding as much natural cover to break up the silhouette as possible.

Another great option is to use a blind covered in snow camo. I’ve used this approach many times and have often set the blind up without a shred of cover nearby. With the largely-white backdrop of a snow-covered landscape, whitetails have a difficult time nailing the silhouette of a snow blind, and I’ve had some point-blank shots at deer that I’d have never fooled with a normal camo pattern.

One thing I love about snow-camo blinds is that I can set them up virtually anywhere I feel I have the wind in my favor, allowing me to pounce on a confluence of trails in a staging area or even right on the food source itself. Of course these blinds aren’t totally foolproof; you’ll need to mind wind direction, and anytime you can further break up the blind’s outlines by using back cover or at least making sure the top of the blind isn’t silhouetted against the sky, the closer you will get to deer. The number of snow-camo blinds is pretty slim right now, but this model by Thunder Bay Outdoors looks like an item that will be on my Christmas wish list next year. Of course, if you are at all crafty, you can make a snow-camo covering for your existing blind, and instead of waiting for next Christmas, you can get out there and tag a late-season buck from your blind right now.