After slipping into bow range and waiting for six hours, Jordan Phillips was rewarded with a huge nontypical velvet muley 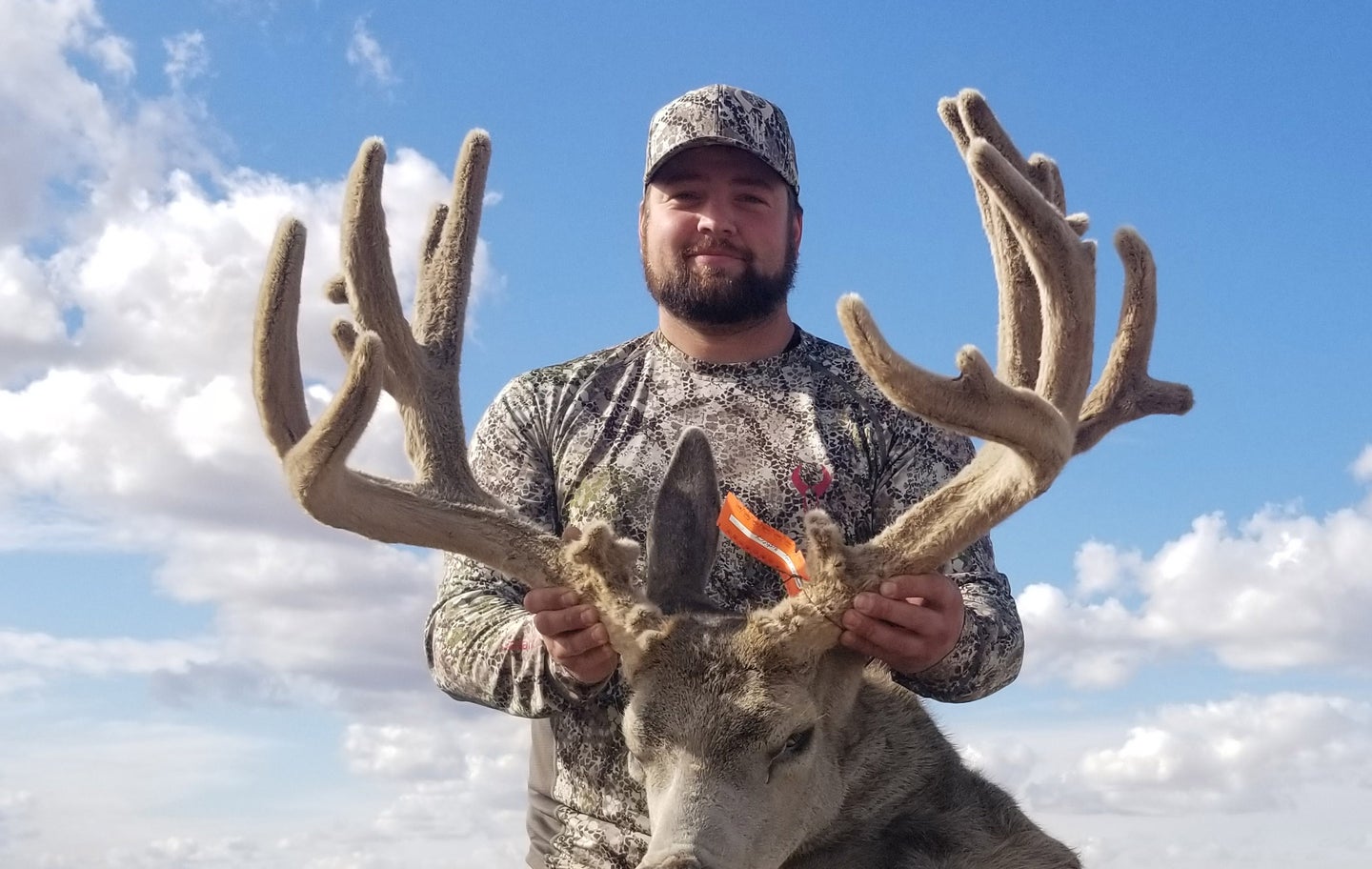 Jordan Phillips is no stranger to big mule deer. As a farmer from Saskatchewan, he lives and hunts in some of North America’s best mule deer habitat. “I actually shot my first big muley on my first hunt,” Phillips says. “I was 15. My friend took me out and it was a push situation; that buck came running right in front of me and I was able to drop him. It scored 242-4/8, and had 72 inches of non-typical points. I was pretty much addicted to mule deer hunting after that hunt.”

As the 2020 season approached, Phillips was out scouting at every chance. “I caught a glimpse of a monster, but unfortunately that was the only time I saw that particular deer,” he recalls. “On opening day I did plenty of glassing but didn’t see anything over 160”. On the second day I was hiking in and spotted some deep-forked antlers in the brush, and after some glassing I realized that I was looking at a 190-plus typical with a 3- to 4-inch” drop tine. Well the stalk was on, but light rain set in and after spotting a smaller companion with him, I just wasn’t able to sneak any closer than 80 yards.”

Phillips returned for the third day, his hopes set on stalking the buck he’d seen the day before. “After some glassing in that area, I finally spotted some tall tines, but something was different—really different. I finally realized that this buck had stickers all over and immediately my heart was racing.” Phillips made a plan to sneak in from downwind, and he finally wiggled into about 60 yards. “But when I got there I noticed a second deer, and I couldn’t believe it, but it was the big typical from the day before. I got a couple yards closer, and the waiting game began.”

As many spot-and-stalk muley hunters learn, the “waiting game” can last for a long time. “After three hours of watching one or both of them stand, feed, then bed back down, without ever giving me a shot, they finally both stood up and walked straight away from me over a hill. My heart sank. I thought they would pull a Houdini over that hill and disappear like they often do.”

But Phillips decided to see if he could relocate the bucks. “Thankfully I found them, only a couple hundred yards away. This time I was able to sneak within 30 yards. But they were bedded, and the waiting game began again.” Three more hours went by, and once again Phillips watched as the deer took turns getting up to feed, but still presenting no shot. “They would lie back down each time and even fall asleep,” he says. Finally the nontypical got up and fed within 24 yards for about a minute—and finally presented Phillips with a good shot. “It’s one I’ll never forget. I saw the arrow hit and the buck went about 20 yards and laid back down, in the very spot he’d spent the last several hours.”

Phillips’ buck grossed 224 and change as a nontypical and was his first velvet muley. While the inside spread of 21-6/8 inches wasn’t huge for a mule deer, everything else was pretty incredible. There were 24 scoreable points and over 30 inches of nontypical inches on the massive rack, in addition to main beams over 26 inches long. “It was an amazing buck, and a hunt I’ll never forget,” Phillips says.

As part of the TV crew for Non-typical Nation, Phillips enjoys sharing his outdoor adventures with others. “We’re just a group of enthusiastic hunters and outdoorsmen who hunt everything we can, in Alberta, Saskatchewan, and Manitoba,” he says. “I think anyone who is a sucker for big nontypicals, like I am, would like the show.”