Ryker Bergo realized he’d forgotten to load his gun just as this giant nontypical was bearing down on him. Here's how he got it done anyway 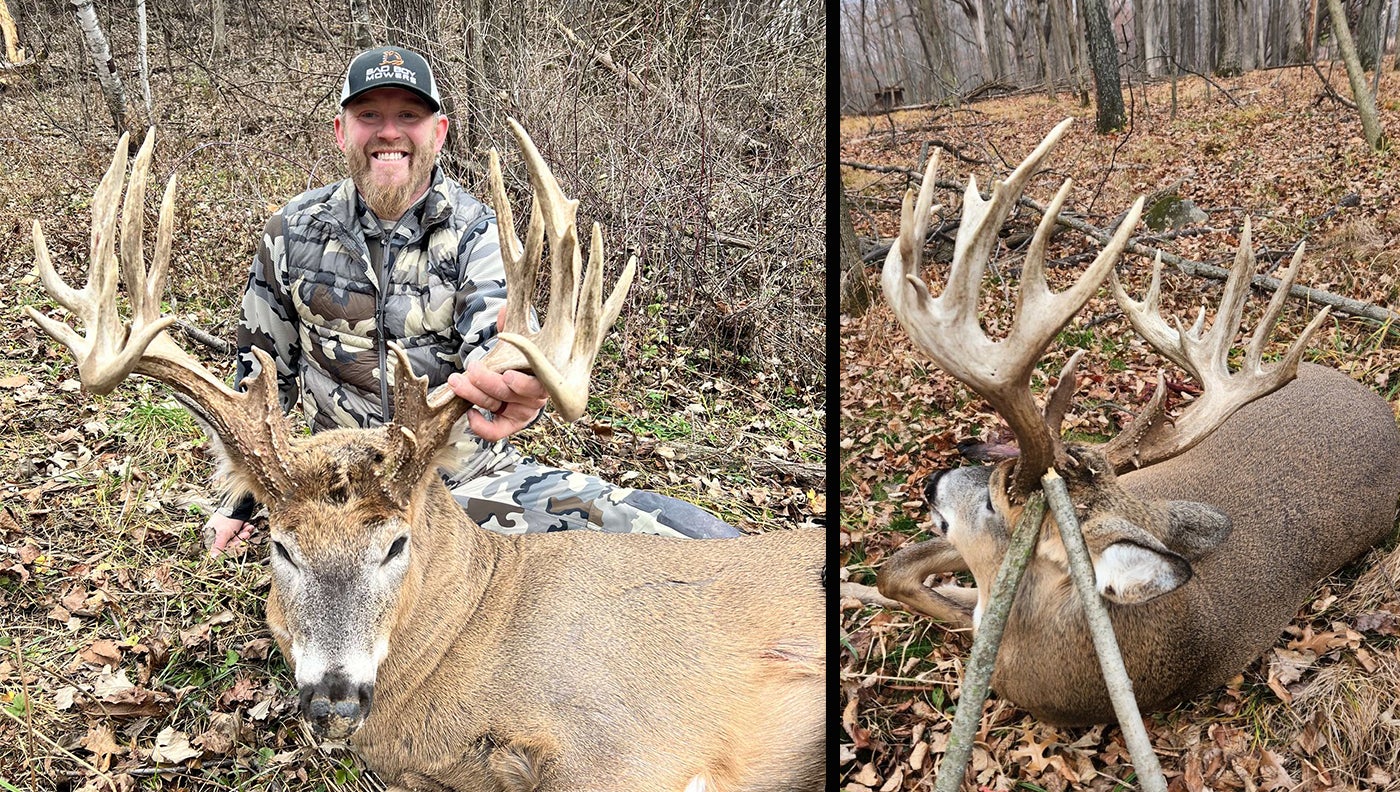 Minnesota whitetail nut Ryker Bergo knew there was a great buck frequenting the farm he owns with his brother. But since the tract is only 40 acres, the hunter also knew he’d have to keep pressure on the buck to a minimum in order to score. Bergo’s plan came together on November 11 when he was able connect on the main-frame 10-point that had enough mass and junk to push it’s B&C score well above the 200-inch mark. But it almost didn’t happen.

First Pics of a Summer Slammer

The Bergo brothers’ initial clue about the buck came this past summer when they got a few trail-cam photos of the deer, but it wasn’t obvious right away how special he was. “Luke and I knew there were three good bucks on the farm, but this one really didn’t look super big, probably because he wasn’t that wide,” Bergo told F&S. “Well, after velvet-shed, we got a better pic of him, and then we knew we were dealing with a really nice buck.”

Bergo, who has tagged several B&C-class bucks, recognized that while hunting the buck aggressively might result in a trophy, it could also bump the buck and make him hesitant to ever visit the small tract again. “The property is mostly a wooded hillside bordering ag land on the top and a broad valley on the bottom,” he said. “My brother and I decided to just hunt the fringes and hope that the buck would make a mistake eventually.”

A Long and Action-Packed Hunt

The early archery season passed, as did the first several days of Minnesota’s firearms season, with no sightings of the buck. Then on November 11, almost a week after the gun opener, Bergo finally laid eyes on the giant. “I’d decided to sit all day,” he said. “I’d been so busy at work that I couldn’t bowhunt much, and I wanted to make up for lost time.” Bergo never had a chance to get bored during his long sit, because through the morning and into the early afternoon, he saw what he guesses were 20 does and four bucks all 120 inches or better.

“Then at 3 p.m., I saw a doe coming toward my stand with a big-bodied deer following. I got just enough of a glimpse of the buck that I was pretty sure it was him.” Bergo, who is a member of the Dirt Road Outdoors TV team, was self-filming the hunt. “I had to make sure the camera was running, and then I glanced down to make sure my gun was ready.” That’s when he realized that he’d never loaded it. “I was sitting there with a huge buck in range, and my gun was empty, and the mag was in my pocket”

Fortunately, the doe in front of him was busy snuffling acorns, and the buck’s head was hidden behind some brush as the Bergo found the full box magazine, slipped it in his 20-gauge, and chambered a round. “The doe got a little goosey and started to wander off a bit, and but the buck just flicked his tail and followed her,” Bergo recalled. “I had about a 50-yard shot and was pretty sure I’d hit him well, but I managed to stop him again and took a quartering-away second shot. Then I saw him stumble pretty hard and finally go down. I gave him 30 minutes just to be sure, then I climbed down to take a look at him.”

Like many hunters, Bergo has experience ground shrinkage before, but just the opposite happened with this buck. “He kept getting bigger as I walked up to him, and when I finally got my hands on him it pretty much blew my mind,” he laughed. Bergo had every right to be awed, as his Minnesota monster sported 23 scorable points and, while not officially scored yet, should gross in the 220s.