Aaron Linhart didn’t even know this huge nontypical was around. But after some neighbors shared the word, he moved in and got it done 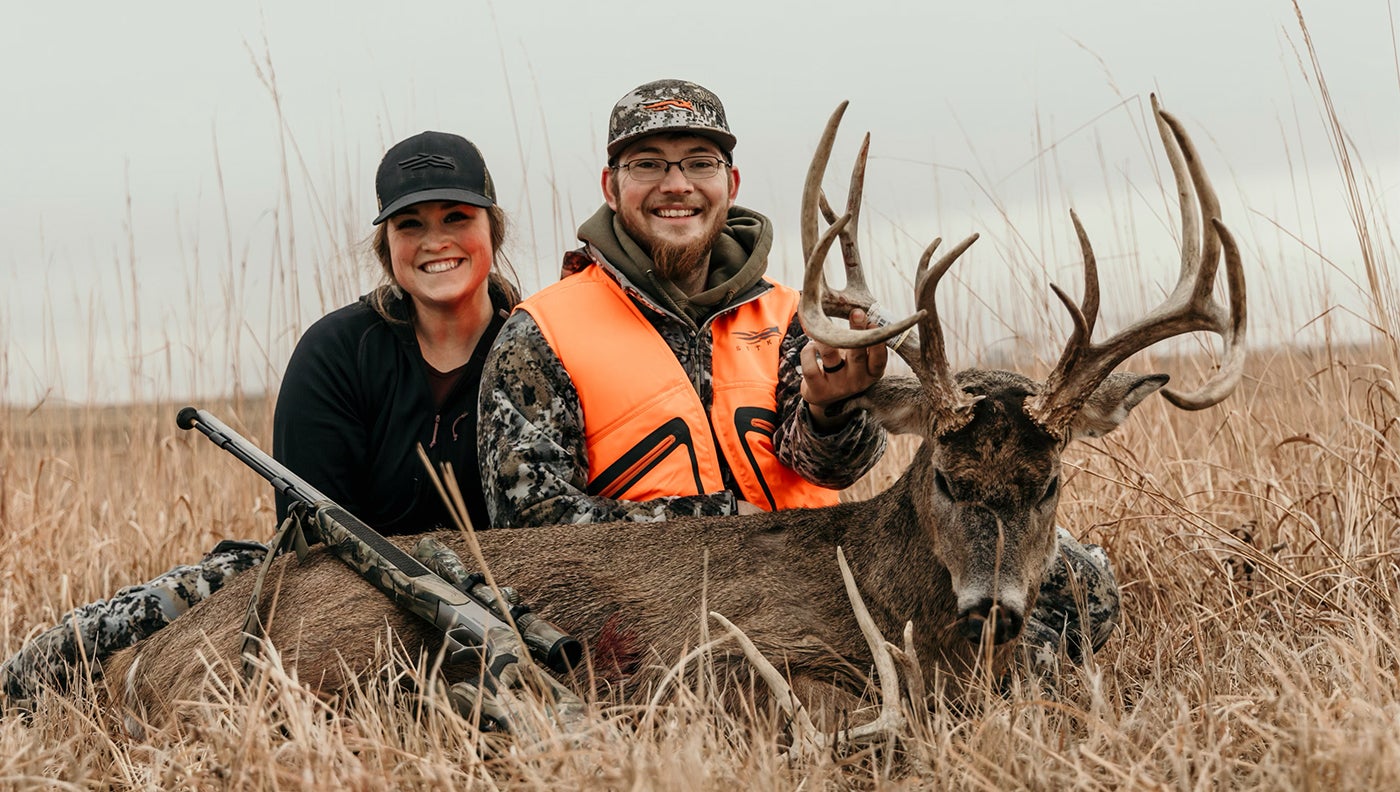 Aaron Linhart and his wife, Sarah, who filmed the hunt, pose with the big Iowa nontypical. Aaron Linhart
SHARE

Aaron Linhart didn’t even know the buck existed—but his neighbors did. Earlier in the fall, some started asking the Southern Iowa native if he was hunting the giant, 6-1/2-year-old nontypical. One neighbor had been following the deer for three years. Linhart told them he’d never even laid eyes on the local legend.

He had access to a property in the area, but it was low on his list of places to hunt. Still, wanting to see what the buzz was all about, he started scouting the property and eventually found the buck. After a good look, he realized he had one of the buck’s sheds from three seasons prior. The other thing he noticed—just as his neighbors had—was that the deer had developed a large puss pocket on its neck, probably to do a serious injury. Everyone worried that the deer wouldn’t survive the winter and hoped someone would put a tag on giant before the season was out.

It almost didn’t happen. It wasn’t until the state’s late muzzleloader season that Linhart caught up with the monster on a CRP farm adjacent to a neighboring clover field across the road. Each evening, between 40 and 50 deer would cross through Linhart’s hunting ground in route to that destination food source. Eventually, the hunter intercepted the big nontypical making the crossing before dark, but Linhart missed the shot when his muzzleloader hang-fired. He spotted the buck again the next day, but the deer wouldn’t come close enough for a shot. He filmed the huge buck for an hour.

Still, he kept after it. On December 30, a third encounter proved to be the charm. Conditions weren’t ideal; it was an unseasonable warm 43 degrees with overcast skies with next to no wind. And Linhart and his wife, Sarah, who was filming, didn’t get to their tree stand until around 3 p.m.  But that didn’t worry the hunter. “We were late, but it’s great access,” Linhart told F&S. “We were down in a ravine where we can’t be seen. All the bedding is up over the hill.”

Once settled in, they started scanning the area. A cattle pasture stretched behind then and CRP sprawled out in front, flanking patches of timber. They didn’t see anything until around 5 p.m. First, two does appeared. Then a 140-inch 8-pointer. Next a little buck. They heard another deer walking inside the cover nearby, but they couldn’t see it—until, suddenly, the small buck’s posture changed, and just 75 yards away, the big nontypical they’d been after stepped out.

Sarah hit the record button on the camera, and Aaron shouldered his muzzleloader, as deer stopped broadside at 80 yards. Linhart settled in, squeezed the trigger—and the gun misfired. The primer sparked, but the powder didn’t burn. As quickly and quietly as he could, he broke the gun open, put another primer in, and got settled in again as the buck looked around. “He’d heard the gun click, but he couldn’t tell what or where we were.”

Linhart asked his wife if she was still on the buck with the camera, and when she answered yes, he pulled the trigger again—and this time the gun went off. The buck mule kicked, ran about 15 yards, and went down in the CRP. “It was over in 10 seconds,” Linhart said.

That’s when everything started to sink in. “It is one of those deer we were really lucky to hunt. We run a pile of cameras, but never run them on that farm. Once the neighbors started talking about him, we started hunting. Our neighbors are awesome people and are on the same wavelength as us when managing big deer. There were at least five different people hunting the buck that afternoon. He was well known. I was just lucky enough to be the one on the muzzleloader.” Linhart rough-scored the buck at 197-3/8.

“The landowner who let us hunt came down,” Linhart said. “The recovery was great. All the guys who were hunting to the north came over, too. It felt like deer camp. It was a neat experience having everyone there. That was the most memorable part of the whole deal.”