Devyn Messenger home-schools four kids yet still somehow found the time and determination to scout, hunt, and finally tag the buck of a lifetime on public land 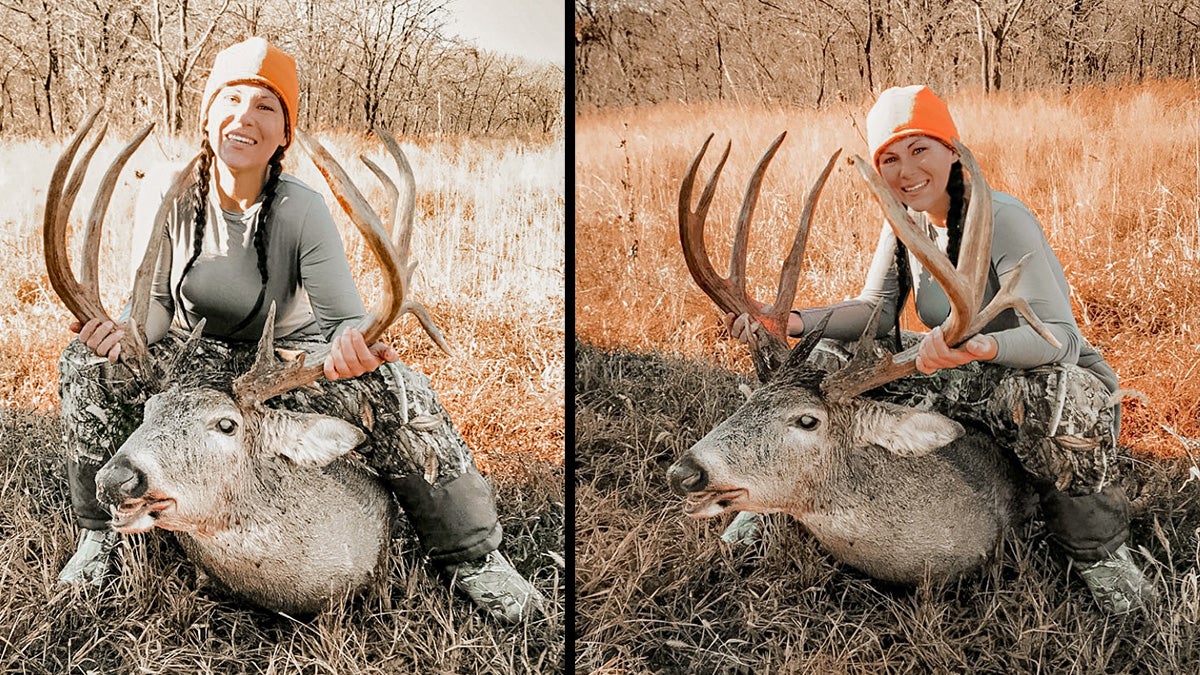 The deer is one of the biggest ever taken at the Fort Riley Army Base. Devyn Messenger
SHARE

With her first-ever deer, Devyn Messenger tagged the buck of a lifetime. And on heavily pressured public land too. On November 5, while hunting with her husband at Fort Riley, Messenger rattled in a 200-plus-inch monster to 25 yards before taking the buck with her crossbow.

Messenger grew up in a hunting family in Louisiana, but only the men in her family hunted. It was only recently that Messenger began hunting with her husband, Matthew Messenger, who’s an avid outdoorsman and an active-duty member of the Army. “My very first deer season was last year at Fort Bragg in North Carolina. It was so hard. I did not have any luck,” Messenger tells F&S. “This February, we got stationed in Kansas at Fort Riley. I immediately got into the woods with my camera and trail cams and began photographing the elk and deer. In my brain, a big deer was an 8-pointer. Well, Kansas has a whole other breed of deer. They’re just insane. I was dead set on hunting one.”

Messenger put in a lot of effort scouting public-hunting areas at the base, and she sought as much hunting advice as she could find. “I was one of those annoying people on the forums online asking all of the questions about stuff that you’re already supposed to know,” she says. “I talked to everybody and listened for advice on everything from wind to scent to tree-stand heights—everything. I took in every bit of information I could.”

This fall, when deer season rolled around, she put her newfound knowledge to use. Bow season opened on September 12, and Messenger has been in the woods twice a day five to six days a week since then. With her husband gone for training, some days Messenger would bring one of her kids, whom she homeschools, to sit in the tree stand with her. On other days, she’d put all four of her kids in a ground blind near her. Even though her kids inevitably made some noise, Messenger got into deer in September and October, but by November, she still hadn’t taken a buck. “It never aligned just right. I passed on a lot of smaller bucks,” she said. “On one camera, I had two target bucks I was holding out for. One was a big, gnarly 9-pointer. The other was a big 13-pointer.”

The Hunt Comes Together in November

On November 4, one of her target bucks ran to within 25 yards of her tree stand but didn’t give her a shot opportunity. On the 5th, she returned to the woods with her husband, who had recently returned home from training. He’d already gotten his deer this year. The morning was silent, and they didn’t see deer moving when they normally did. “I decided to rattle and then get quiet and see what we could pull in. We rattled for 30 seconds and then hung the rattling antlers up,” Messenger says. “The buck ran in from a patch of woods in front of us and hit every tree branch on the way to me. He was just ready to fight. He came right in to about 25 yards and stopped with a grunt in a perfect clearing.”

The buck turned broadside and was slightly quartering to Messenger. She released a bolt tipped with a Wasp Jak X Mechanical Broadhead with her Barnett Whitetail Hunter II Crossbow. She made a nice hit on the deer before she and her husband followed a heavy blood trail for 100 yards. “I was completely calm and put together until after I shot,” she says. “Then the buck fever definitely hit. I had a hard time climbing down from the tree stand because I was shaking. That got even worse when we got up to the deer and saw how big it really was.”

She soon realized the deer wasn’t one of her target bucks as she thought. “We got him all the way back to the road after field-dressing him before I realized it wasn’t the deer with the split ear I initially thought he was,” she says. “We picked the rack up to get a video of the antlers, and it was just insane. That’s when it really hit me.”

The deer had 18 total points and 16 scoreable points. Derek Moon from the Fort Riley Environmental Office green scored the deer. The rack boasts a massive 17-inch G2 on the right side. The deer was scored as a nontypical and green grossed 218 5/8 inches and netted 203 7/8. Messenger plans to get it officially scored following the mandatory drying period. “I honestly knew nothing about scoring,” she says. “I didn’t know what Pope and Young was. I didn’t know what Boone & Crockett was. And I’m so glad I didn’t. I think I would’ve been more nervous. I really didn’t fully realize what he was.”

The whitetail deer will go down as one of the biggest ever taken at Fort Riley and one of the biggest bucks taken this year in North America. Messenger says that tagging it on public land makes it even sweeter. “It adds to the pride of it. When you get something on public land, you’ve got to work for it,” she explains. “I put in hours and hours of photographing the woods and being out there and scouting—figuring out which water sources the deer were using and where they were bedding. We were out there for seven solid months to find something we could be proud to put on the wall.”

Messenger plans to get a shoulder mount of her buck. The very next weekend, Messenger says her 12-year-old daughter followed in her footsteps and killed her own first deer—an impressive 10-point typical. After taking such a big buck with her first-ever deer, Messenger is already thinking about next year. “We just left the woods yesterday from scouting,” she says. “Obviously, I’m not going to even try to get a bigger deer. I’m just going for something unique now. I want gnarly and pretty or wild—the more kickers and stickers the better.”