The full story of how Derek Settle put it all together to take this buck of a lifetime on a D.I.Y. solo hunt on his property 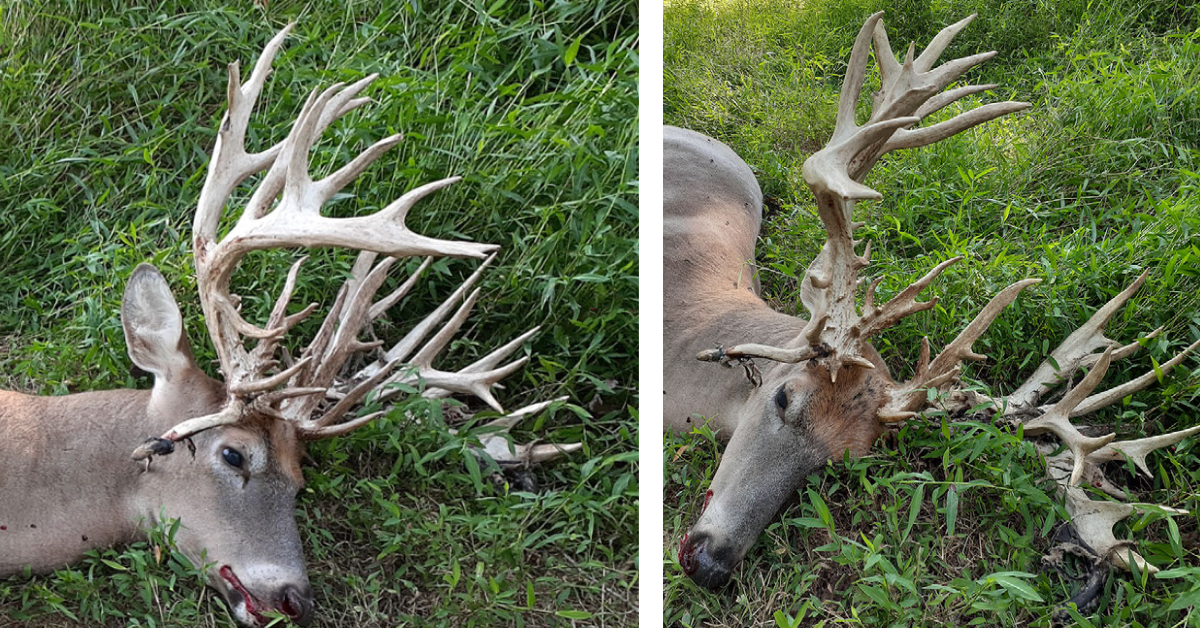 EDITOR’S NOTE: When the photos of this deer were first sent to us by the hunter, Derek Settle, our immediate gut check was: This is a high-fence deer. Before we interviewed Settle, we confirmed with Kentucky Fish and Wildlife that the buck had been checked in as being killed and tagged in Kentucky on telecheck. (High fence deer in Kentucky do not have to be checked in.) After our interview with Settle, we were confident that his story was true. However, after now reading Facebook comments and seeing photos of his deer that were posted on the page of an Indiana deer preserve, one thing is clear: Someone is not telling the truth. We are investigating this story and will continue to publish updates as we learn more.

Derek Settle solo hunted a monster buck that’s sure to make the record books and is quite possibly the biggest buck ever taken in Kentucky—a state that is known for its booners. Settle says the impressive whitetail has at least 57 scorable points and rough-scored it at 289 5/8 inches B&C. The rack is still in the drying phase before it can be officially scored B&C. Settle was able to get an official SCI Green Score on the incredible buck, which came in at a whopping 311 2/8 inches.

“When I saw him on the ground, I’ve never really acted like that in my adult life,” says Settle. “I didn’t even know how to act. I was just elated with joy. I hadn’t really realized what I’d done because the hunt was so intense. His rack was just the icing on the cake…it’ll never happen again to me.”

Settle, 41, grew up in the Bluegrass State and is a long-time local of Henderson County. He’s a union carpenter and lived a couple of miles from his current property. He did some landscaping for the woman who lived on the plot. After she passed away, he quickly picked up the 5-acre lot and moved his family into a two-story log home on the property. That was four years ago.

“I could tell that a lot of deer were running through here,” he says, noting that the neighbors also allow him to hunt their adjoining land. “It’s a natural corridor. They use the clearing to get back and forth between the ag-fields and the hardwoods.”

Settle got to work setting up mineral and food plots and installing several permanent stands. The property hunted well—really well. He shot nice bucks each of the past three seasons, including a nice 13-pointer last year. His sons took some good deer as well. But nothing prepared Settle for the buck he started getting trail cam pictures of in July 2020 at one of his mineral plots. “He just popped up out of nowhere,” Settle says. “I’d never seen anything like him before. He was still in early velvet, but I could just tell he had a lot going on under all that fuzz.”

The deer returned to the mineral plot at different parts of the day for nearly six weeks. Then, on August 28, 2020, weeks before the archery season opened, the buck visited Settle’s property for the last time in a long while. “He just disappeared,” Settle says. “I figured he took off. I was hoping I’d maybe see him again. I just kind of put him in the back of my mind. I never told a soul about him. I never showed the trail cam pictures to anybody… I knew what he was.”

A Spot-and-Stalk Hunt on the Deer of a Lifetime

Settle recently set up an elevated ground blind on the corner of his property closest to his house. When the wind is blowing toward his home, he knows that it’s a good time to hunt from the blind—like it was on Saturday, September 11, 2021, when Settle decided to go hunting around 2:30 p.m. Right after he got into the blind, he saw something that “stirred [his] curiosity.”

“I was getting situated,” he says. “I took my backpack off, got a drink of Coke, and just settled in. I looked around a little bit and something caught my eye. About 300 yards away, in the corner of a soybean field south of me, the light shined on his rack right when I was looking that way. I thought, That’s not a rack. I want that to be a rack but must be brush or a pile of sticks, or something.”

Settle got out his Bushnell Powerview 7-15×25 binoculars for a better look. He decided it was worth checking out and that he still had plenty of time for a stalk. He left everything in the blind except for his crossbow, a brand-new Raven R26, and one arrow. (Settle has a medical exemption to use a crossbow during archery season because of a herniated disk in his neck.)

“It took me a long time to get over to the deer,” he says. “I was going really slowly. I would only move when it got windy. I stopped a bunch to try to check him out and calm myself down. You know, I was getting excited. I knew that if I would get the opportunity, I didn’t want to be all out of breath and shaky.”

He stopped for a longer break around 55 yards from the buck. At that point, he could tell it was a good deer. He thought it probably had a 14 or 16 point rack. “It got real intense from 50 to 12 yards,” he says. “There was a wild sapling pushed right up against the trees on the weed line. I used that to stay in the buck’s blind spot. I came in on his left rear flank.”

The buck was bedded down. He pulled out his phone to try to take a quick video of the deer, but then a squirrel started barking at him.

“That got that buck’s attention,” recalls Settle. “He turned his head in my direction and turned it back straight. Then he started pulling those long legs out from under him to stand up. I dropped the phone and steadied my bow. When he stood up, he had nothing but his rump facing me. He was looking over his back at me. I had no shot whatsoever.”

Then, the buck started to turn. Settle steadied the bow. He says it was one of the most intense moments of his life.

“Everything in my body at that moment wanted to give up,” he says. “I was telling myself, ‘It’s OK. Nobody would blame you to give up right now and not try to shoot because of how crazy this deer is. No one would believe me anyway.’ I felt the dread of thinking it’s never going to work out again. I mean, these guys are so tricky and sneaky.”

But the buck took a full step to the right. It was broadside and slightly quartering away from Settle. He took the shot.

A Deer Dedicated to Dad

Settle immediately felt confident about his shot placement. He went to the point of impact and found bright red, bubbly blood. Then he retrieved his gear from the blind returned home to pick up his 16- and 18-year-old boys, who Settle calls his “little tracking dogs.” They went back to look for the buck. It had run about 70 yards from where it was shot before it hit the dirt. They loaded it up on a small ATV and brought it home.

Though Settle didn’t post the buck on social media, he immediately sent the photos of his trophy to his stepdad.

“He taught me all the rights and wrongs, do’s and don’ts, and how to be safe in the field,” Settle says. “We spent a lot of time out in the woods together growing up. I owe a lot of this to him.”

Settle’s biological father, Terry, passed away earlier this year. He was a disabled veteran who served the country in the Army and was commended by Kentucky Senator Robert Mills for making “many lasting contributions to his friends, family, community, and nation before his passing on March 25, 2021.” Terry was never able to join Settle in the field when he was alive because of his disability. But Settle says he felt his presence this September.

“I felt like my dad was with me like an angel on my shoulder,” he says. “I was bringing him along for the ride. I’d like to dedicate this deer to him and his memory.

“Bowhunting is just one of those things that I used to love when I was growing up,” Settle adds. “I kind of got out of it for a while because I went to college and lived in the city, but I made it back out into the country and got back into it. It’s like living out a dream from when I was little.”