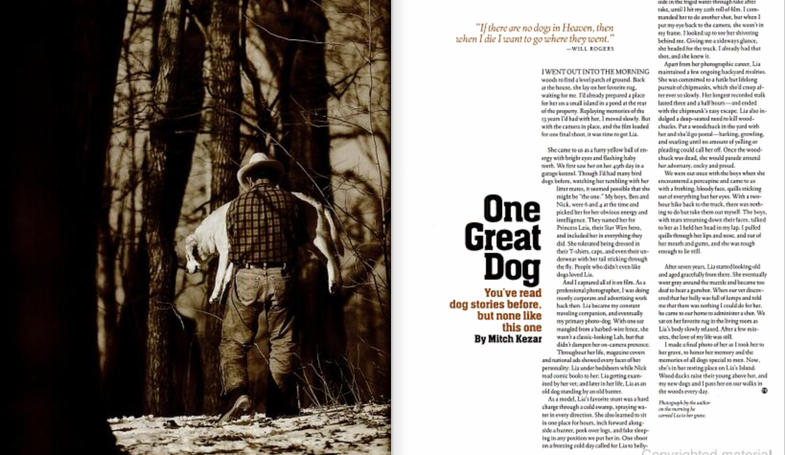 "One Great Dog" was first published in May 2004. Field & Stream
SHARE

I went out into the morning woods to find a level patch of ground. Back at the house, she lay on her favorite rug, waiting for me. I’d already prepared a place for her on a small island in a pond at the rear of the property. Replaying memories of the 13 years I’d had with her, I moved slowly. But with the camera in place, and the film loaded for one final shoot, it was time to get Lia.

She came to us as a furry yellow ball of energy with bright eyes and flashing baby teeth. We first saw her on her 49th day in a garage kennel. Though I’d had many bird dogs before, watching her tumbling with her litter mates, it seemed possible that she might be “the one.” My boys, Ben and Nick, were 6 and 4 at the time and picked her for her obvious energy and intelligence. They named her for Princess Leia, their Star Wars hero, and included her in everything they did. She tolerated being dressed in their T-shirts, caps, and even their underwear with her tail sticking through the fly. People who didn’t even like dogs loved Lia.

And I captured all of it on film. As a professional photographer, I was doing mostly corporate and advertising work back then. Lia became my constant traveling companion, and eventually my primary photo dog. With one ear mangled from a barbed-wire fence, she wasn’t a classic-looking Lab, but that didn’t dampen her on-camera presence. Throughout her life, magazine covers and national ads showed every facet of her personality: Lia under bedsheets while Nick read comic books to her; Lia getting examined by her vet; and later in her life, Lia as an old dog standing by an old hunter.

As a model, Lia’s favorite stunt was a hard charge through a cold swamp, spraying water in every direction. She also learned to sit in one place for hours, inch forward alongside a hunter, peek over logs, and fake sleeping in any position we put her in. One shoot on a freezing cold day called for Lia to belly-crawl through an icy marsh. She hunkered down next to my model and kept her underside in the frigid water through take after take, until I hit my 20th roll of film. I commanded her to do another shot, but when I put my eye back to the camera, she wasn’t in my frame. I looked up to see her shivering behind me. Giving me a sideways glance, she headed for the truck. I already had that shot, and she knew it.

Apart from her photographic career, Lia maintained a few ongoing backyard rivalries. She was committed to a futile but lifelong pursuit of chipmunks, which she’d creep after ever so slowly. Her longest recorded stalk lasted three and a half hours-and ended with the chipmunk’s easy escape. Lia also indulged a deep-seated need to kill woodchucks. Put a woodchuck in the yard with her and she’d go postal—barking, growling, and snarling until no amount of yelling or pleading could call her off. Once the woodchuck was dead, she would parade around her adversary, cocky and proud.

We were out once with the boys when she encountered a porcupine and came to us with a frothing, bloody face, quills sticking out of everything but her eyes. With a two-hour hike back to the truck, there was nothing to do but take them out myself. The boys, with tears streaming down their faces, talked to her as I held her head in my lap. I pulled quills through her lips and nose, and out of her mouth and gums, and she was tough enough to lie still.

After seven years, Lia started looking old and aged gracefully from there. She eventually went gray around the muzzle and became too deaf to hear a gunshot. When our vet discovered that her belly was full of lumps and told me that there was nothing I could do for her, he came to our home to administer a shoot. We sat on her favorite rug in the living room as Lia’s body slowly relaxed. After a few minutes, the love of my life was still.

I made a final photo of her as I took her to her grave, to honor her memory and the memories of all dogs special to men. Now, she’s in her resting place on Lia’s Island. Wood ducks raise their young above her, and my new dogs and I pass her on our walks in the woods every day.