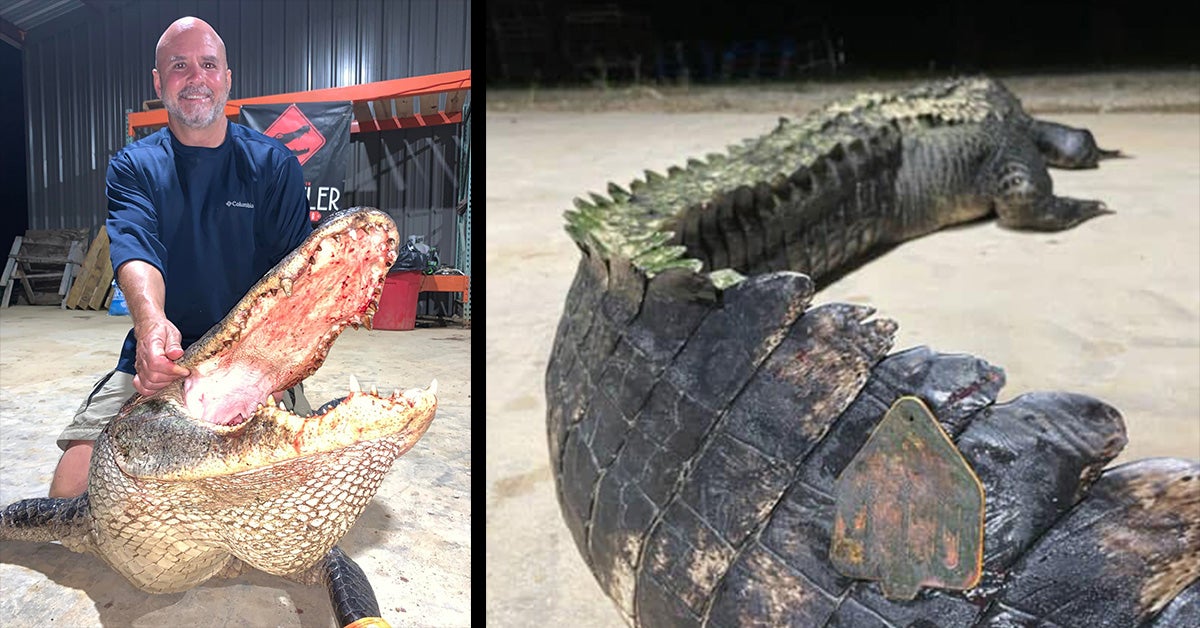 On August 28, Jim and Richie Denson, of Madison, Mississippi killed a state record alligator. They were alligator hunting on the Pearl River, approximately 5 miles north of Ross Barnett Reservoir, according to a Mississippi Department of Wildlife, Fisheries, and Parks (MDFWP) press release.

“My brother Richie and I were able to put a local legend in the boat,” Jim Denson wrote in a Facebook post. “She broke a heavy fishing rod and the snare pole, but we finally got her in the boat.”

The big alligator was already known to the MDFWP. The gator, which the agency dubbed “Yellow 410,” had been captured, tagged, and released years before. “We tagged this alligator on June 11, 2009, as part of a research project,” said MDWFP Alligator Program Coordinator Ricky Flynt. “At that time, the alligator also measured exactly 10 feet 2 inches and was captured within 100 yards of where the Densons killed [it].”

The MDWFP research project’s purpose was to get biological measurements and location data on gators so they can learn more about movement patterns and growth rates when the tagged gators are recaptured or killed by hunters. At the time of harvest, the Densons’ gator was 10 feet, 2 inches long—exactly the same length as in 2009. It is the Mississippi state record female gator and tied the previous record for the world’s longest free-ranging wild female alligator, which was measured in Florida in 1984. That record was broken in 2021 by a 10-foot, 6.75-inch female gator that was captured in Florida.

Female alligators have slower growth rates than male alligators, which can grow to over 11 feet long. In contrast, the average female gator is only 8 feet long, according to Smithsonian’s National Zoo. “Given that knowledge and what we have learned from tagged alligators in the wild, it is entirely possible that this record alligator could easily be as much as 75-100 years old,” said Flynt. “This is definitely a world-class alligator specimen.”