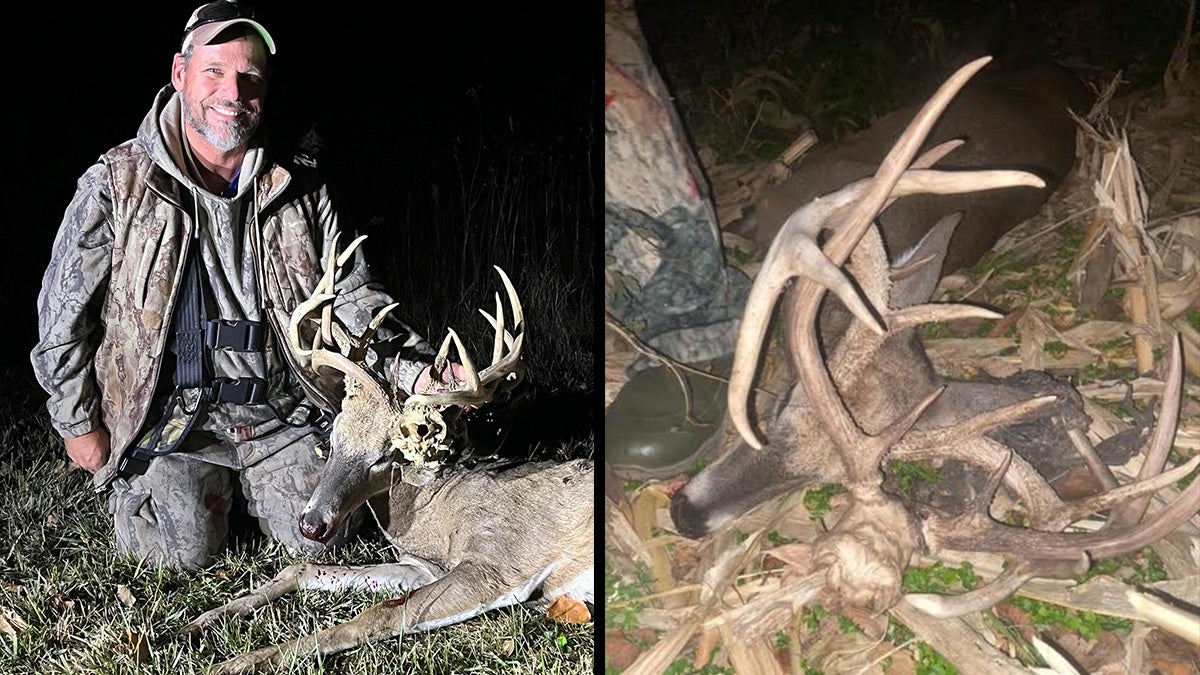 When Missouri resident Mike Lewis first saw a trail-cam picture of this buck, he says it “looked like he had a piece of black fabric or plastic stuck in his rack.” The truth, it turns out, is far more interesting. The buck had the entire rack and skull of another deer lodged in its antlers. Here’s how the hunt went down.

“The first time I really got to sit in the tree stand was this weekend,” Lewis says. He bowhunted his 170-acre property in the northwest corner of The Show-Me State with his son. On the morning of Saturday, October 29, he saw some decent deer movement, but the hunting was slow on Saturday afternoon and Sunday morning. On Sunday afternoon, Lewis’s son wanted to switch stands. Lewis decided to hunt his son’s usual stand—and it turned out to be a fortuitous decision.

Related: The Biggest B&C Nontypical Bucks from Every State

“With about 20 minutes of shooting light left, a doe was out in the field to my right and the buck was following her. They were about 70 yards away,” he says. “When I saw him, I thought he was just a nontypical with a lot of points on his head, and obviously, I decided I’d shoot him if he got into range. But I didn’t know what it really was.

“The doe turned and was coming right into the timber on the trail I wanted her to. Once she got into the timber, I think she winded me. She stood there for about 2 minutes then turned and ran back out into the field. I thought Well, this is over,” he says. “But he didn’t follow her out into the field. He walked right down the same trail and checked the scrape there. He got to within 15 yards of me before I realized that he had another deer’s skull stuck in his antlers. At 10 yards, I was already at full draw, and the rest is history. I shot him, and he didn’t run 20 yards.”

With the buck on the ground, the reality of what Lewis had shot hit him. He tagged his buck and then contacted the Missouri Department of Conservation and was granted a wildlife disposition permit to legally possess the extra deer skull and antlers. “I think he got locked up with the other buck early in the season. Obviously, one of them died. So, this buck went through a lot. I just can’t imagine everything he went through to make it from that point to now,” Lewis says. “I’m 52 years old. I’ve hunted since I was 12. I’ve never seen anything like that. After I shot him, I was a little bit in disbelief and kind of dumbfounded.”

Lewis says the antlers remain stuck together. He’s able to rattle them but not pry them apart. If you pick up the deadhead, you’re able to pick up the other deer’s head along with it. He estimates both of the bucks’ antlers score around 120 to 125 inches. “I would say this is a once-in-a-lifetime thing. You can almost equate it to a 250-inch deer because you just don’t see those kinds of things. It’s pretty unique,” says Lewis. “It’s an indescribable feeling shooting a deer like this. God’s blessed me with health that I can still hunt and fish. I just feel blessed.”