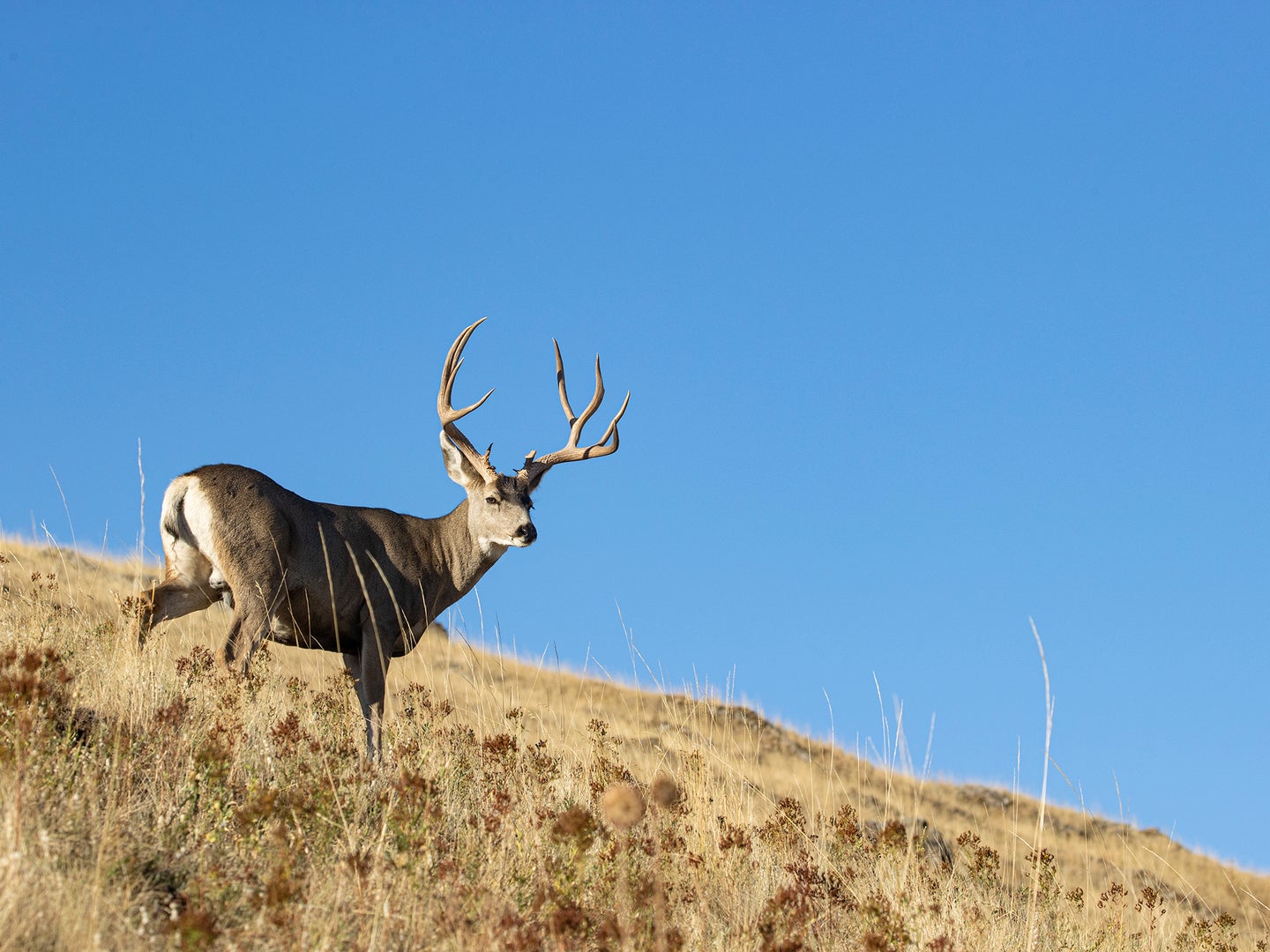 Mule Deer Hunting Isn’t So Easy After All

One gimme hunt led the author to believe that mule deer hunting is a piece of cake. Then he learned the truth

I’VE GOT a shoulder mount of a fine 4×4 mule deer buck on my wall, and if I look at him from just the right angle, I’ll swear that he’s wearing a slight smirk.

Shooting that buck was like backlashing your first cast of the day but catching a 10-pound bass nonetheless, or peaking in high school. It was the first time I ever hunted with outfitter Miles Fedinec of FMF Outdoors, my first time hunting mule deer, and, in fact, one of my first times going out West. I’d never even seen a good mule deer buck before.

Miles had put up a ground blind on the edge of an alfalfa field where he’d been watching that deer feed every day for a month. A young guide trying to make a name for himself, Miles had invited me to Colorado to hunt on the condition that I write a story about it. I wasn’t sure I even liked the guy at the time, and I was positive he didn’t like me.

Still, Miles had done his part. The buck ambled to within 25 yards, and I shot him through the heart with my bow. I then looked at Miles, declared that “mule deer hunting is easy,” and tipped him 30 dollars.

I returned home from that hunt full of piss and vinegar. My wife got pregnant immediately, and we brought our firstborn home right around the same time we welcomed my mule deer shoulder mount. One day, as I was scrubbing baby shit out of a couch cushion, Michelle looked at the mule deer mount and said, “I swear that thing is smirking at you.”

I had to pay a lot of dues before killing another mule deer. I wrote so many stories about Miles that the editor-in-chief of Field & Stream put a moratorium on mentioning him in the magazine. The ban was eventually lifted after Miles pulled him aside at the SHOT Show, got him good and liquored up, and then pointed to me and said, “Look, I’m about the only one who can stand to hunt with the son of a bitch. If you want him to tell stories, it has to be this way.”

I’d gone back to Colorado almost every year to hunt antelope or elk, but it wasn’t until recently that I hunted mule deer again. Miles called to tell me he had a line on a leftover archery deer tag. There were a lot of nice bucks running around, and he suspected I’d have a good time chasing them in early September, when they were still in bachelor groups. So I bought the tag.

I missed two bucks, both longer shots than I should’ve taken, and screwed up half a dozen other stalks. It wasn’t too tough to get within 75 yards of a bedded muley, but I can’t kill from there with a bow. Much closer than that and the critters would jump to their feet, as if triggered by an electric current to their short hairs. Then they’d stot away and stop at 150 yards to look back and smirk.

On the last morning of that hunt, I maneuvered around a group of four bucks, including one bruiser, that was meandering toward a fence gap. I got between them and the gap and drew my bow as the big buck’s antlers swayed into view. I was sitting on my knees in the brush, and the buck picked me out instantly, maybe a half second before I settled into my anchor point. He was just 25 yards away when he saw me. He broke into a full-on gallop and didn’t stop for 200 yards. I went home without a buck.

Last fall, I cashed in some preference points on a muzzleloader tag and returned with an open-sighted CVA and plans on being picky. Problem was, there were only about a third of the deer in the area that I’d seen in the past. I blew a 130-yard shot on a nice 5×5 the third evening. The following day, I crept to within 50 yards of two nice bedded bucks. I was proud of that stalk, and as the deer stood up, I shouldered my gun and cocked the hammer.

Turned broadside, the bigger of the two bucks stared at me as the primer popped with a hiss, but the gun didn’t fire—it was one of the few times in my life I’ve ever had a muzzleloader misfire in the field. On the last morning, I spotted another good buck a few ridges over and figured he was as good as mine as I sneaked into position. I could see his forks poking above a rise 70 yards away and knew he was feeding right to an open flat not 50 yards from me.

But then the forks disappeared, and I didn’t see the buck again. Thirty minutes later, I craned my neck up for a peek, only to see a bowhunter glassing back at me from exactly where the buck had been. The guy threw his hands up and left, probably figuring I’d messed up his hunt. Again, I went home without a buck.

I did finally kill a good mule deer, when my friends at Browning took me on a hunt in Nebraska. There in the Sandhills, my guide and I kicked a giant buck up out of a thicket, and I plowed the deer over at about 25 yards with a 6.8 Western. “Man, talk about lucky, stumbling into that buck right there,” my guide said. “I’ve never seen that deer before.”

I sent Miles a picture and eventually called to tell him the story. I sure didn’t describe it as a difficult hunt, but I thought of that shoulder mount back home, the smirking, and all the years in between. I didn’t say another word about mule deer being easy, either.