Scored by Buckmasters, it's the second 200-plus inch whitetail that Randy Kukral has killed since the start of the 2021 season 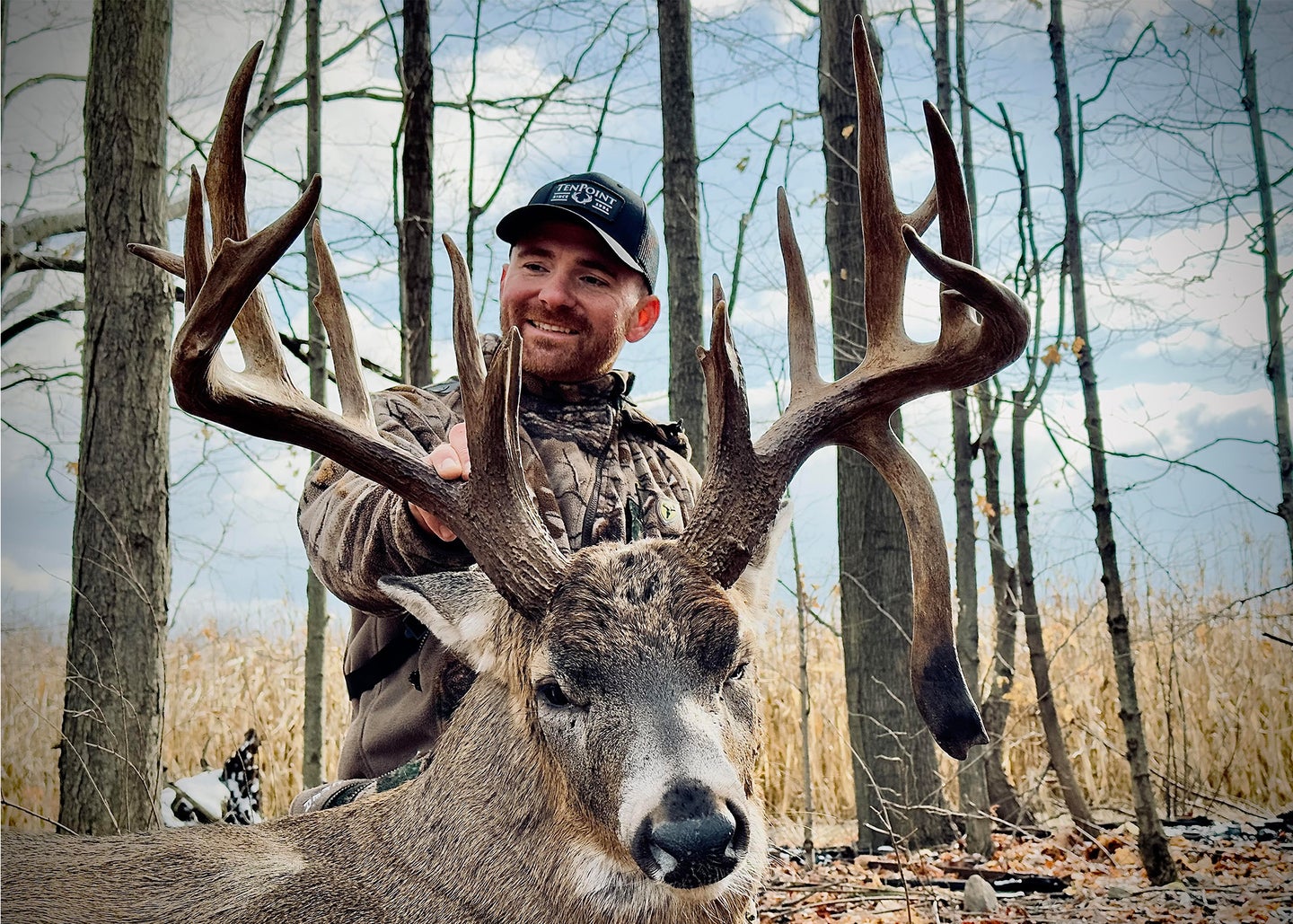 Kukral's northeast Ohio giant sported 9 points on its right side and 11 points on the left beam. Randall Kukral
SHARE

On November 16, 2022, Ohio hunter Randy Kukral put an arrow through an unbelievable nontypical whitetail he’d been chasing for over a year. Kukral was well into his 16th sit this season in pursuit of the 5 ½-year-old Buckeye State brute when the buck slowly worked its way to 25. He shot it through the vitals with his 10Point crossbow and had a short tracking job before recovering his biggest buck to date.

Kukral hunts private land in a heavily-pressured part of northeastern Ohio where he’s obtained permission by developing friendships with local landowners. He first spotted the deer during the heat of last year’s rut but says he was already tagged out at the time. “November 29, 2021 at 4 o’clock in the afternoon is where it all started with him,” Kukral tells Field & Stream. “I see this doe working a ridge while I’m driving down the road. Then I see a giant, giant deer standing right behind her down in a creek bottom.”

Kukral managed to capture cell-phone footage of his very first encounter with the deer. He says what really stood out was the massive drop tine plunging off the right side of its rack. “He walks up this hill and this rack is just wide and huge, with a perfect frame, splits, and a 10 to 12 inch drop coming off,” says Kukral. “I’m immediately thinking: This is my target deer for next year.”

The season ended shortly after that encounter, and Kukral—who works the professional bass fishing circuit when he’s not deer hunting—never had time to get out and scout or hunt for sheds. “When September rolled around, I did a few drive-bys around what I hoped was still his core area, but I didn’t see anything crazy mature,” says Kukral. “I ended up going in there at the beginning of October and started asking for permission.”

One landowner seemed receptive but never returned Kukral’s calls after their first encounter. Luckily, a chance run-in with one of the man’s neighbors yielded success. “I pulled into his driveway to tell him that I might be hunting an area nearby, and he says, ‘Why don’t you just hunt here?’” recalls Kukral, with a laugh. “I put a cell camera up on the creek bottom and within three hours I had a 180-inch buck texted to my phone.”

It was a hell of a deer but not the one that Kukral was after. The drop-tine buck first showed up on one of his cell cams on November 13, and on the afternoon of November 16, Kukral was in a tree stand hoping to meet up with him. “About 3 o’clock, I’m hunting that same piece of property, and I see nothing but giant antlers moving back and forth,” he says. “The antlers almost looked golden with all the moisture they had on them. I knew it was him immediately.”

Kukral watched the deer for an excruciating 20 minutes before it started to close into crossbow range. At 45 yards, a potential shot opportunity emerged, but it wasn’t ideal, so Kukral passed. “Then I bleated at him with a can call twice, and he acted like he didn’t even hear it,” he says. “So I hit him with a couple of tending grunts, and he started coming in on a string.” Kukral took the shot when the deer was inside 25 yards.

“He ran about 70 yards and then just stopped and started walking,” says Kukral. “I don’t know if he even knew what hit him. Then he disappeared into the thick stuff, and I couldn’t see him at all.” Thirty minutes later, Kukral inched out of his stand and got to the top of a ridge with a better vantage point of the area where he’d last seen the buck. He glassed the spot but never saw an inch of the deer’s rack or hide. He started to second guess the shot, but when he texted a picture of his arrow to some friends, they all said the same thing: “That deer is dead.”

Just to be on the safe side, Kukral waited another two hours, but then walked into the thicket and put his hands on the deer’s massive 20-point rack for the first time. “Getting him felt even better than getting my first 200-inch whitetail last year,” he says. “I can’t really put it into words.” With the target deer down and officially scored, Kukral is already setting his sights on 2023. “I’m trying to go three for three,” he says. “I’ve already got pictures of a deer that’ll easily go for 250. If I can get three bucks in the 200’s, three straight years in a row, I might be the first person to ever pull that off.” Kukral’s monster whitetail scored 232 inches by the Buckmasters system (including inside spread).