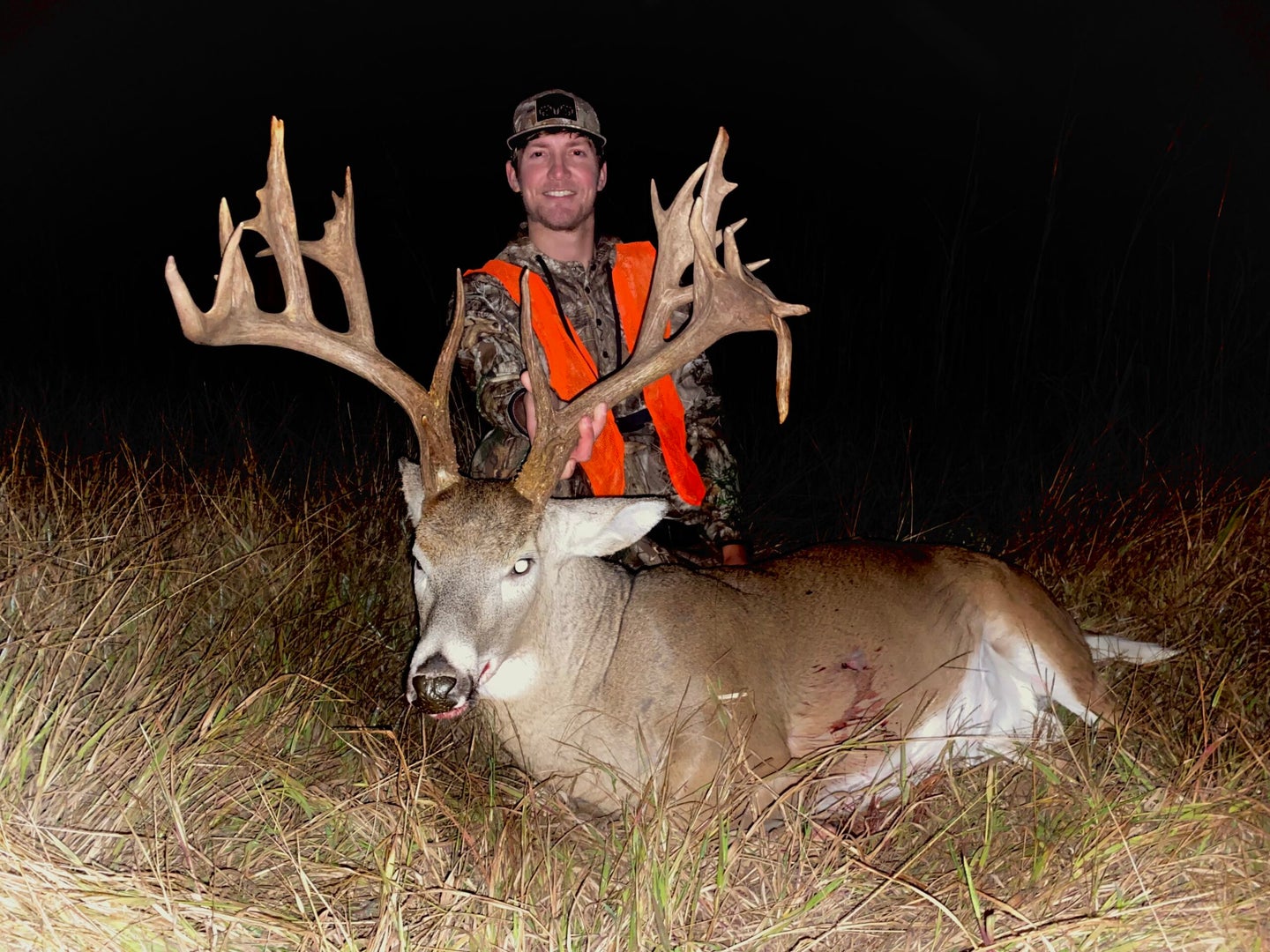 Being a full-time college student with a part-time job usually doesn’t leave much time to hunt. Thankfully, Oklahoma State University junior Cort Travis deer hunts on an 80-acre property that’s less than three miles from campus. The 20-year-old from Edmond, Oklahoma, made his time in the field count this muzzleloader season, cashing in on a massive non-typical whitetail on October 29.

The 22-point beast green-scored 213 inches with a palmated left side, a drop-tine, and stickers galore. After the drying period, it stands to place in the top 100 Sooner State non-typical whitetails ever killed. The state’s biggest on record is a 248 6/8-inch buck taken with a rifle in 2004. Travis’ buck could also place in the state’s top 10 muzzleloader bucks. There are only six muzzleloader bucks in the state record book with scores higher than the green score of Travis’ deer.

Travis and his roommate were both granted permission to hunt the property by their landlord. Following a September dove hunt, they placed a trail camera to assess the property’s deer potential, which revealed about 12 to 15 local bucks. But the big 22-pointer moved into the area just as muzzleloader season approached.

“I never got a single daytime picture of this buck,” Travis tells F&S. “Sometimes, I’d get him really close to legal shooting light in the afternoon, but for whatever reason, he wouldn’t come in.”

Travis admits to missing a couple of college classes while pursuing the beast, but he says that his trail cam pics helped him hunt efficiently. “The trail camera was showing me activity in the early mornings, but he wasn’t one of the deer on camera,” he says. “It would have been almost impossible to get in there without bumping deer, so I decided not to hunt much in the morning—which was good because my classes were done at 2:45 p.m., and my afternoons were open for hunting.”

The Hunt Came Together On Homecoming Weekend

Travis speculated that the buck was hitting the neighbor’s feeder at dusk before showing up on the property he was hunting just after dark. He decided to hunt the buck nearly every day of the muzzleloader season, no matter what. On the evening of October 29, Travis skipped OSU’s Homecoming Walkaround to go hunting.

As the end of legal shooting hours neared that night, Travis spied the buck just off of the property. He immediately texted his dad to tell him he’d spotted “the man.” Then a doe popped out from the woods and advanced in the tall grass to about 50 yards from his stand. “The wind shifted and began blowing directly at her,” Travis says. “She froze, lifted her head in my direction, and began sniffing. I was sure she was going to blow, and he wasn’t going to come in.”

The doe stomped her hoofs a couple of times but didn’t spook. A few minutes later, the big buck came in hot on her track. “All I could see were his head and horns,” says Travis. “He walked away along the tree line, but I couldn’t see his body.”

Then, the deer reversed course as if startled. He paused, giving Travis a perfect two-foot gap between branches for a shot, and Travis tucked a .50 caliber Powerbelt bullet right behind the buck’s shoulder. “I gave him 40 minutes before getting down from my stand. I found good blood fast, followed it for 15 yards, and then lost it,” he recalls. He called his dad, who was already driving up from Oklahoma City to help. “I told him we were going to back out, given him some more time, and come back in better light,” Travis says. “Then, I looked toward the tall grass, and there he was.”

Travis is having the buck, which is estimated at 4.5 years old, mounted at Terry’s Taxidermy in Oklahoma City. The neighbor who was also after the buck didn’t begrudge the young student for taking the trophy deer. He even showed Travis a trail cam photo of the same buck from the year before.

“He was a straight-up 4×4 with matching kickers off his G2s,” says Travis. “But being as young as he was, he had matching kickers, which showed he had a lot of potential. A typical deer might put on 10-20 inches in a year, but he put on roughly 50 inches or so. That’s almost unheard of.”

Travis hopes to hunt the same property again next year. He passed up several small bucks while chasing the big buck. He also had two other shooters on camera and hopes they’ll make it through to next year so he can chase them during his senior year of college. That said, his junior deer monster will be hard to top.