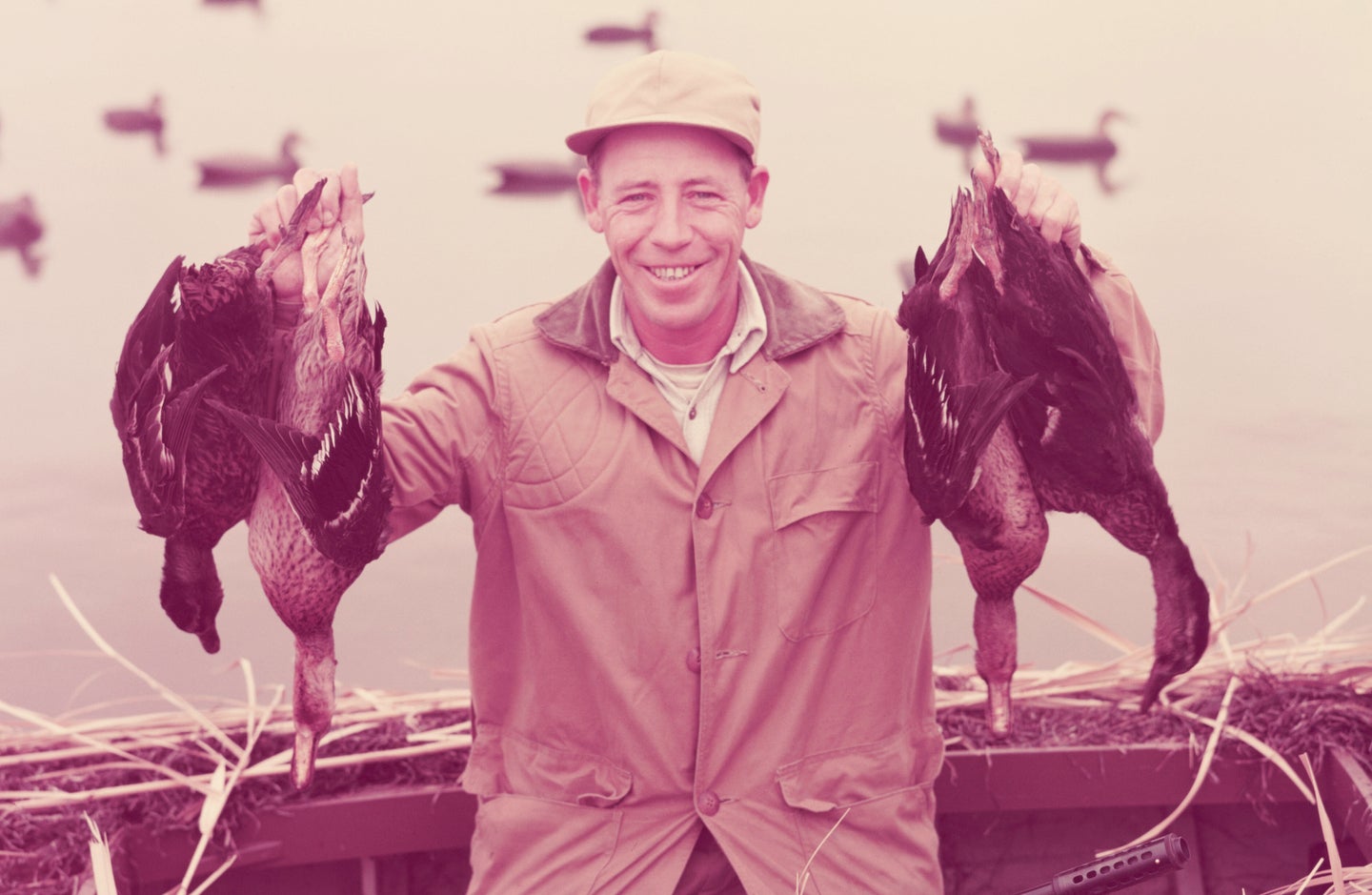 Let’s face it, there are only so many ways to catch a bluegill, arrow a buck, or dupe a mallard. Sure, some of the gear being used to catch said bluegill, shoot the buck, or fool that greenhead has been improved upon, but, the fact remains: The step-by-step and equipment probably came to be five decades earlier.

Take waterfowl hunting. With only a couple exceptions—the 21st-Century spinning wing decoy, and some of more metallurgically advanced non-toxic shot—most of that which is new is old. There may have been a twist or two here and there, but the basic premise behind item X or technique Y? Old. I’ve been there, seen that, and used it. You want examples? I have examples.

I’ll go out on a limb and say with almost 100-percent confidence that thanks to YouTube and Dive Bomb Industries, silhouette decoys today are bigger, badder, and more popular than ever—even more than when the late Tim Grounds was setting them up by the tens of dozens on his goose ground in southern Illinois. The Black Hole is what Grounds called his monster spread. I hunted over it on more than one occasion, and he wasn’t wrong.

But silhouettes aren’t new. In fact, they’re anything but new. Hell, my Pop and I were making our own two-dimensional goose decoys out of cardboard, paint stirrer sticks, and spray paint back in the early 1970s. (NOTE: If you’re cool, you call them skinnies or flats.) Before that, East Coast ‘fowlers targeting shorebirds, e.g. plovers and curlews, used silhouettes as far back as the early 1900s, and perhaps before.

Commercially available silhouettes from outfits such as Real-Geese hit the scene, circa 1990; prior to that, guys like me were cutting their own from plywood, countertop, the aforementioned cardboard, and a plasticized corrugated cardboard known as Correx (among other monikers) commonly found after the first Tuesday in November in the form of VOTE FOR ME political signs. But why the new interest in this Old School decoy? They work, simple as that.

Back in the day, we duck hunters were opportunists. If the birds decoyed, we shot them over decoys. Same with calling, if, that is, the birds paid attention. We floated streams and rivers, hunkered in fencerows, and did a little pass shooting. We did what it took to put birds on the strap, including jump shooting. Was I going to let a bunch of mallards sit on a local farm pond if Maggie the black dog and I had the chance to put a sneak on them? Absolutely not; they were going to get bothered.

But, like fanny packs and Ford Pintos, jump shooting fell out of fashion. And I’m not sure why, though it may have something to do with today’s thought—by some, not all—that anything short hunting with decoys and $250 single reeds is an abomination. Fortunately for those raised on the art, jump shooting seems to be enjoying a resurgence. I can’t honestly say it’s in vogue quite yet, but there appear to be more and more 12-minute YouTube segments devoted to jump-shooting both ducks and geese.

Why jump-shooting? Why now? Maybe it has to do with content; rather, the need for the social media waterfowling folks to present something new to retain subscribers and, hopefully, attract new ones. Either way, jump shooting, apparently, is cool again, and with good reason. It, too, works.

Years ago, I hunted snows with a friend of mine near Port Susan Bay in Washington state. For the time, Tony’s spread was huge—700 or 800 decoys—each one a small plastic garbage bag containing a rock or clump of mud, spun closed, and set open-end down. Yes, sir, garbage bags. Why garbage bags? They were cheap. They were white. And, with a little wind, they moved in a manner similar to real geese.

My point here focuses on the motion—something waterfowlers have been toying with for decades, but has (since the advent of the spinning wing decoy in the 1990s) recently exploded onto the duck hunting scene. But while the electronics, remote control units, timers, experiments with good/bad revolutions per minute, and more might be newer, the concept of motion or movement within the decoy spread is anything but.

Take jerk cords. Today’s multi-decoy fancy-dancy rigs, some of which involve circuitry and batteries reminiscent of spinning wing decoys, might be modern, but jerk cords themselves? Heck, we were using them 50 years ago in Wolfe’s Swamp—a tomato stake with an eye-screw, run of black cord, and one of the Old Man’s original Carry-Lite mallards. Bounce it, and hope for the best, whether yours be half a century old or Generation Now, but it ain’t nothing new.

On my everyday carry call lanyard, there’s an Olt A-50 goose flute, #557, inscribed as being modified by M.L. Weller. It’s always been there; always will be. Why? Because it’s easy to use, I can blow it, and it sounds like a real goose. I carry a couple short reeds, too, but I use them judiciously beause occasionally, I’ll conjure up sounds via the short reeds that aren’t real goose. In fact, I’m unsure if they’re anything of this planet.

This is why, I believe, flute-style goose calls are seeing a rise, albeit, perhaps, a moderate spike, in popularity in this modern age. Sure, short reeds are cool and undeniably versatile. But, if you’re looking for an out-of-the-box call that’s simple to use and sounds like a goose, well, then the flute is going to get the nod. And that’s what many folks are looking for in this short-attention-span era.

“I’ve never seen a reduction in long call sales,” says Sean Mann, creator of the legendary Eastern Shoreman goose call. “But I do see an increase in long call sales.” People, Mann says, are tired of sounding like the guy next to them in the blind or in the next field over, and they’re looking for something different. “It’s a lure in the tackle box that people don’t already have,” he says. “The long call is the Zara Spook among a pile of lead head jigs.”

But new? Flutes, I’d venture to say, were some of, if not the first goose calls to be made, I’m guessing entirely by hand, a century or more ago.

To be honest, I’m seeing this one both on the Internet, as well as in print—the latter more and more often today, it seems. Big spreads, particularly for dark geese (Canadas), have become the norm, thanks in part to the rise in popularity of silhouettes, e.g. Dive Bombs, and the ease with which these mega-spreads can be set out and picked up. And by big, I mean 15-plus dozen decoys. Ducks rigs? Nothing like the goose spreads, but dozens upon dozens of duck floaters, those often complemented with silhouettes, aren’t out of the ordinary.

What is out of the ordinary, though becoming more commonplace, are minimalist spreads—like six or eight good-looking, well-placed full-body Canadas or half-a-dozen flocked duck floaters and a jerk cord set on a little out-of-the-way puddle. There’s also an emphasis on scouting and concealment, and the ability to hit what one shoots at on a regular rather than accidental basis. Spreads like these, the theory says, give the birds something different to look at; something other than the up-and-down-the-flyway 48 mallard floaters and a pair of spinning wing decoys.

New? Sorry, no. Twenty-five years ago, Ron Latschaw, whom many consider the father of the modern layout blind, thanks to his creation of the Eliminator, told me of his eight-decoy spread for tackling tough late-season Oregon Canadas. Tone down your calling, quarter the wind, emphasize your hide, and be exactly where the geese want to be; that’s what Latschaw says. That, and use eight decoys. “When geese work to eight decoys everyone gets shooting,” he says.

As for ducks, these micro-spreads aren’t always the ticket. Six bluebill decoys set on Sandusky Bay might leave you wishing for a few hundred more. But eight mixed dabblers with a two-teal jerk cord placed on a scouted and well-used 15’ by 20’ puddle should be plenty.