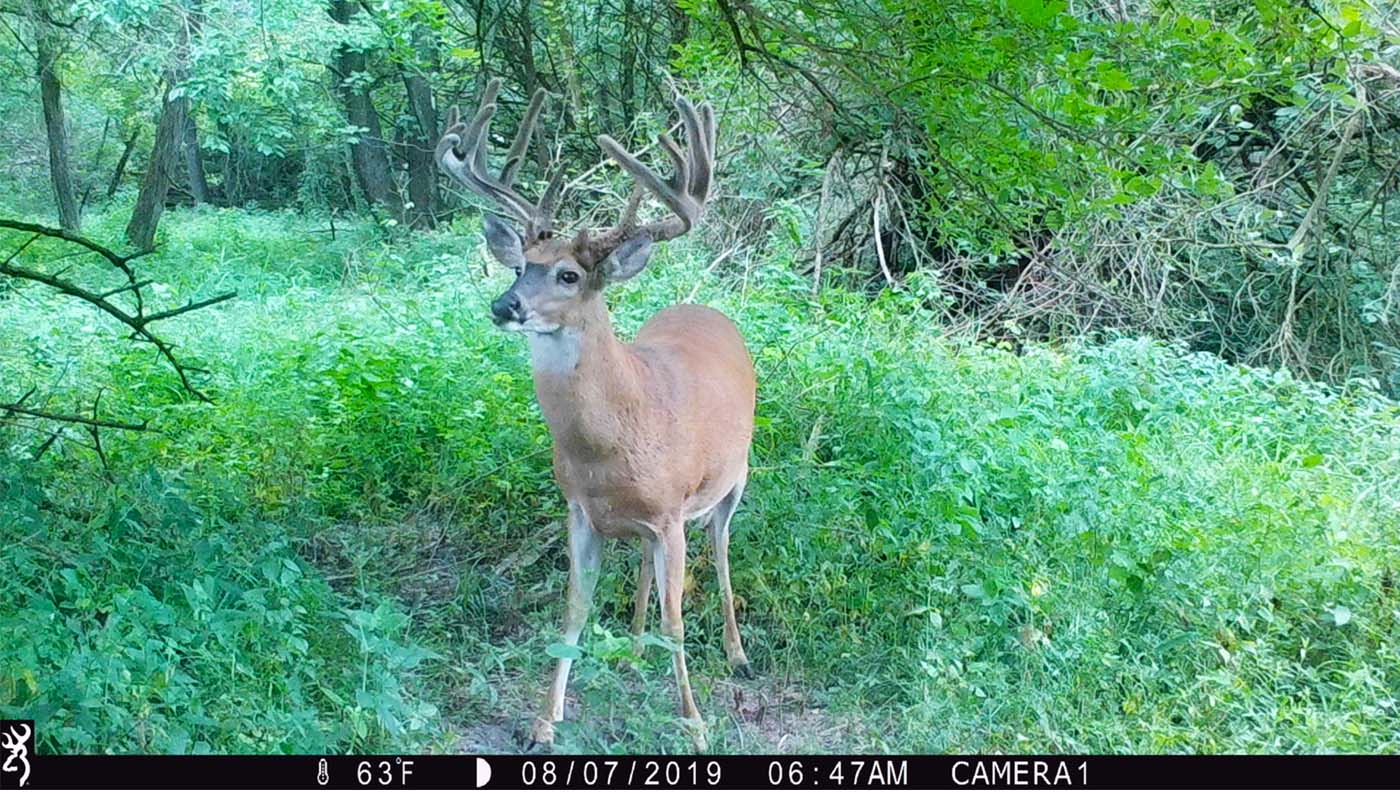 Summer trail cam pics like this tell you if a buck has made a big jump in antler size. Browning Trail Cameras
SHARE

A buck with a paunchy belly and the reddest coat sauntered across my back yard yesterday evening. He had a stubby 8-point rack with bulbous tips, and the velvet was backlit in a way that made his rack look like it was outlined in highlighter pen. I called my wife and two kids and even the cat over to the window to see, and they all oohed and awed, except for the cat, who made sort of a low growl.

It made me think that an antlered buck is a sight to see any time you get a chance to see one—and now that it’s midsummer, and bucks have some good antler growth, it’s time to get some trail cameras out.

Why You Should Use Trail Cameras in the Summer

Some deer hunters don’t bother putting cameras out until just before the season. They figure that the deer are going to change their patterns between summer and fall, so why bother? And they’re part right. Deer are going to switch things up some, especially when bucks shed their velvet. But these hunters are also missing an opportunity.

Summer cams do two things for you. First, they allow you to take a rough inventory of deer on your property to see what bucks made it through last fall and winter, if any have made a big jump in rack size, and what the fawn crop looks like. Second, summer cameras can definitely help you get on a good buck or two come fall, if you put them in the right places. So, here are the right places.

There are no better places to take an inventory of deer than at bait stations and mineral licks, where legal. Bachelor groups of bucks will hammer licks now to get the minerals and nutrients needed to grow their antlers. And in the process, they’ll fill up your SD cards with enough photos to give them all appropriate names and decide which ones you want to go after this fall. A camera with a slower trigger speed is fine here, and choose a longer interval between captures, or you’ll have more photos than you can sort through.

I don’t need to tell you that summer deer are out early most evenings, settling into summer’s lush ag fields and food plots for a good feed. These are great places to take an inventory of deer, too, especially in areas, like mine, where bait and minerals are not allowed. Put cams on all of your best fields and plots to find out which ones the deer—bachelor groups especially—are hitting regularly.

It’s true that some, if not most, of these deer will not be in these same spots, doing the same thing, come fall. They’ll change patterns or disperse or switch to another food source. But—and here’s the key—some may.

Some deer, including some of the biggest, will maintain their summer pattern well into the early bow season, providing one of your best chances of the whole year to put a tag on a whopper. What’s more, big, mature deer are well-known for having small core areas that they are very loyal to. If you find one on a summer food source and he disappears before the bow opener, there is a very good chance that he’s not far away and probably not hard to relocate. You wouldn’t know that if you didn’t have summer cams out. Depending on the size of the food source, you may need to stake out multiple cams, and go with models that have the longest detection ranges.

Summer deer drink as regularly as they hit those big food sources, but a water hole makes a much better ambush spot for a bowhunter than an acre of beans. So, find out where bucks are drinking, particularly in or near cover. Now, here’s a caveat: If your property has lots of water spread out over the landscape, this plan may not be practical. But if water is at all scarce, or if the major water sources are separated from the best deer habitat, then be sure to monitor those small sources closer to food and cover. You might just find a killer opening-day-of-bow-season stand location—and one that will probably get hot again during the rut. A wireless cam is not a bad idea in discrete spots like these.

Some trails are mostly doe trails. Some are buck-and-doe trails. And some are mostly buck trails. Now is a good time to sort out which is which. Be careful. This isn’t the time to push too far back into the woods where you might disturb bedding areas. It is the time, however, to put multiple cameras on woods-edge trails to see who is using them. If you’re short on cams—aren’t we all?—put a few on good trails and if you don’t get pictures of bucks after a week or so, move them to other trails.

Here, too, you might find a high-odds early-season ambush spot. But even if you don’t, you will learn more about how bucks travel through your property.

I think if you scuffed up the dirt to create a nice big bare spot and hung a camera on it in just about any place where bucks are close, you’d get them on camera. Most bucks just can’t walk past a new, bare patch of earth. But the best places to do it now are in staging areas, especially where you know bucks have scraped before or where  last year’s rubs and maybe even last year’s scrapes are still visible. Freshen those old scrapes, add a few of your own, put down some scent, and hang a camera. You are all but guaranteed to get buck picks in a spot like this, and, as you know, staging areas off hot early-season food sources make killer bow sets.

So yeah, summer cams are great for simply seeing some antlered bucks, which we haven’t had the chance to see in a while. And they give you a rough inventory of the deer herd well before the season. But if you’re careful—if you don’t check them too often and use wireless models in sensitive areas if possible—they can also help put a tag on a good buck come fall.

Read Next: The Best Budget Trail Cameras of 2022