Why You Should Snort-Wheeze to Early Season Bucks (Hint: Because It Works)

Most people think a snort-wheeze call is a mortal challenge between mature rutting bucks. But it's more than that—and can help you fill your buck tag right now 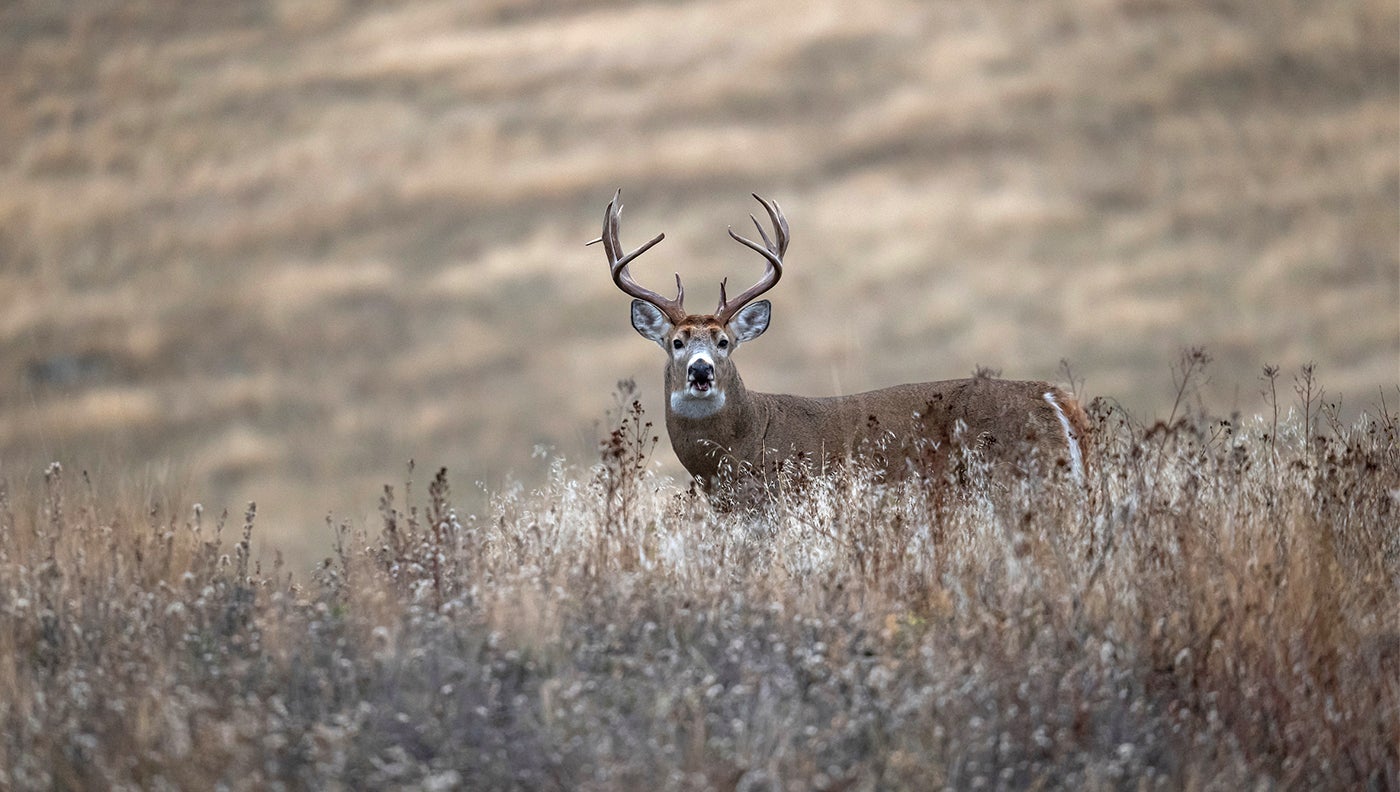 You'll know when a buck has heard you calls, because he'll almost always stop and stare. John Hafner Photography
SHARE

Whenever I think of snort-wheezing to whitetail deer, I think of my buddy Tony Peterson, who is a well-known outdoor writer and public-land whitetail hunting expert, not to mention a born skeptic. And I think of Inigo Montoya of The Princess Bride, who says to Vizzini: “I do not think it means what you think it means.”

Years ago, during a September public-land hunt in South Dakota, Peterson told me that he didn’t buy the conventional wisdom when it comes to snort-wheezing to deer. The call has always been and is still thought of as whitetail fighting words—a super-aggressive challenge that mature bucks make during the heat of the rut. Peterson’s take was, sure, it may be that—but it must be more than that, too, because he’d used the call plenty of times outside of the rut to call in bucks of all ages and sizes.

I thought that was interesting and gave it try on our trip. On two different days, I called in two bucks—a 2-year-old 8-pointer and an older 140-class 10-point buck—by snort-wheezing to them, probably 20 times each. Both deer were a fair ways off when I spotted them. Once I got their attention with a few snort-wheezes, I kept at it until I was sure they were going to close the distance. This was a bow hunt, however, and you know how bowhunting goes: you can call a couple of bucks into bow range but that doesn’t mean you’re going to get a shot at either. I ended up tagging a different buck on the trip, but I went home with a whole new outlook on snort-wheezing, particularly during the early season.

The Snort-Wheeze Call and What It Means

A commercial snort-wheeze call like this one can help amplify the sound somewhat.

Most deer hunters are familiar with the snort-wheeze call, but for anyone who isn’t, it is an airy pft-pft-pffffffft sound that you can easily make with your mouth. There are commercial snort-wheeze calls, but they’re nothing more than a small plastic cone meant to amplify the sound, which they don’t do a great job of from what I’ve seen. I’ve never found a good reason to carry one. If you just say pft-pft-pffffffft, letting air pass through your lips and really drawing out the last note, you’ll have it.

So that’s the call, but what does it mean? The answer is: It’s complicated, or at least more so that many think. I have seen a big buck or two snort-wheeze at a rival during the rut, and it sure seemed serious. I’ve snort-wheezed at a few bucks during the rut myself and watched the hair on their backs stand up before they started stiff-legging it toward me. I’ve also watched mature rutting bucks turn tail and tear off in the opposite direction of my snort-wheeze call. So, during the rut, when big bucks are vying for breeding rights, the snort-wheeze really does seem to be the mortal challenge most hunters have been told it is.

But since that hunt with Peterson years ago, I have also snort-wheezed to dozens of early-season bucks and watched them react with perfect nonchalance and/or mere curiosity. This time of year, it seems to be nothing like the mortal challenge it is during the rut. Also, whereas the snort-wheeze is usually associated with dominant whitetails, I’ve watched early-season bucks of every size, from yearling spikes to older deer, come jogging in to the call, with hardly a hint of aggression or fear. In other words, prior to the rut, at least, I do not think it means what most everyone think it means.

When and How to Snort-Wheeze to Early-Season Bucks

What I do think is that because of the prevailing wisdom about snort-wheezing, very few hunters use the call during the early season. But you should—because it absolutely works if you use it under the right circumstances. In fact, I would say that snort-wheezing is far less risky now than it is during the rut. I’ve sent more than one buck packing with the call in November, but I can’t think of a single early-season buck I’ve spooked by snort-wheezing.

I’m not suggesting you climb into your bow stand and start pft-pft-pfffffting every few minutes. It may work occasionally as a blind call, but I wouldn’t use it that way. I think that as a general rule, bucks don’t like to be surprised at close range—not by rattling horns or a decoy or by loud calling. From what I’ve seen, the best time to use a snort-wheeze for early-season deer is when you spot a buck or bucks that are well out of bow range and don’t seem to be coming your way on their own. In this situation, which happens a lot during bow season, you’ve got nothing to lose—and an unexpected shot at a buck to gain.

The Perfect Example of When a Snort-Wheeze Call Works Now

I’ve called a fair number of early-season bucks into bow range by snort-wheezing, but the one that makes for the best example was the buck I tagged last fall. He was one of four that stepped out of the timber and sauntered over to a mock scrape I’d made at the far edge of a cut cornfield. A short-tined 9-pointer with a big body, he came out last, pushed the smaller bucks around some, and then stood at the top of a little knoll, where he could survey the field and sort of ooze swagger. There was no reason to think he’d take a hard right turn and walk 150 yards to my bow stand. So I snort-wheezed to him a few times until he turned and stared in my direction. I snort-wheezed again, and he lowered his head and started walking toward me, swaying as he stepped. Apparently, the other bucks figured that if the big guy was going, they were, too, and all four wound up right under my stand. At the shot, the 9-pointer he ran 50 yards and tipped over.

Fast-forward to this past Saturday evening, our bow opener, and from the same stand I watched an 8-point buck and a bigger-bodied 7 step out of the same timber. The farmer had planted the field to clover this year, and the bucks were slowly working away from me as they munched the greenery. When they got about 200 yards out, and it was clear they weren’t going to change direction and feed my way, I started snort-wheezing. Several times they looked up, stared for a few seconds, then went back to feeding—until, eventually, after maybe a dozen calls, the 7-pointer pawed at the ground a bit and suddenly decided he was coming. Once he broke, the 8 came with him. I called one more time, when they were about half way to me, to keep them on track, but that was it. They walked to a patch of clover I ranged at 32 yards, looked around for a while, and eventually started feeding again.

Part of my usual mantra when I draw on a buck is to mentally call out the yardage, which reminds me to use the right sight pin. But like the bonehead I can sometimes be, I forgot to do that this time and used my 20-yard pin instead of my 30. I shot right under the buck, and as the arrow zipped past, both deer scampered off to about 100 yards, not sure what had happened.

There’s no excuse for such a stupid mistake. And it’s definitely going to eat at me for a while that I should have snort-wheezed in and killed two early-season bucks from the same stand in consecutive years—but didn’t. Still, if you want to know what a powerful effect a few snort-wheezes can have on a buck this time of year, you should know that the 7-pointer, after 10 minutes or so of confused rubber-necking, eventually pawed the ground again and walked back to within 40 yards. It was a little far to shoot at an on-edge buck, and he never gave me a good angle anyway. So, I figured I’ll just give him a few days to forget about it and try him again. And if he—or any other buck—is out of range and not coming my way, I will definitely snort-wheeze at him.