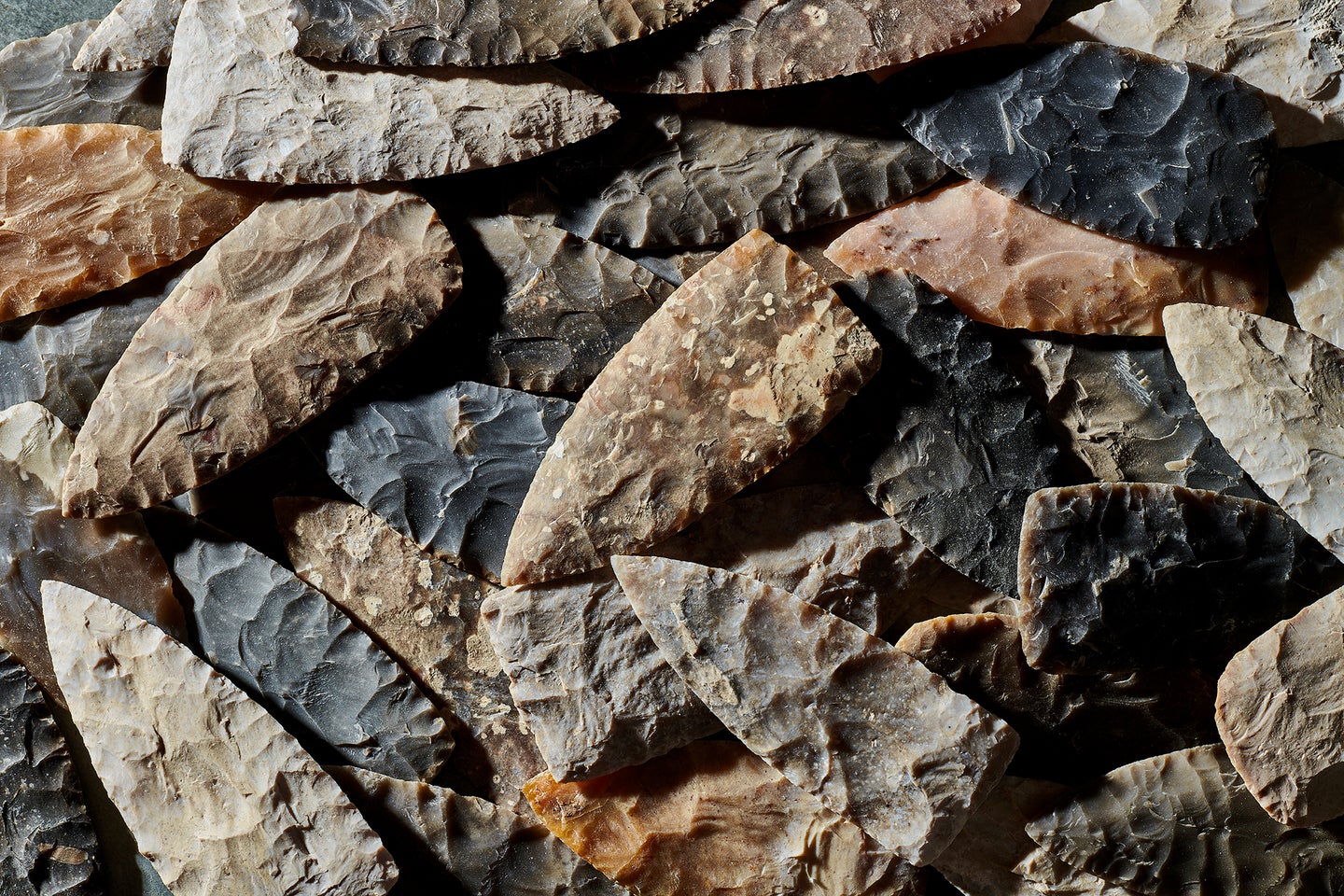 Long before we had fixed or mechanical broadheads that came razor-sharp right out of the box, hunters made their own. Some still do, in fact. These were made by Florida artisan Ryan Gill, who hunts with the stone points he knaps by hand. Stephen DeVries

The Absolute Limit: How Technology Has Transformed Hunting

Some advancements in hunting gear have revolutionized the sport for the better. Others call into question the very idea of fair chase

LIMITS GOT OFF TO A SLOW START. Humans (or their ancestors) began hunting 2 million years ago. But until 800 years ago, setting limits on what you could kill and giving animals a chance to survive would have been regarded as insane.

For nearly all the time we’ve been clubbing and spearing and shooting, getting enough to eat was a desperately uncertain business, and hunters’ rules of engagement were three:

2) Kill its kids too, because they’re probably even better to eat.

3) Kill it by whatever means offers the creature the least chance to escape—or the least opportunity to put your lights out.

Agriculture changed this way of thinking. By the Middle Ages, most of the European forests had been cut down for farmland, and much of the wildlife had been eaten or, in the case of predators, exterminated. The result was not much hunting. So European royalty and nobility, having never lost their taste for the blood sports, decreed that taking game animals was off-limits to anyone but themselves, and they enforced this with a vengeance. In Holland, if you had a dog that chased rabbits out of your garden, the game wardens would stop by and chop off a paw. If you poached, they would take out one of your eyes.

Limits were the law, and eventually there evolved the concept of fair chase. The designated critter, decreed the kings and nobles, was not to be taken by the most efficient means, but by sporting means, whereby the animal had a chance to get away.

In the New World, hunting went in the opposite direction. No sooner had they arrived than game-deprived colonists turned to wholesale killing. When the Pilgrims landed, there were an estimated 3 billion to 5 billion passenger pigeons in North America. In 1914, the last one died in a Cincinnati zoo. In 1800, there were 30 million to 60 million buffalo. By 1900, there were 300.

As we lurched into the 20th century, unregulated killing finally stopped. Hunters accepted that there had to be limits or there would be no game left at all. And the means had to be sporting. Thus it has been for a century.

Now there’s something else at work. We may observe the letter of the law, but we ignore its spirit by our steamrolling use of technology. So overpowering has tech become that we are able to nullify the survival tools it took animals eons to develop.

Game has only a few tools in its arsenal: sight, scent, hearing, speed, and cunning. These evolved to defend them against predators that operated at bad-breath distance and humans who operated inside the range of primitive bows and arrows. But back off far enough and everything changes. Animals have no idea you’re around, and if you shoot, they have no idea where the shot came from, and so they’ll stand and try to figure out what’s happening, and by the time they do, if they do, it’s too late.

Along with this reliance on electronics, there has come a decline of skill. If you navigate by map and compass, you have to master three separate skills: the use of the magnetic needle, the comprehension of topo-map hieroglyphics, and the ability to read that map and get a good sense of what lies ahead of you. Or you can use a GPS, and be a guy who can operate a computer.

Do you yearn to shoot at long distances but want to dispense with time wasters like spending years on the range, sending thousands of rounds to the target to master the mysteries of wind and trajectory? Fret not. Spend $30 for a ballistic app for your smartphone, and it will give you a firing solution. But then you’re not a marksman. You’re a guy with a smartphone and a $30 app.

Because there are no limits to the electronic gear we can use, I’m afraid that we are transforming ourselves into so many armed geeks.

I don’t yearn for the gear of the past, nor do I automatically reject technology. You couldn’t give me a scope or a binocular from the 1950s.

I think the accurate, inexpensive chronograph is an invention that ranks alongside the jet engine and antibiotics. I think Wilbert and Robert Gore, who invented Gore-Tex, should have statues erected to them. I think the all-copper big-game bullet is not only a good idea ecologically but a terrific bullet generally. I like dry feet and high-tech hunting clothes that weigh a third of wool and do a better job.

But some gear does too much and goes too far, though I know of only one case where it has been rejected wholesale because of this. This was the TrackingPoint shooting system, which debuted in 2013. It was a rifle that was connected to a TV monitor and a computer and worked out everything. TrackingPoint lased the target and figured out where to hold, and when you put the crosshair where the computer told you to, the rifle allowed you to shoot. This was a bit too much for the hunting public, and that, combined with the TrackingPoint’s $27,500 price, put the company out of business in 2015. TrackingPoint is what happens when there are no limits. Next time, who knows?

Hunting and fishing are limited by the law, but the law goes only so far. The limits you set for yourself come from you alone.