Q&A: Teenage Waterfowl Photographer Is Fast Becoming One of the Best in the Business

Before his 16th birthday, Brandon Fien got a cover shot for Wildfowl magazine. Now, barely out of high school, he’s working full time as a wildlife photographer and hunting guide 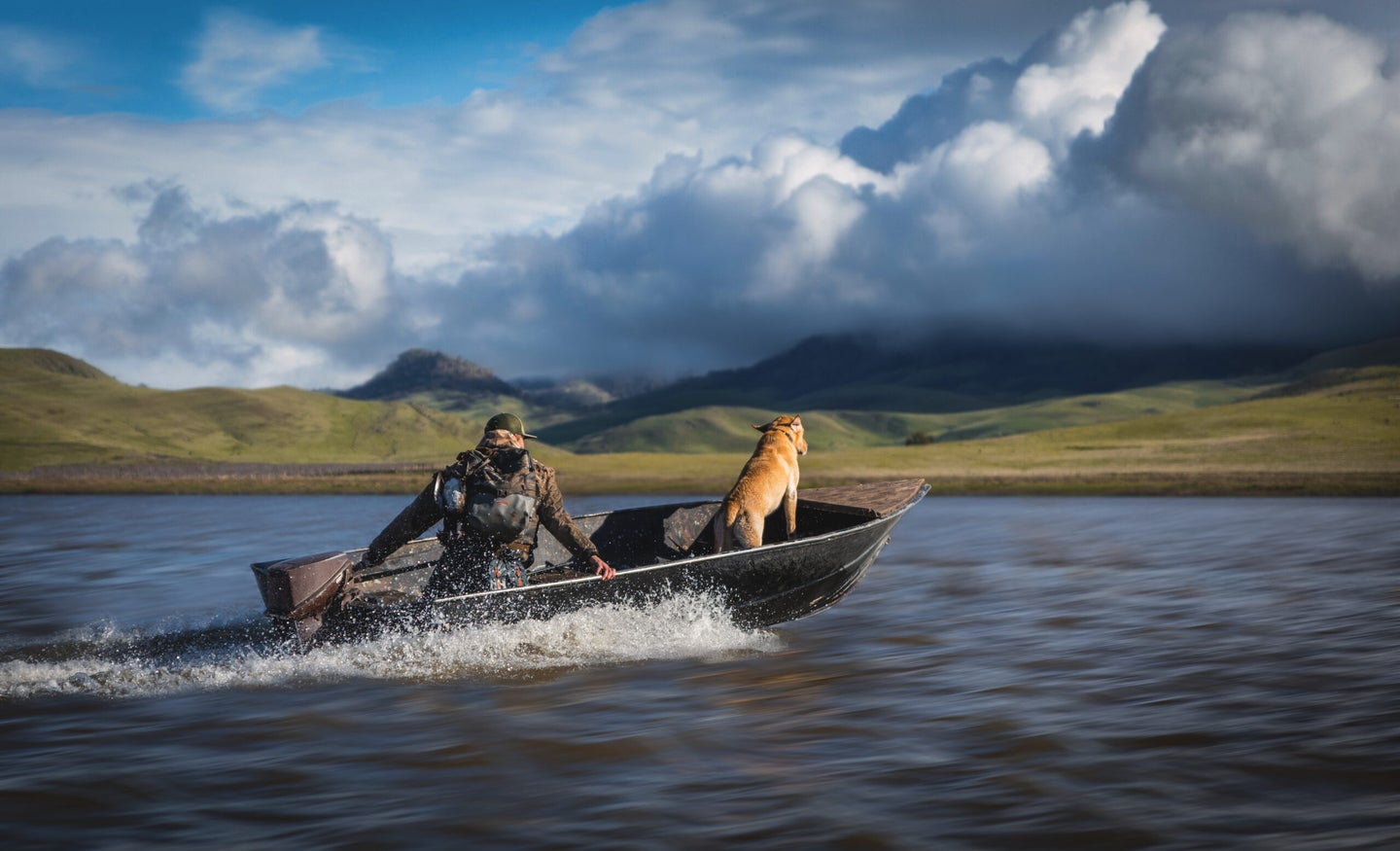 A hunter and his dog cruising through the flooded Sutter Bypass after heavy rain as more clouds form in the distance. Brandon Fien
SHARE

In 2018, an image of a black lab looking up into the sky for ducks graced the cover of Wildfowl magazine. In my opinion, it captured the essence of what it’s like to hunt waterfowl with a dog. What is even more impressive—it was taken by then 15-year-old Brandon Fien. Three years later, at 18 years of age, Fien is considered a waterfowl photography phenom.

Fien is originally from Vacaville, California and now lives in Fort Collins, Colorado, where he works for Latendresse Media Collective as a content creator. He grew up chasing ducks in northern California with his dad and buddies, and nothing gets him fired up more than sunrise in the duck blind. He spent last duck season guiding and taking pictures for Prairie Rock Outfitters in western Nebraska.

Fien’s waterfowl hunting photography has a voice of its own, and his reputation continues to grow in the industry as one of the best up-and-coming wildlife photographers. For Fien, capturing the perfect image on a hunt is just as rewarding as shooting a limit of ducks. His camera never leaves his side, and he’s always looking for the next great shot.

Q: When did you pick up a camera for the first time?

A: I played baseball competitively for my entire childhood, and when I turned thirteen, I got an arm injury that prevented me from playing. I started drawing pictures of ducks, and I still have these drawings framed on my wall at my house in California. After about a year of drawing, I didn’t want to be stuck in my room anymore. I was looking up images of ducks on the internet, and it got to the point where I wanted to be the one who took those pictures. One day I found a camera in my mom’s closet. I went down to the creek and started taking pictures of wood ducks. I was fourteen at the time and riding my bike everywhere from local lakes to creeks and ponds to find ducks. I haven’t looked back since.

Q: Today, it seems like everybody has a digital camera and is taking great photos. How do you separate your shots and make them stand out?

A: I don’t think I stand out among other people, but I try to do my own thing by telling a story through a hunting perspective—whether that’s with gun dogs, people, or ducks. I take images that mean something to me. I add a specific style to my images through the way I edit. When I get back to the computer, I try to recreate the photos the way I felt them. If it was a cold morning, I try to use cool tones. If it was a hot day, I use warm tones. I think the post-production value of photography is more important than ever before. I always get messages from people asking what camera and lens I use. But every waterfowl photographer pretty much has the same cameras and the same lenses. That’s why post-production editing is so crucial.

Q: What’s the most challenging photo to get?

A: I don’t set up my shots. Everything I take is entirely natural. All of my favorite images just happen in the moment. It might be a silhouette of a dad and a kid, a dog licking a pile of ducks, or a group of ducks coming in. As a photographer, the toughest thing to do is capture an authentic moment. You have to make sure your settings are always top-notch, your lighting is right, and you are always ready to get the photo.

Q: How do you balance the choice of picking up a gun or camera when ducks are coming into a spread?

A: That’s something I struggle with. Last season, while guiding and creating content for Prairie Rock Outfitters, there were many days when I didn’t have my gun with me. I didn’t have any other choice but to shoot photos. But when I’m not guiding, it just depends on the day. Usually, I shoot photos in the morning because the lighting is better. As the day goes on and the sun gets higher, I tend to pick up the gun more. If everyone I hunt with shoots limits, and I only shoot three or four birds, I’m totally fine with that. There are a lot of days I walk out completely satisfied with having taken a great image—more so than I would’ve been with six ducks in my hand.

Q: How did you like your first year of guiding?

A: I loved it. I’m a very social person, so meeting different people from different cultures and places was super fun. It’s a little bit of a culture shock coming from my high school in California. But it was one of the coolest seasons I’ve ever had. I couldn’t have asked for much more.

Q: If you could only bring one lens to the blind with you, what are you going with and why?

A: My Canon 70-200mm. It’s technically a telephoto lens, but it has a 2.8 aperture. As you zoom in on your subject to 200mm, you add something called compression. This separates your background from your subjects even more than the 2.8 aperture does. I would choose that lens, even though in the blind, it’s not ideal. But I’m getting in and out of the blind regularly to photograph dogs and film ducks. It is a toss-up between that and my Canon 50mm 1.8—which is more of an in-the-blind lens.

Q: What do you believe makes for a great waterfowl hunting photograph?

A: If you can get the viewers to connect to your photo, then you’re already ahead of the game. It’s one thing to post a picture of a duck landing in the decoys, and another thing to capture a truly unique photo. If there’s a photo of a dog looking up into the sky with ducks in the background, or a kid walking through the marsh with a 20-gauge, people instantly connect to that. If you can take an image that connects to a viewer, then you know you’ve got a great photograph. The quality of the image is not as important as the story that the picture tells.

Q: Do you ever feel like you’re educating ducks when you’re out just taking photos of them?

A: If I was to go out, set up decoys, call, and pretend it’s a hunt just to take pictures of ducks then yes. I prefer to just shoot photos of ducks in areas I don’t hunt. That means going to places out of season to take photos, or at refuges where hunting isn’t allowed. Shooting photos of birds is tougher than shooting a limit of birds. There are a lot more variables that go into taking pictures of waterfowl. If I walk out with one solid bird image, then I’m thrilled. But, to go back to your question, it’s a yes-and-no answer. Depending on the time of year and where you are, you can educate birds when you take pictures because they see a decoy spread and hear your call and might even see you.

Q: Have you learned anything from taking pictures of ducks that has made you a better duck hunter?

A: Oh, without a doubt. When you let birds land in the decoys, you see some cool stuff. You’ll watch them do courtship activities, and they’ll make weird noises. Hen wigeon make a noise called a growl, and not all hunters can replicate it. One time on a hunt in California, there was a flock of wigeon overhead, and I did the growl on my mallard call, and the whole flock turned right in.

When taking photos of waterfowl, you learn more because you take out the variable of shooting. You let the ducks get closer, land, and you get to see how they act in the water. You get to see how their head positions are. And you start asking questions like, why did three drakes land there and four hens over there? Why do spinners help on this type of day compared to that type of day? You can kill a duck at 50 yards, but to get a picture, you need the duck at 15-30 yards and they need to be finishing. Getting them to land is the goal, and if you can get seven ducks to land, that’s better than having twenty ducks fly by within shooting range.

Q: Who are some outdoor photographers whose work has influenced your own?

A: From the beginning, Jake Latendresse has been a huge help in my career. We connected on Instagram three years ago, and he flew out to California, and we met up. Jake later became my mentor. I really look up to him. When I was getting into shooting waterfowl, Ryan Askren and James Leash were other photographers I looked up to.

Read Next: 31 Incredible Hunting and Fishing Photos From Field & Stream

Q: What camera gear do you use, and what is your go-to set-up right now?

A: For the longest time, I was shooting with a Canon 5D Mark IV, and I love that camera and still use it. In the last two months, I’ve picked up the Canon EOS R for video. For getting still images, I prefer the Canon 5D Mark IV because it has a different feel than the EOS R. It’s not as high-tech. It’s more gritty and raw. As far as lenses go, I use a Tamron 150-600mm for waterfowl and wildlife. I also use a Canon 70-200mm, Tamron 24-70mm, and a Canon 50mm 1.8 aperture.

Q: How many photos do you shoot on an average hunt?

A: It depends. If it’s a cloudy day, I typically shoot more because the lighting is even and flat. If it’s a good hunt, I shoot more, and that usually falls somewhere between 600 and 800 photos. If it’s sunny or if the light was only good in the morning, I’ll only shoot 100 to 200 images. Every day is different, and it depends on the conditions. If I walk out with five to ten solid images and one great image, then I’m completely satisfied.