You already know to hang some stands of field and food plot edges. Here are lesser-known spots that will help you punch a tag right out of the gate 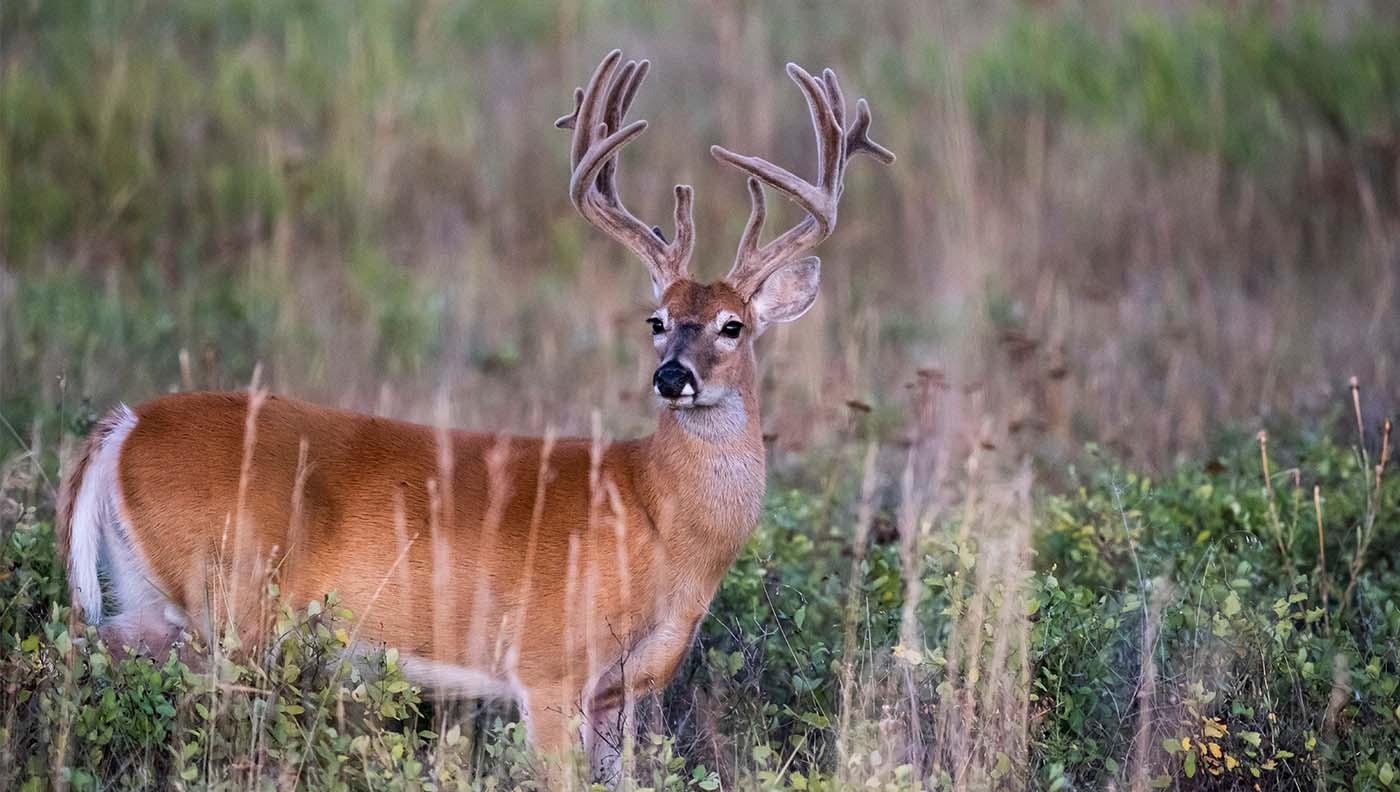 This buck is apt to switch up its pattern after velvet shed. You need to be ready. John Hafner Photography
SHARE

The buck left little doubt about his preferred food sources. The massive, main-frame 10-point had been a regular visitor to soybean and alfalfa fields for much of the summer. He’d been a regular on our trail cams too. But on a pretty afternoon in the first week of the September archery season, my hunting partner set up on the buck near the very fields producing those pictures, while I opted for a secluded food plot over a quarter mile from the main groceries. I’d have put my money on my buddy killing the buck that night—but it’s a bet I would have lost. The monster 10 wandered into my food plot, and I battled shaking knees and shallow breathing just long enough to make the shot.

This time of year, when bucks are highly visible at crop fields and food plots, it’s easy to get locked in to hunting the edge of the groceries. Don’t get me wrong, this can work great. (I have three great September bucks on my wall as proof.) So hang stands on those food edges and hunt them, but don’t forget that as likely as it is that a buck will show there, it’s probably an even safer bet that some other food source, or a weather system, or velvet shed, or small-game hunters, has already caused that buck to switch up his pattern.

That’s when it’s handy know the spots early-season bucks love to go when they are no-shows at the field edge you’ve been sitting on. Here are the five best overlooked early-season stand locations where you can get back on a field deer that once seemed as predictable as the sunset.

Of course ag fields and food plots are high on the early-season whitetail menu, but nothing—I mean nothing—tops the first acorns of fall. While any oak nut hitting the ground is gonna attract a buck, white oak acorns are like crème brûlée (delicious) and a ribeye (nutritious) rolled into one food. And since white oak acorns are typically the first to drop each year, count on them to be an early-season curve changer.

The key to adapting to this is knowing the location of any significant oak stands in your hunting area. Ideally, this is best done months ago, but you can still make brief scouting forays now to pick these clusters out. Bring binoculars and scan the ends of limbs and you should be able to spot clusters of acorns. As soon as your field-munching bucks go AWOL, slip back into those oak stands at midday and do a hang-and-hunt on the best spots. Or hang a stand ahead of time.

While early-season bucks can and do maintain summer feeding behavior, there’s a whole lot of stuff happening to throw them off their patterns. Fall leaf drop is brightening the woods and causing bucks to feel a little light-shy and, perhaps more important, bucks have lost velvet and are feeling the growing dump of testosterone in their system. In short, they’re acting more like bucks instead of other deer; rubbing trees and brush, making scrapes, and working out social dominance issues.

While this activity occurs wherever bucks linger, staging areas—typically small patches of brush or saplings—just off a food source are one of the prime spots. As the name implies, these are places where bucks stage before heading out to the main feed. They rub saplings and trees, make and check scrapes, and often interact (including fighting and sparring) with other bucks. Sometimes this behavior lasts so long the bucks won’t reach fields or food plots until well after dark. Finding staging areas is usually pretty simple; just walk entry trails back from food sources to the first dense cover you find, then look for buck sign. The best early-season staging setups are typically close to (within 100 yards) the destination food source. Anything deeper back than that and you’re probably pushing too close to a buck’s bedding area. So be careful.

As if there weren’t already enough tasty foods to distract a whitetail’s focus now, along comes the soft mast of early fall. Apples, persimmons, and pears are all on the short list of soft-mast species that will take a normally-predictable field feeder and turn him into a fruit junkie overnight. I vividly recall a nice Wisconsin buck I was after several years ago. The heavy 9-point was a regular at an alfalfa field in the weeks before the mid-September opener, and I was pretty confident of at least a close encounter. Suddenly he and the small band of does he was with seemed to disappear, and it took me a week to figure out that they were dallying in a small orchard teeming with early-season apples.

Like the oak stand hunt, adjusting to the soft mast drop is largely a matter of anticipation. Scouting orchards and isolated trees is best done in spring and summer, not only for locations, but crop potential; when I see abundant blossoms on my May turkey hunts, I know apples are going to be a factor come September. If I discover soft mast crops once the season is open, I rely largely on hang and hunts, focusing my efforts on buck sign occurring close to fruit-dropping trees.

I live in ag country, so there is no shortage of alfalfa, soybean, and corn fields where an early-season buck can fill his belly. While it might seem like food plots are unnecessary with such food abundance, we still plant them annually and religiously. These are hunting plots, not designed to bring deer through a hard winter (though they can help), but to create shot opportunities.

The best of these are located near, or surrounded by, dense security cover, and while they attract deer throughout the fall, they can be at their best in the early season. These small hunting plots not only attract bucks ready to feed, but they serve much like a staging area—a place where deer can linger, lay down rubs and scrapes, and spar with other bucks, while grabbing a snack before the main meal.I killed my largest archery buck on such a plot. The gross B&C buck came for a few bites of brassicas before heading toward a nearby alfalfa field. He wandered close enough to my stand that he never made the trip to the hay.

It’s no secret that afternoon temps in the early season can make a splash in the pool seem like a better idea than a couple hours in a stand or blind. Well if you’re feeling that way, deer are too. This makes hunting a water source, particularly one close to or witthin the confines of cover, a perfect strategy. It’s hard to underestimate the attraction of water to deer, but whenever I need a reminder, I recall a buddy who killed a great buck a few seasons back. My friend spotted that deer as it lingered in the woods for many minutes, not entering an adjacent field until it was too late to shoot. Pat checked out the lingering area the next day, expecting to find a cluster of rubs or scrapes indicating a staging area. Instead he found a large, hollowed out oak stump that was holding water. The buck was stopping to drink and dawdle there, and Pat shot him at that very spot two nights later.

Obviously, not all areas have a handy water-catching stump, and it’s fairly common now to construct a waterhole, using heavy equipment or by simply installing a tub or pool (widely available at farm-equipment stores). Lacking that, never forget to check out creek and stream banks for deer crossings, paralleling trails, and of course buck sign. Any time temps are pushing the warm side (above 70 degrees in my Midwestern hunting areas), count on water to be a huge draw for an early season buck.