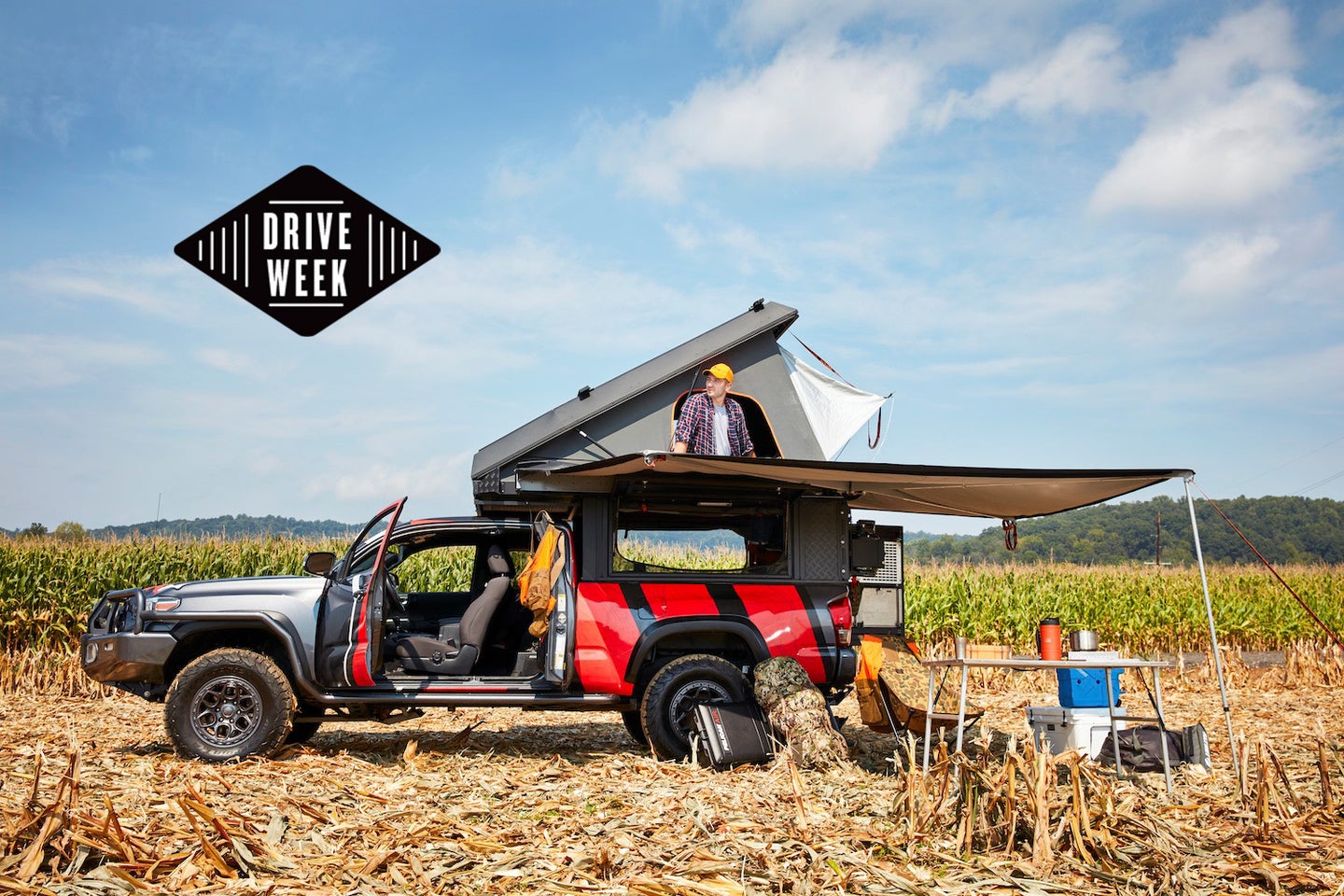 The author looks out the window of the fold-down bed of an Alu-Cab Canopy Camper. OK4WD imports the campers from South Africa. They can be installed on a variety of pickups. Christopher Testani

We Spent 50 Days Hunting From This Badass Overland Rig. Here’s What We Thought

LAST FALL, my wife and I spent over a month and a half on a hunting road trip across the United States—and you can read all about it in the latest digital edition of F&S. While planning for our trip, we knew we wanted a capable vehicle that we could not only camp in, but that could take us up any road in just about any conditions. That’s why we turned to OK4WD in Stewartsville, NJ.

OK4WD has been building off-road vehicles for over 40 years. They are experts at turning factory trucks into adventure vehicles, and they are the U.S. importer of Alu-Cab, Campcover, Madcon Brais, and OEV campers. After over a month on the road, here are our thoughts on the truck and a bit about how OK4WD’s owner and founder, Jim Oostdyk, and his team put the rig together.

The Inspiration Behind Our Road-Trip Rig

In 1979, Oostdyk wrecked his CJ5 Jeep got to work fixing it, kicking off a life-long interest in four-wheel-drive vehicles. That same year, he founded OK4WD out of an old gas station with a two-bay garage. Four decades later, his company has grown to a six-bay solar-powered shop and a showroom stocked with the latest overlanding campers and 4×4 accessories available in the U.S.

Depending on the modifications, it takes about two weeks for OK4WD to turn around a project. They see all kinds of vehicles in their shop, but they like to work on newer rigs mostly because of rust damage that’s common to the Northeast. “A customer will usually buy a vehicle and then bring it to us,” says Oostdyk. “But we are also considered a new car dealer. This allows us to buy incomplete vehicles such as a chassis cab, and put a camper on it and then sell it as a brand new vehicle.”

The rig that we used for our trip was a Toyota Tacoma that OK4WD owns and uses for shows, demos, and also lends out to employees on the weekends. “When Toyota came out with the new Tacoma, we really liked the look of them and wanted to set one up as a capable off-road vehicle,” he says. “I think Toyota’s strong suit is their reliability. They’re capable right from the factory. And I think that makes them a perfect vehicle for overlanding.”

The first thing a lot of people noticed while we were on our trip was the Alu-Cab Canopy Camper. Most people thought it was a utility cap for holding tools, and its diamond plate exterior lends itself to that look. But the Canopy Camper is a self-contained camp that slides into an existing pick-up truck bed. When deployed, the camper is comfortable enough for two people to sleep and live out of. When folded back up for transportation, it’s strong enough to put up with the rigors of intense off-road driving.

“The beauty of Alu-Cab is they’ve got all this experience,” says Oostdyk. “They build campers for the Avis safari rental market in Africa. So they’ve got 20 years of R&D that you just can’t get anywhere else. They know the weak points, strong points, and what they need to do to build that camper precisely for that overland market. We went down to Africa, and we were able to bring a lot of what we learned back here to develop our rig. [In Africa], we were on washboard roads all day long, which generated an incredible amount of dust. The trucks we drove really got used hard.

“Other campers use the factory tailgate. They’re more like a cap that goes on a truck. The problem with that is, to get in and out, you’re fighting the tailgate all the time, which is awkward. But the biggest issue is that when you go into your camper after a long day on the road, you’re going to go into a dust bowl. As you drive, you get negative pressure in the rear, and it sucks dust in through a tailgate because you can’t seal a tailgate very effectively. The Alu-Cab replaces the tailgate with a totally sealed door.”

When the camper is opened up, its roof rises via gas struts to reveal a bed. When not in use, the bed can be folded into the ceiling so you can stand up in the camper. This really helped on cold mornings when we were getting dressed for a hunt. There are also cabinets and drawers that line the interior, LED lights just about everywhere you’d need them, a propane fireplace, and a freezer/refrigerator combination. The freezer portion allowed us to freeze birds we shot and keep re-freezing icepacks for our cooler, so we could keep a lot of food cold almost indefinitely.

“A fridge just makes camping so much better,” Oostdyk says. “You don’t have to worry about buying ice, everything’s cold, and nothing is floating in water. And they last. We’ve been selling fridges for over 20 years. They are expensive, but I have some customers that have had their fridge for almost that long.”

OK4WD installed a dual battery system under the hood of the Tacoma and a Sunflare solar panel on the roof of the camper. When the truck is turned off, everything runs off of the solar panel and the batteries—which rarely dipped below 90 percent power during our trip. At one point, we were able to run the refrigerator, lights, heat, and charge our electronics for over a week in partial shade without moving.

Outside of the camper, there is a wrap-around Alu-Cab 270 Degree Shadow Awning which worked great for sunny days and rain. OK4WD sells attachable panels that can turn the awning into a tent-like structure so you can store gear or have a place for guests to sleep. We also had a shower tent and a fold-up table that stowed just over the roof of the truck. OK4WD can install water tanks in their campers, but we didn’t have one in ours. Onboard water can extend a trip even further and is a huge plus for hunters who need to wash and keep dogs hydrated.

Exterior, Suspension, and Other Modifications

OK4WD doesn’t just build trucks to look good, they build them to function properly in harsh environments. To do so, they feel it’s important that each upgrade works in tandem with the others. Balancing the weight of things like camper tops and big tires is essential for the truck to ride properly.

“A lot of the vehicles that you buy now are pretty capable right from the dealer,” Oostdyk says. “But if you’re going to put a lot of weight in certain vehicles, you may have to upgrade your suspension.”

On our rig, we had an Old Man Emu BP-51 High-Performance Suspension system with single bypass shocks, which ate up trails like a champ and let the truck take on-road corners at speed without an issue. OK4WD swapped the stock upper control arms on the Tacoma with SPC Industries adjustable control arms to allow for the bigger BF Goodrich KO2 All-Terrian tires. The truck was also lifted 2.5 inches. Because of the added weight of the canopy camper and accessories, Oostdyk’s team installed heavy-duty rear springs and upgraded Powerbrakes—which are usually used in rally trucks. They also changed the gearing to 4.88 to help move the bigger tires and improve fuel mileage.

The tires were mounted on AEV Crestone wheels which have an optional beadlock. We didn’t use the beadlock attachment, but when used, it allows the tires to be aired down to single-digit pressures. This gives them more grip in loose terrain and over large obstacles. OK4WD installed an ARB air compressor under the hood to air tires back up to highway pressures or fill a flat. They also installed an air-locker in the front and rear differentials. When engaged, air lockers disengage the limited-slip differential and force all four tires to move. We used this feature once to clear a tree stump, and it felt like the truck was being pulled on a winch. In case we got stuck in a situation the lockers couldn’t get us out of, we had a set of MAXTRAX traction boards, a winch, and a recovery kit.

To defend against branches, rocks, or critters on the highway, our Tacoma had a steel ARB bumper with fender guards and rocker guards that bolt to the frame. The bumper also protects and houses a remote-control Warn winch, fog lights, and two ARB SOLIS High-Intensity lights. And to keep the undercarriage free of vegetation or other nasties on the trail, OK4WD installed a skid plate.

The Best Truck Upgrades For Hunters

For our trip, we wanted to find a truck that was capable of just about anything, but depending on how you hunt and the places you want to go, there are options that won’t break the bank. Still, some big-ticket upgrades that we feel are worthwhile for hunters to invest in are the Alu-Cab awning we used, the refrigerator/freezer, the suspension, and the tires.

However, inexpensive upgrades to your vehicle will go a long way in the backcountry. “It is all based on your needs and what you do,” Oostdyk says. “Some people think they have to spend 50-grand and buy everything to go overlanding. You don’t. You can start very inexpensively and work your way into it as you develop your love for where you want that vehicle to go and what you want it to do.”

Read Next: 7 Tips for Driving That Off-Roading Rig You Just Bought

An easy upgrade for any off-road truck is recovery gear or a kit that will help your rig back on the trail if it gets stuck. This can include gear like a tow strap, soft shackles, a plug kit for your tires, a small air compressor, a shovel, and some traction boards. “Good recovery gear is worth its weight in gold when you need it,” Oostdyk says.

Upgrades aside, good driving also goes a long way. Any four-wheel-drive training will help you go farther in the field with your vehicle. Before our trip, I took a two-day course offered by Northeast Off-Road Adventures, and there were a few times (for the most part in Colorado), I was very happy I did. It’s surprising what these vehicles are capable of especially when you know how to drive one.