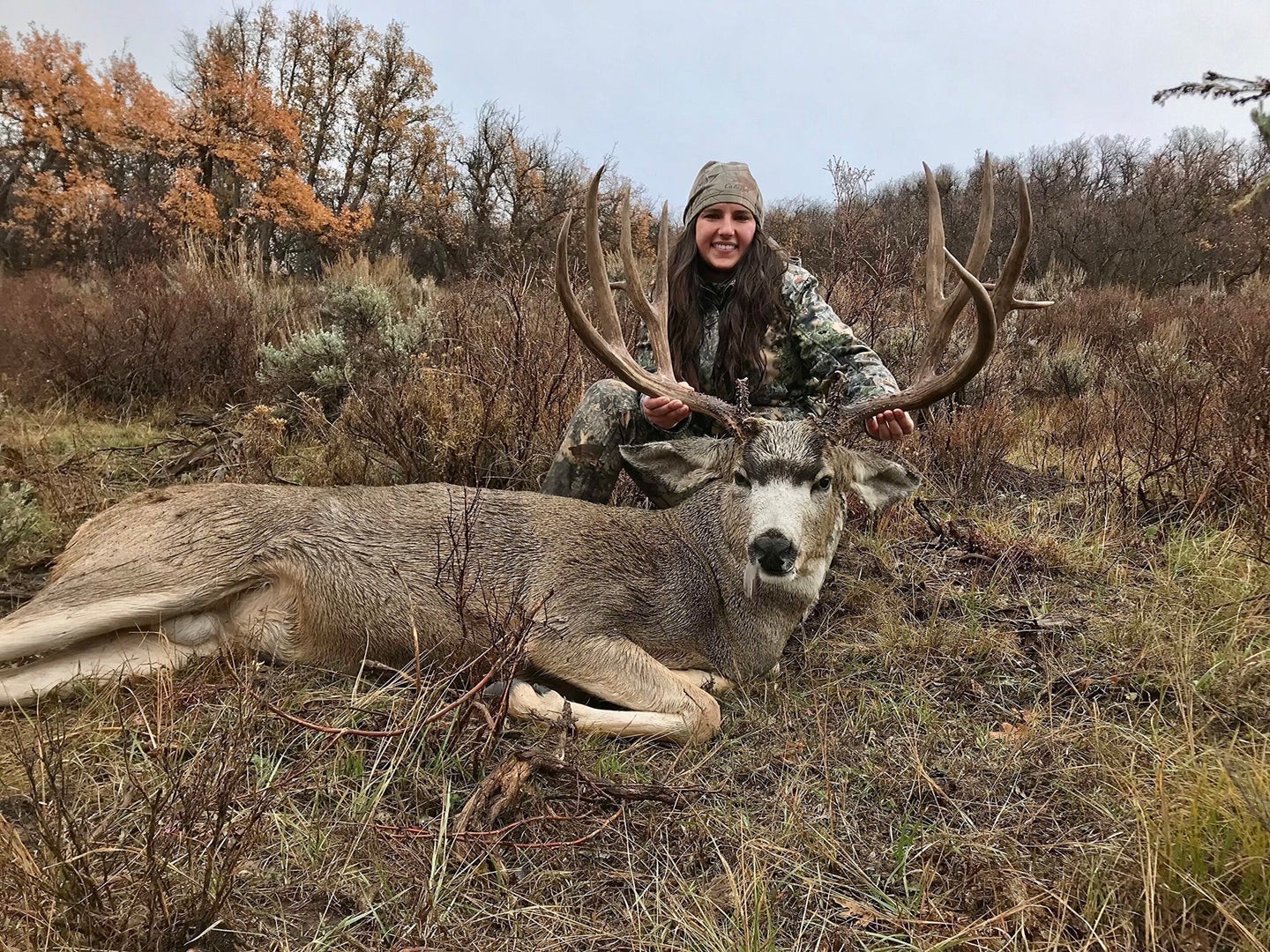 McKaylie Richins has been a passionate hunter for as long as she can remember—and it paid off for the 24-year old this fall when she tagged a main-frame 5X5 muley that grossed 226 inches at her family’s ranch in Utah. “Opening day of the Utah general deer hunt has always been a big day for the Richins family,” she tells F&S. “Normally, the men go hunting and the women go shopping, but for me and my sister, hunting has always been more appealing. This year, I was the only one in our family who drew a general deer tag, so my dad Jeff, my brother Quaide, my sister Bailie and her husband Brayden, as well as their two kids Birklie and Breckelle, all tagged along to help me find a buck. It was kind of ironic because just the year before, I had been the only one who didn’t draw a tag.”

Opening day came on October 23, 2021. It was a warm, rainy morning as the Richins crew searched hard for a buck. “At the start of the hunt, we were spotting a lot of elk, but my dad, brother, and I were determined and kept walking all morning,” Richins says. “At noon, just when it looked like we weren’t going to find a decent buck that day, we spotted this buck feeding in the rain. As soon as he lifted his head, we knew he was big. When the buck trotted up the hill into some oak brush, my brother and I ran up to where I could get a clear shot. It felt like it was meant to be. The buck walked out of the oak brush and stood at about 100 yards. My dad and brother talked me through the shot as I steadied my Savage 7mm-08 and dropped the buck with one shot.”

When the muley went down, Richins put the rifle on safe, strapped the sling over her shoulder, and started moving quickly towards her kill. “Suddenly, I slipped and fell and knew I had definitely torn something in my knee,” she recalled. “My dad came over and told me not to move, then told my brother to go over and make sure the buck was dead. Suddenly, my brother was whooping and hollering in excitement.”

Richins eventually made her way to the downed buck and was soon joined by the rest of the family. “We were all shocked at how big he was,” she says. “After we got some photos, my dad, brother, and brother-in-law worked on [field dressing] the deer, while my sister helped me get off the hill.”

The Neighboring Landowner Had a History with the Big Buck

Once word about Richins’ buck spread, the neighboring landowner, Terry Diston, paid a visit to the Richins ranch. “As it turned out, he knew the buck well. It would travel back and forth between our ranches,” Richins says. “Terry also had three years worth of sheds from him and had nicknamed him ‘The New Year’s Buck’ because he would find the buck’s antlers lying on the snow not long after New Year’s Day each year. It was really cool to see how the buck had changed over the years. He had definitely reached his prime, as his front teeth were missing and his other teeth were worn down. So he was an old buck, and I am glad to have harvested him when I did.”

Richins had the buck scored at Summit Taxidermy Coalville, Utah. “The owner Stephen Woolstenhulme gave him a rough gross score of 226 inches,” Richins says. “The buck had a 32-inch spread, great tine length, deep forks, and several points coming off the bases, as well as a drop tine off the main beam. He was just a big-bodied, typical buck with lots of trash. I guess I knew it was a monster buck, but never in a million years did I think it would get the attention it did. Several people said it was probably one of the biggest bucks taken in Utah this year, and it’s especially one of the biggest taken by a girl.”

And the knee injury that Richins incurred while rushing to see her trophy? It almost prevented Richins, who’s a rodeo participant and was Miss Rodeo Utah 2019, from riding at a big event. “I was scheduled to carry sponsor flags at the National Finals Rodeo in Las Vegas, so I was in kind of a time crunch,” she says. “After an MRI, I learned I had a complete tear of my ACL and an MCL sprain. It would require surgery. Well, I just wore a brace while riding the horse for the rodeo and had the surgery afterward. It was definitely worth getting hurt for a buck of a lifetime like that, and I can’t thank my family enough for their help and kind words.”