Served alongside a killer plum sauce, this crowd-pleaser makes for a perfect Super Bowl snack 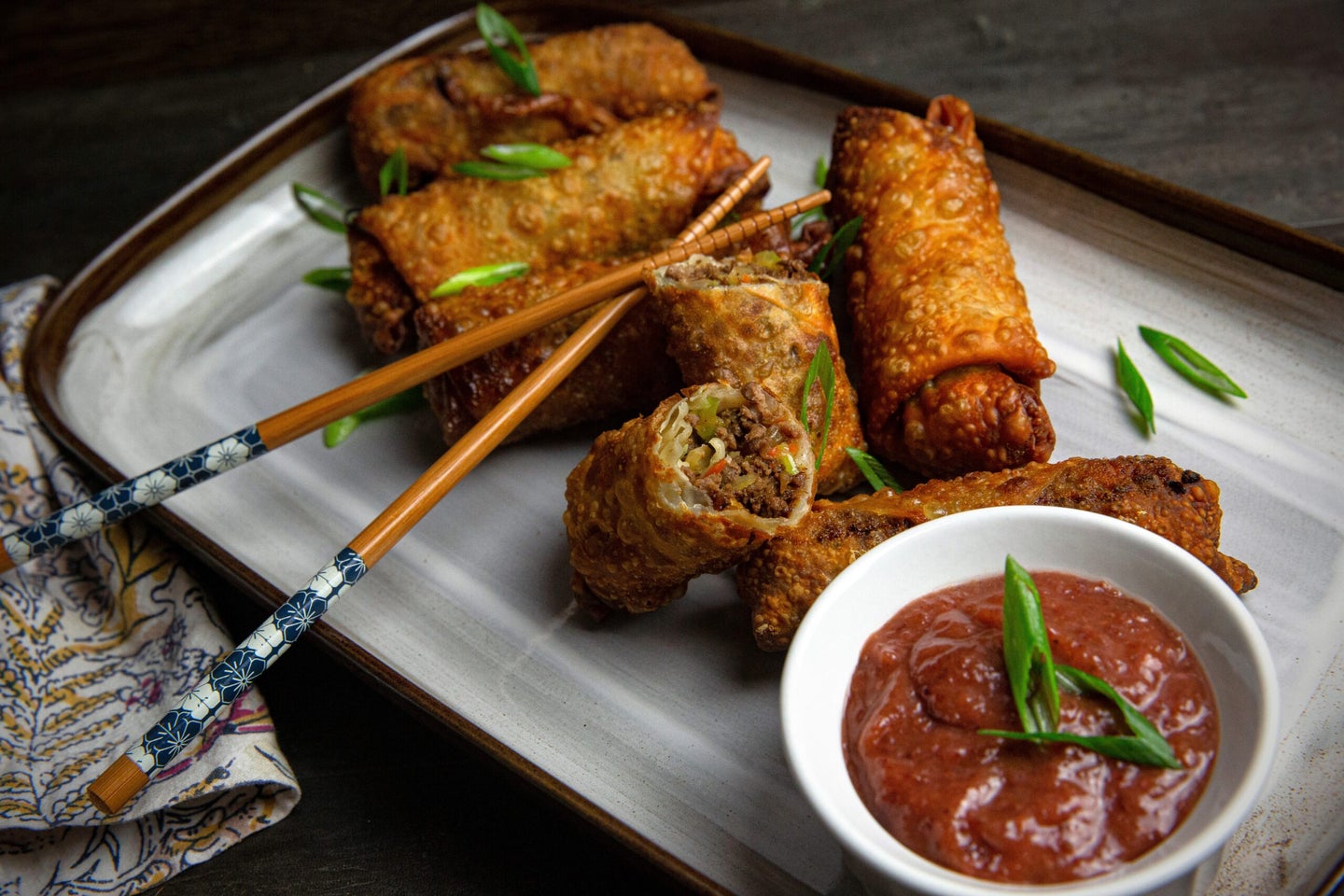 Egg rolls are a great, and delicious, option for all of the ground venison in your freezer. Jack Hennessy
SHARE

A good egg roll is the hallmark of any Chinese takeout joint, in my opinion. Though it’s my understanding egg rolls are more of an American thing—a Western spin on the spring roll. On the topic of spring rolls, please know they are not the same thing. This is important when picking out wrappers, as you specifically want egg-roll wrappers for both their size and how their exterior bubbles up when frying.

Shredded cabbage is a key ingredient in any egg roll. You can shred your own cabbage and carrots, or you can go for the pre-packaged coleslaw mix, which I did here. There isn’t a big difference other than the time and mess you’ll save yourself.

This plum sauce is pretty simple and involves canned whole plums, because at the time of this writing, plums weren’t in season. Make sure to remove the pits so you aren’t sending those through your food processor or blender. I made that mistake, and it sounded like grinding rocks. Five spice powder is a blend of cinnamon, fennel, cloves, star anise, and white pepper. If you can’t find at your local grocer, you can purchase it online.

This entire recipe—even the process of rolling and frying the egg rolls—is simpler than you might except. Kids and, I’d suspect, even those with a preconceived aversion to venison will gobble these up.

For the plum sauce

For the egg rolls

Make the plum sauce: Over medium heat, add a thin layer of peanut oil in a medium-size saucepan. Add the minced onion and lightly salt and pepper. Cook the onions, stirring often to keep from burning them. When the onions are slightly soft, add the garlic and ginger, and stir for a couple more minutes. Deglaze the pan with the apple cider vinegar. Stir for couple minutes more, then turn off the heat. Pour the mixture in the saucepan into a food processor or blender. Add the plums, soy sauce, five spice powder, and salt, and blend thoroughly. Pour the sauce into a bowl, cover and refrigerate.

Make the egg roll filling: Place a large skillet (preferably cast iron) over medium heat. Add a thin layer of peanut oil along with the yellow onion. Season lightly with salt and pepper, and cook until the onions are slightly soft. Add the venison and lightly season with salt and pepper. Brown then, venison thoroughly then add the garlic. Cook the for few more minutes, stirring regularly, then add the fish sauce, Mirin, and a drop of sesame oil (a little goes a long way here). Cook for a few more minutes before adding the coleslaw mix. Reduce the heat to medium-low and cook until the shredded cabbage and carrots have softened. Turn off the heat.

In a Dutch oven or deep fryer, add a few inches of peanut oil and heat to 400 degrees. Meanwhile, make a cornstarch slurry by adding the 2 tablespoons of cornstarch to a bowl and drizzle just enough cold water from the tap to create a thin paste while stirring the mixture with your finger.

Prep the egg rolls: Lay out an egg roll wrapper so that one corner points toward you. Add the filling in the middle of the wrapper. You want enough for a beefy egg roll—but not so much that it can’t fit inside the wrapper. Next, carefully bring up the corner pointing toward you, and tightly wrap it over the filling. Fold the two side corners over on top of the first wrap you just made. At this point, apply some of the cornstarch slurry to the inside of the far corner of the wrapper (this helps seal the egg roll), then finish rolling the wrapper. (Note: With a 1-pound package of wrappers, you’ll have plenty of extras, so don’t worry if you break a few at first. Take your time with first couple until you get the hang of it.)

Fry the egg rolls two at a time so as not to crowd the fryer. Rotate until all sides are golden brown. Remove and set on a wire rack set over a baking sheet to drain the oil. Cook the remaining egg rolls. Garnish with scallions or sesame seeds, and serve alongside the plum sauce. Makes at least 10 egg rolls