The Season: Walking in the Dark

The true beginning to a deer hunt begins with the walk to the stand, in the pitch black 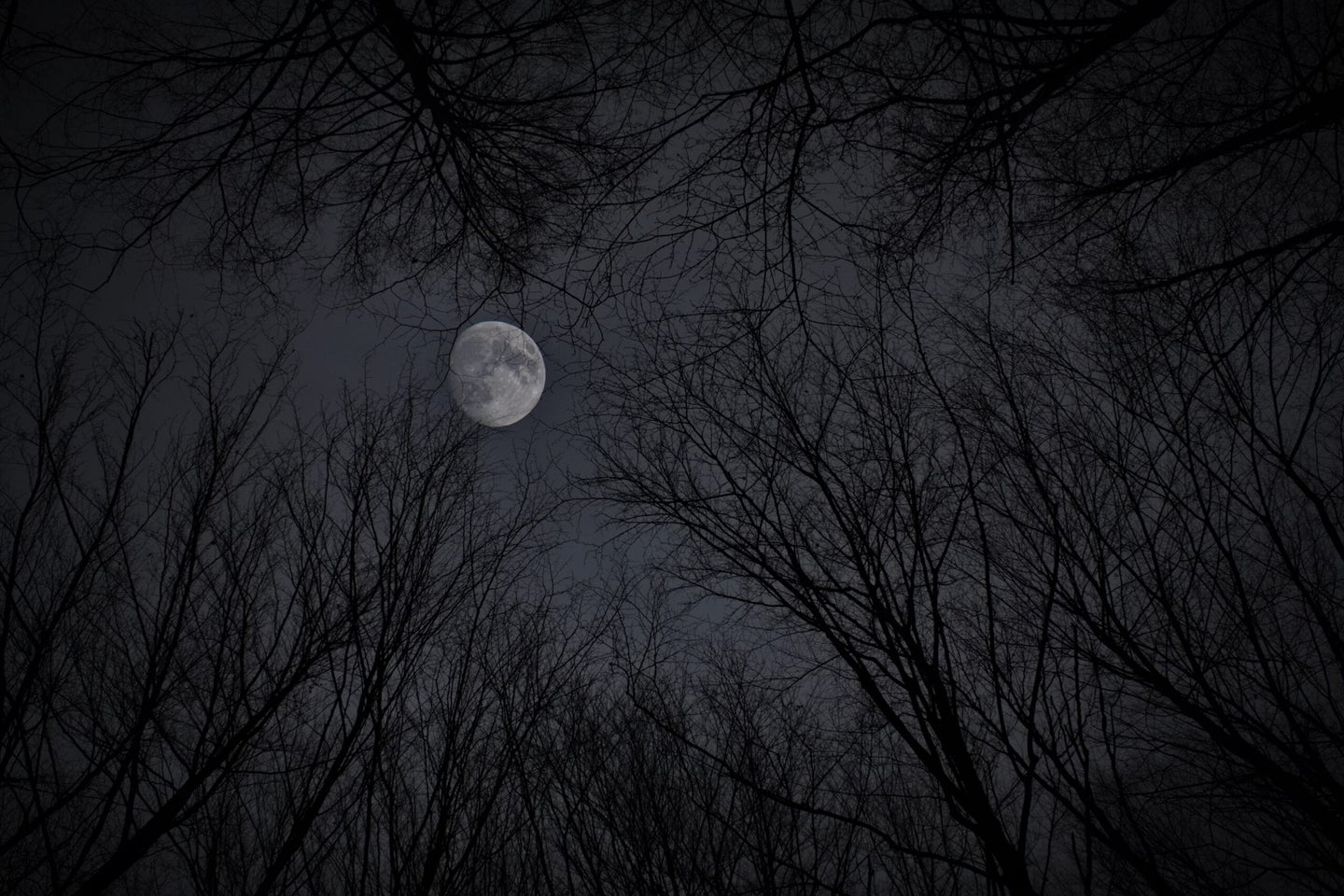 “The Season” is a new online column from F&S editor-at-large T. Edward Nickens. You can also follow Nickens’ adventures on Instagram @enickens. And you can read about his adventures in his newest book, The Last Wild Road, an anthology of his best F&S stories. Order it here or wherever books are sold.

I follow my own moon shadow, crossing the field as it leans down toward the woods’ line. This is one of my favorite aspects of a morning deer hunt—walking in through the pitch black dark. I almost always try to do it without a light. There’s a sense of immersion in the landscape as you move through the dark. I can’t deny that I feel a sort of kinship with hunters of yore. With a flashlight or headlamp lighting the way, I feel like I’m tunneling through some artificial fissure in the landscape. I’m blinded, literally, by the hard walls of a light beam. It feels oddly constraining. And it puts every deer on alert for a half-square mile.

So I walk in the dark. With my vision dimmed, all other senses are sharpened. I hear the hiss of my boots moving through the shin-deep grass. I smell the decaying leaves. I feel a warm draft spooling down a gully. I feel connected. Henry David Thoreau loved a good night hike, too, and like me, he was intent to “make acquaintance with another side of Nature.” The dark side, but not one without its own sort of illumination.

At the bottom of the field, I take a break. Unlatching the gate without a light is tricky, but I also want to give my eyes the chance to catch up. The longer I go without a light, the better I’ll see in the dark. Scattered along the retina are light-gathering rod cells, which produce a protein called rhodopsin, a.k.a. “visual purple,” that supports low-light vision. Light bleaches out the rhodopsin, which then takes about a half-hour to fully recharge. Humans aren’t equipped with a tapetum lucidum—an extra layer of reflective cells behind the retina that reflects incoming light back through the eye for a double dose of low-light absorption. Instead, we have to hoard and protect our rhodopsin like a thirsty traveler rations water. Look away from the moon and the lights of distant houses. Kill the dome light in the truck. From this gate to the creek-bottom ladder stand, I’m in the woods, following a farm path through a mosaic of big oaks and dark pines. Even a brief blast of light from a headlamp will trash rhodopsin and set my visual dark adaptation back to zero.

In the woods now, I lose the horizon, the distant lights of houses, the stars overhead. The world is rendered purely in grayscale. Night vision is largely achromatic—we barely see color, if at all. But in the dark November woods it’s striking how many shades and hues are visible, the forest floor kaleidoscopic with dark oak leaves and light beech leaves and maple leaves brighter still.

I round a bend in the path and my heart quickens. The dark outline of a cedar bush up ahead always makes me nervous. It’s shaped precisely like a chainsaw murderer—or at least how I imagine a chainsaw murderer to be shaped—and it gives me the willies even though I’ve walked past it a half dozen times already this season. I shoulder past the dark shape with a quicker pace, and chide myself for such a childish fear. Chainsaw murderers typically hang out in more populated places. I should know better, but the woods at night makes it tough to stymie such crazy ideas.

At the top of a pine ridge I hold up for a moment, and unzip my shirt to offload some body heat. I don’t want to break a sweat, not this close to the ladder stand, so I lean against a tree to still my heart rate and let the woods forget my passage. From here on in I’ll move ever more slowly, feel the ground with the balls of my feet, stalking the stand to flatten those invisible ripples created whenever a hunter moves through the woods. There’s the faintest glow in the east. Shooting light is still 20 minutes away.

I pick up the ladder stand’s silhouette, all straight lines and right angles against the tangle of the woods, and stop at the tree to tie the rifle to the pull-up rope. I grab the ladder sides in my hands, careful to keep my wedding ring from clinking on the exposed metal, and take the first step up, alone in the dark, not quite ready to leave the ground and rise above it all.