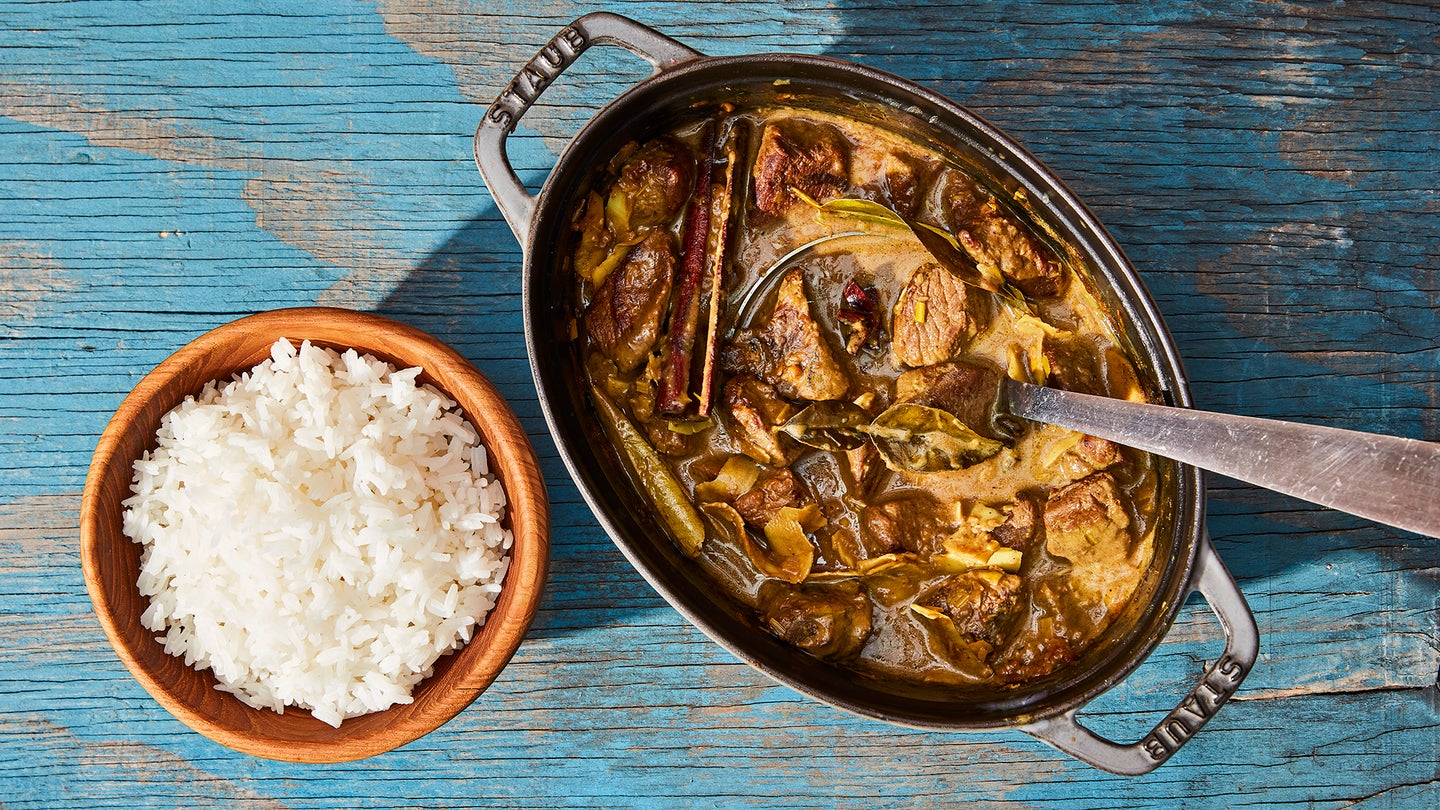 Originally used as a delicious way to preserve meat for weeks, rendang is now all about intense flavor. Christopher Testani; food and prop styling by Roscoe Betsill

How to Make Venison Rendang

LIKE A LOT of familiar favorites (jerky, salt cod, corned beef, smoked trout), Indonesia’s rendang is the result of a preservation tactic. Cooks in the 16th century found that slow-cooking beef smothered in an intense paste of ginger, garlic, lemongrass, chiles, and coconut resulted in meat that would last for weeks, even in the tropical heat. As with other preserved fare, we don’t turn to rendang nowadays for its functionality, but instead for its flavor. Which is, yes, intense, in all the right ways: savory, spicy, nutty, garlicky, citrusy. Our version omits traditional galangal, fresh turmeric, and a few other hard-to-find ingredients, but otherwise cranks up the flavor quotient with venison in place of beef. Because this is a long, slow braise, and because of the potent seasonings, rendang is a great way to tame the tang and texture of a bull elk or moose or even a chewy wild boar. A couple of notes: Make sure not to use low-fat or “light” coconut milk; wild game needs all the fat it can get. Also, this recipe makes for a medium-spicy dish; use up to three fresh or 12 dried chiles if you want some tongue singe.

1. Make the spice paste: In a food processor, combine the habanero or dried chiles, onion, garlic, ginger, turmeric, chopped lemongrass, and 2 tablespoons of oil. Blend until you have a smoothish purée, adding a few tablespoons of water if needed to keep things flowing.

2. In a Dutch oven or large pot, heat the remaining 2 tablespoons of oil over medium-high heat. Add about half the venison, taking care not to crowd the pan, and brown the meat, turning frequently, until richly colored. Remove to a plate. Repeat with the remaining venison.

3. Reduce the heat to medium and add the spice paste, using a spatula to scrape up any brown bits. Cook, stirring almost constantly, until the spice paste is seething and thickening, about 2 minutes.

4. Return the venison to the pot along with the coconut milk. Then add the sugar, bay leaves, smashed lemongrass, lime leaves and tamarind (if using), lime zest and juice, star anise, cinnamon stick, and coconut. Bring the mixture to a boil, then reduce the heat to very low and simmer, covered, for about 1½ hours, or until the venison is tender but not falling apart. Stir it every now and then to make sure the meat isn’t sticking.

5. Remove the lid and fish out the lemongrass stalk, bay leaves, cinnamon stick, and star anise. Raise the heat to medium-low and continue to cook, stirring gently on occasion, for about 30 minutes, or until the sauce has darkened and is thickly coating the venison. Season generously with salt and pepper and serve over hot steamed rice. Serves 6