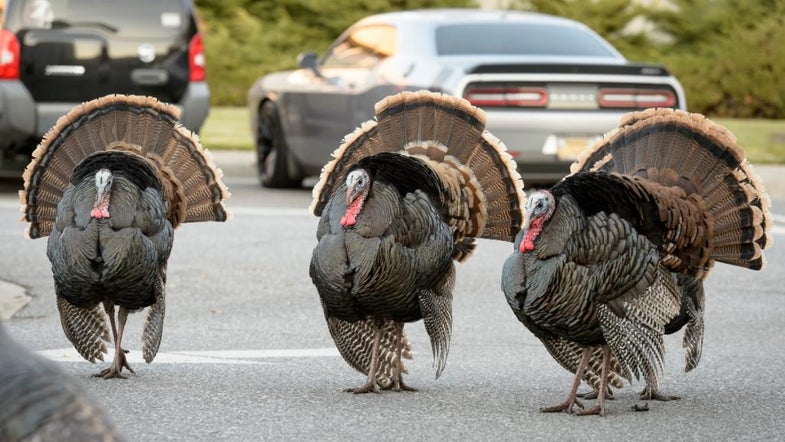 It’s that time of year again. Postal workers, delivery people, and, yes, even workers at NASA are being harassed and attacked by wild turkeys. Recently, a local flock of wild birds at the NASA Ames Research Center in Mountain View, California, caused traffic havoc and great consternation among employees when the turkeys began to get overly aggressive by pecking on car doors and windows.

“Male turkeys, during mating season can be a little bit aggressive,” said Ken Paglia with the California Department of Fish and Wildlife. “They can kind of charge after people sometimes.” Paglia says that NASA and the U.S. Department of Agriculture are working to catch the birds alive and relocate them onto the 3,000-acre San Antonio Valley Ecological Reserve.

“There’s already a small population of turkeys there,” Paglia said about the reserve. “It’s a suitable habitat. There are food sources, there are water sources. So, if everything goes according to plan, those turkeys will be relocated to the ecological reserve.”

The primary reason behind what will surely be a spate of wild turkey “attacks” that are forthcoming is pecking order, or the battle for social dominance within a particular flock, which happens in both spring and fall.

“The turkey is many things to many people,” says Matthew L. Miller in Cool Green Science.  “And now, it frequently makes the news as a local danger. Why is this shy forest bird suddenly running down motorcyclists? Our recent tangled relationship with wild turkeys may hold some answers. Turkeys also quickly learn where they can avoid hunters. And few places are better for safety than suburbs. Many suburban areas are a nice mix of habitats, with trees, vacant lots, parks, and yards providing plenty of foraging space for an adaptable bird like the turkey. They commandeer bird feeders and backyard gardens. And they lose their fear of people.”

So, just how aggressive can wild turkeys be? Take a look at the video below and see for yourself.