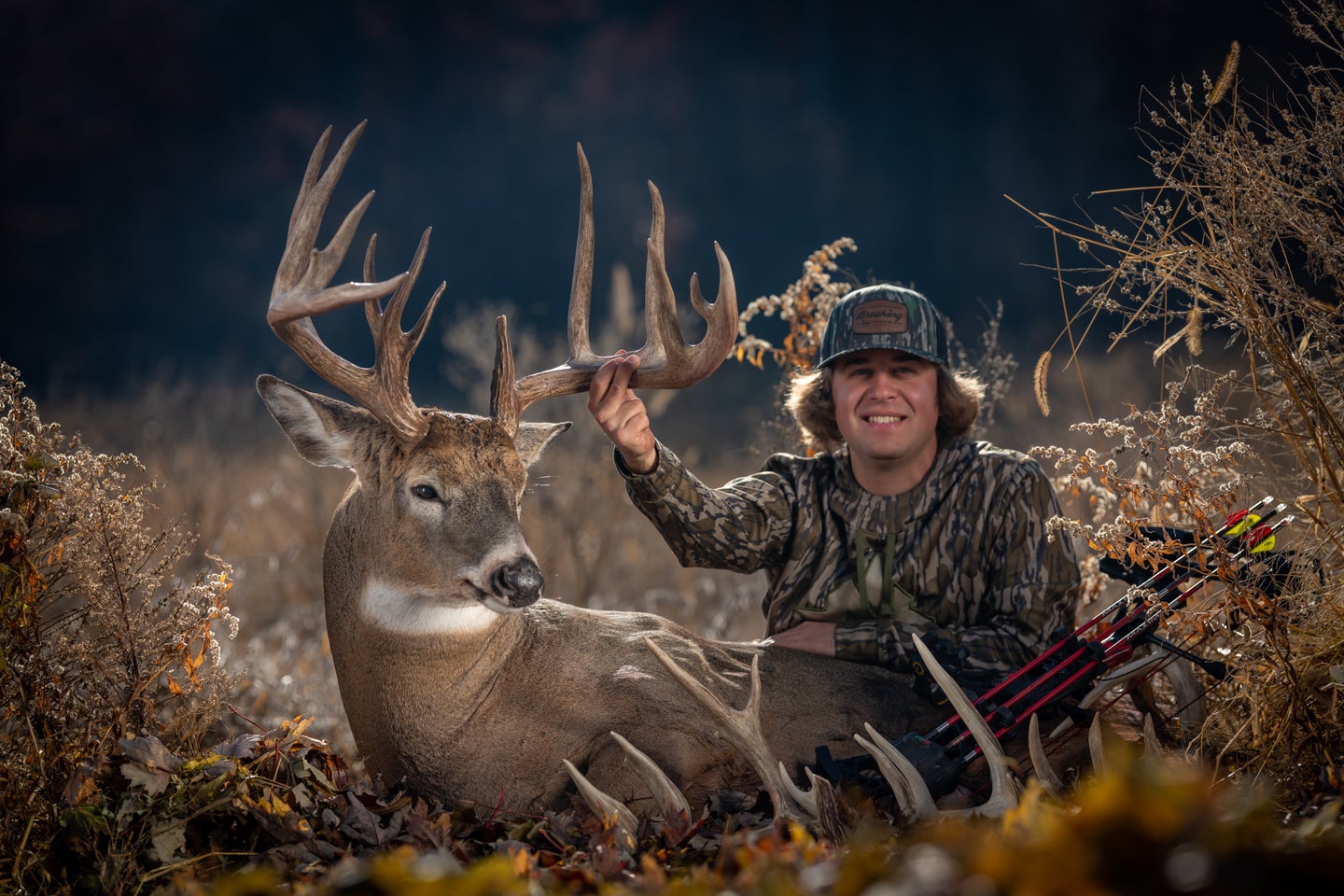 Stamm poses with his buck, and with the deer's sheds from previous years. Mitchell Stamm
SHARE

Mitchell Stamm, 26, just arrowed the buck of a lifetime—a massive whitetail that grosses over 190 inches. Stamm had some history with the buck, which he tagged while hunting on an 80-acre chunk of private land in Eau Claire County, Wisconsin. His father, who bought the property last winter, found the big buck’s sheds for each of the past two years. The property manager had found the buck’s sheds the year before that, when it was just a 2-year-old. But Stamm, an avid bowhunter, hadn’t set eyes on it until this fall.

“The first time I saw him was on September 22. He came up and worked his way into about 65 yards and was munching on clover the whole time,” Stamm tells F&S. “All of a sudden, a bunch of does filtered into the food plot. Ten minutes later a doe caught my thermal and blew, clearing the whole field.”

But thankfully, that wasn’t the last time he saw the bruiser. “A month later, I was sitting over a small pond, and he came in after dark and snuck around me for 20 minutes, eventually working his way into 15 yards and drinking from the pond as I waited for Johnny, the guy who lives there, to pick me up in his truck.”

Then, on October 30, it all came together during shooting hours. That morning, Stamm and his father checked trail cams and refilled the push-up pond, where he’d recently seen the buck drinking. Stamm, who is a freelance videographer and photographer, was planning on taking the evening off from hunting to get some work done. “All of a sudden, I got a picture of a doe from my cell camera. Right behind her was that buck. I got out from behind my computer and nearly jogged out to the tree stand,” he says. “About an hour later, I looked up and saw him, the doe, and the doe’s fawn—a nubbin buck. He was right behind her, walking as slow as can be—the slowest I’ve ever seen a deer walk. He was just staying behind that doe, never losing sight of her.”

“The nubbin buck eventually worked its way down to the pond and was drinking from it. The doe eventually worked down, too, but was out of shooting range. Luckily, the buck came right between the doe and the nubbin buck and worked his way to about 35 to 40 yards from me. I had one little window to shoot, and luckily I made a good shot. He did a 180, turned around, nose-dived right into the ground, and then ran maybe 30 yards before going down.”

Read Next: The Biggest B&C Nontypical Record Bucks From Every State

Stamm says the first time he’d seen the buck in the field he’d gotten buck fever so badly he doubts he would have been able to kill it. “But this time, something just took hold of me, and I was more concentrated when he was coming down the trail just looking for a good shooting lane,” he says. “All I was thinking was Make a good shot on him, and hopefully, he doesn’t go far.”

After arrowing the buck, he called his dad, brother, and the property manager, Johnny. They met Stamm at the tree stand and walked up to the downed buck together. It was a whopper; Shane Indrebo green scored the deer, and it grossed 192 5/8 inches. “Walking up on the buck was a pretty surreal moment—probably one of the best moments of my life,” says Stamm, who plans to share a full video of the hunt on his YouTube account. “My dad and I are a one-two punch when it comes to hunting. We just love doing this kind of stuff together, and it means the world to me that he was there.”