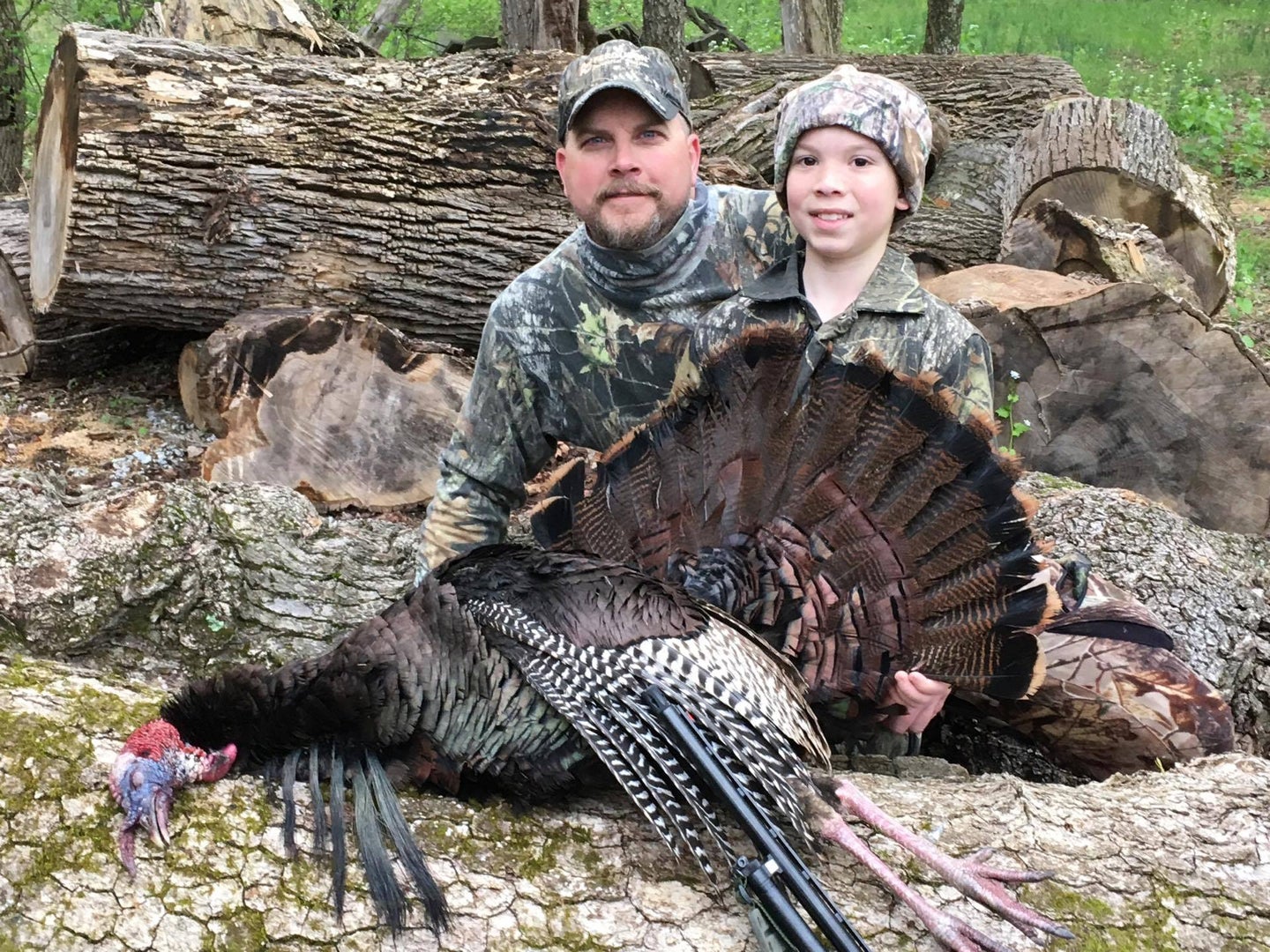 Tyler Blake Mumpower and his dad, Rodney, show off a turkey with 13 beards. Rodney B Mumpower
SHARE

Every turkey is a trophy, of course, but some are more unusual trophies than others. As this season comes to a close, some of the birds hunters put tags on had more beards or longer beards or spurs. Some were heavyweights, and some combined beards, spurs, and weight to score high on the National Wild Turkey Federation scoring system.

The NWTF keeps the record book on turkeys. With their help, we’ve compiled a list of some of the most incredible wild turkey records, including the longest beard, most beards, longest spurs, greatest weight, and highest overall scores of all time. And, if you’ve tagged an exceptional bird this spring, submit your record through nwtf.org.

1. NWTF World Record for Turkey with the Most Beards

Some turkeys have multiple papillae and can grow more than one beard. It’s an uncommon, random occurrence that conveys no advantage to the birds, but they make a rare trophy for hunters.

At 11 years old, Tyler Blake Mumpower of Pennsylvania, hunting with his father Rodney in Adams County, shot a tom with 13 measurable beards. The longest beard was 10 inches and all 13 beards added up to a combined length of 78.9375 inches. The tom weighed 22 pounds and had a .9735 spur on one leg and a 1-inch spur on the other, making it the third highest-scoring turkey in the NWTF record system.

The Eastern wild turkey is the heaviest of the subspecies, often weighing in excess of 25 pounds. Climate and the availability of food plays into how big a turkey grows, and northern birds from farm country are typically among the largest. But, a big turkey can grow anywhere, Animals in cold climates tend to get bigger than those in warmer climes, but there have been big Easterns recorded from all over.

David Cody Guess of Lyon County, Kentucky, already had a huge 28-pound bird to his credit, when he killed a much bigger bird in 2015 on his family farm. The gobbler weighed an astonishing 37.6 pounds, and is the heaviest ever recorded.

3. NWTF World Record for Turkey with the Longest Beard

Turkey beards neither hang from the bird’s chin nor are they made of hair, but “beards” is the term we use anyway. A beard is a mesofiloplume and may very well have much in common with the tufts of hairlike bristle found on some dinosaur fossils.

Beards never molt nor stop growing, but the tips wear, limiting their length. Eastern wild turkeys generally have the longest beards but long beards are found among all the subspecies. A beard grows out of a skin spot on the breast called a papilla. Both male and female turkeys have papillae, but only about 10 per cent of hens grow beards, and most are quite thin.

In his second year of turkey hunting near his home in New Boston, Texas, Cody May shot an eastern tom with a beard whose longest strands measured 22.5 inches at the check station. By the time he had the brittle beard measured again, it had broken off to 17.5 inches, which would have fallen short of the then-current record of 18.125, shot in Virginia in 1998.  However, the original measurement counted as official, giving May the new top spot.

4. NWTF World Record for Turkey with the Longest Spurs

For a lot of hunters, spurs are the real measure of a trophy tom. A wild turkey’s spurs are made of keratin, the same substance that makes up our hair and fingernails. Spurs grow longer and sharper with age, and toms use them as weapons as they fight for dominance. Osceolas are known for their long spurs, which is due in part to the fact that they live in an environment of soft and sandy soils that won’t wear or break off spurs. Incidentally, while most turkeys have two spurs, a very few mature birds have none, while some have multiple spurs. There are 15 birds registered with the NWTF records system that have six spurs apiece.

The longest spurs on record belonged to a tom taken in 2017 by Willard Dills of North Carolina, who was hunting around Cartoogechaye Township in the western part of the state. The spurs measured 2.5625 inches.

The NWTF has maintained records since 1982, using a scoring formula that combines weight plus two times beard length plus 10 times combined spur length. The system gives less weight to size due to regional differences in turkey weights.  Justin Lucas of Georgia killed the all-time record bird in 2014 in Candler, Georgia. The bird had 10 beards, the longest of which measured 10.5 inches. The spurs match at 1.1875 inches, and the tom weighed 19.0625 pounds.

Lee Blackmon of York, S.C., killed the highest scoring archery turkey in 2016 with a broadhead through the neck. It was only his fourth turkey and the third he’d killed with a bow. The tom had seven beards. The longest was 11.75 inches, the shortest measured 6.375, and the turkey weighed 20.4 pounds and had 1.625 inch spurs. At the time the bird was taken it ranked 18th out of all records, and was the only archery bird that scored in the top 50 nationwide.