Introduction to the Pig Pull

Get your Southern fixin's ready for a pig pull 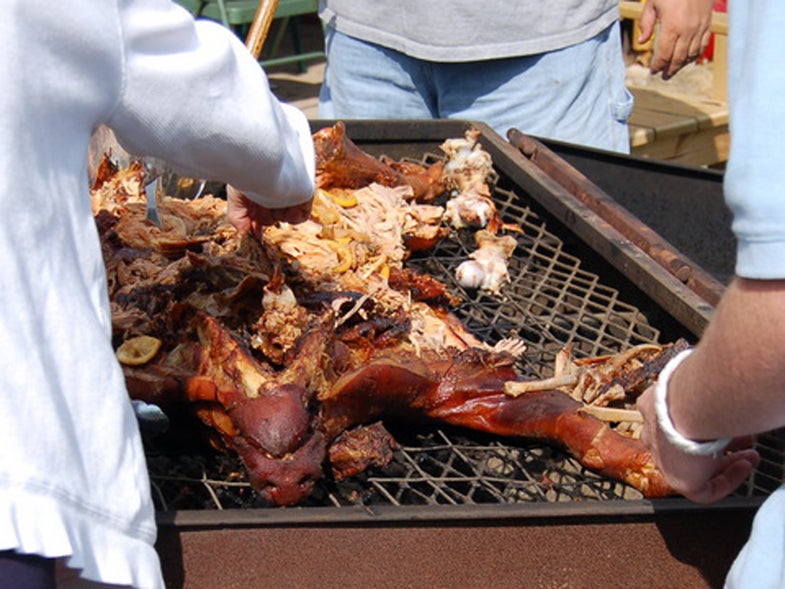 A friend of mine who is a very good trout fisherman, a formidable cook, and a sometime poet, sent me a couple of odes to swine that he had composed. I, having no poetry in my soul, sent him this description of a pig pull, a cultural and culinary experience that is without equal in the western world. I thought you might be interested as well.

A pig pull is a form of gluttony practiced in the Deep South. It’s suitable for anywhere from half a dozen to 50 people.

First, kill the pig. You need an adult swine for this, and adult swine are quite intelligent, so when the designated shooter walks up to the sty with a rifle, the piggy knows exactly what is about to happen. Watching this took some of the fun out of the event for me, and even more out of it for the hog.

Scald the pig and scrape it. Leave the skin on.

Gut it, and save the liver.

Build a grill out of chunks of railroad track or whatever scrap iron you have in the backyard. You need something about 8 feet square. Build a hardwood fire underneath it (hickory, ash, or oak) and let it burn down to coals.

Put the pig on the grill and cook at a low heat for about 12 hours, basting frequently with a mixture of water and lemon juice. This keeps the meat from drying out, and carries off a considerable amount of fat.

When the skin is crisp enough to break (They call it cracklin’) and the meat falls apart, the pig is done. Put it on a board covered with aluminum foil.

Barbecue sauce is vital. No one agrees about it, except that no decent host should serve commercial sauce. There’s bitter division about ketchup-based versus mustard-based, with vinegar. I’m a mustard/vinegar man.

Serve with many, many side dishes. Among those I’ve seen are white rice, dirty rice, rice and beans, navy beans, black eyed peas, corn on the cob— and off the cob, string beans cooked with bacon, okra, either fried or boiled (either way I detest it), poke sallet*, dandelion greens, mashed potatoes, and sweet potatoes. I’ve never seen hush puppies at a pig pull, but there’s no reason they shouldn’t be there.

The liver is chopped up very fine and is called “hash.” It’s the reason that heart surgeons in the Deep South drive Bentleys.

For dessert, jello, rice pudding, chocolate pudding, and all manner of pies.

It’s called a pig pull because the assembled diners literally pull the swine to pieces with their fingers. You stop eating when nothing is left. Then you lie on your back and tell God that if he lets you live, you will never overeat like this again.

My most memorable pig pull was one that celebrated a birthday for the great South Carolina gun builder Kenny Jarrett. About two-thirds of the way through, a canebrake rattler slid into the festivities. South Carolinians being used to this sort of thing, he was immediately stomped to death.

I enjoy seeing a poison serpent turned into a good snake almost as much as I enjoy overeating.

*Poke sallet, not salad, is made from the pokeweed which, in its mature state, is poisonous and will make you very sick or dead. If you pick the stuff when it’s young, and know how to cook it, pokeweed will not kill you. If you get it at a pig pull, it’s bound to be OK.