Is the Snakehead Epidemic Happening All Over Again? 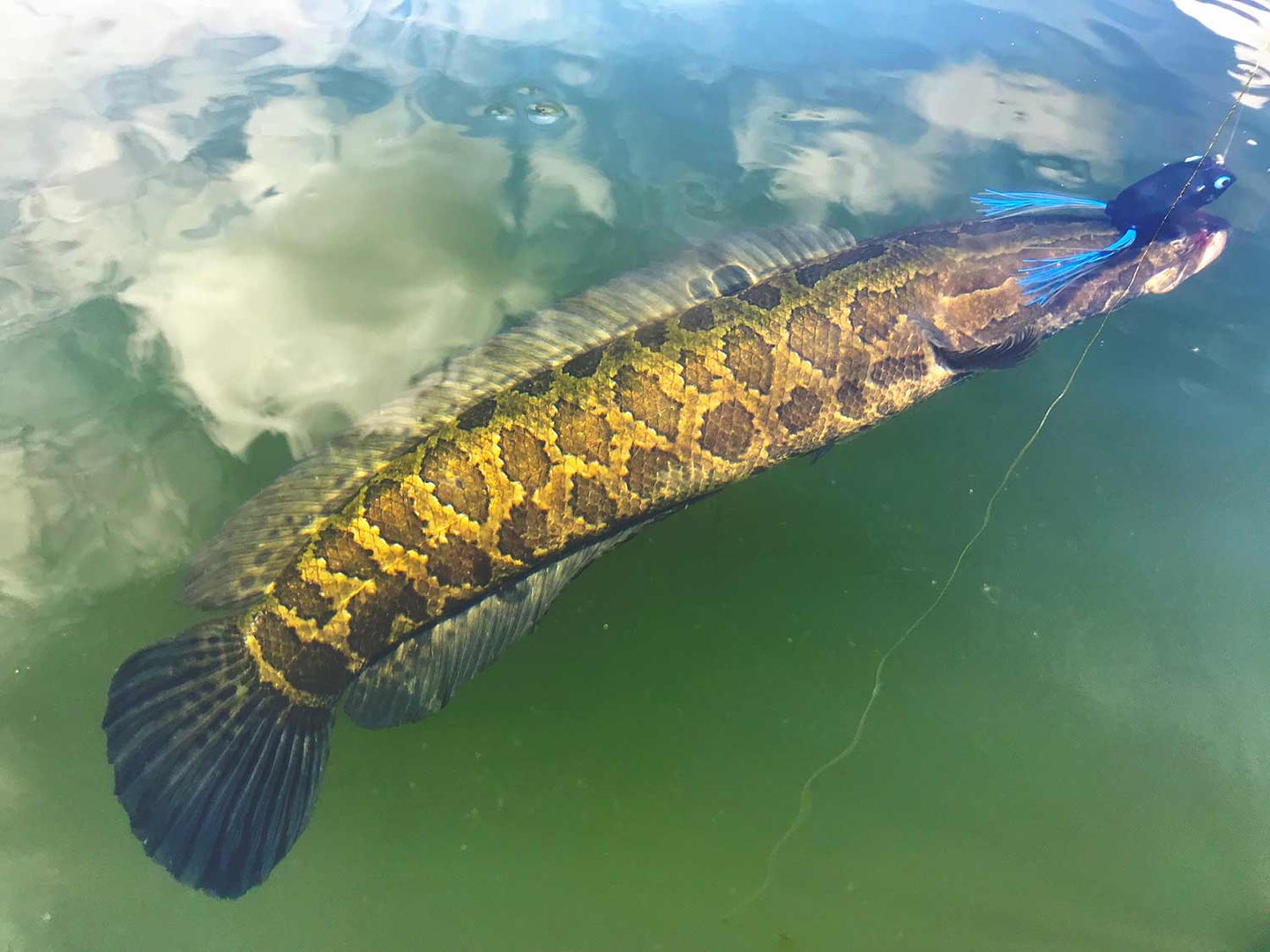 Earlier this month, an angler fishing a pond in Gwinnett County, Georgia, reeled in an invasive northern snakehead. It was the first confirmed catch of the species in the state. Within days, the story was picked up by many news outlets, even receiving ink with heavy-hitters like the New York Times.

All these news reports bear an uncanny resemblance to the ones published nearly 20 years ago when northern snakeheads were first discovered in the Potomac River near Washington, D.C. Terms such as “frankenfish” have resurfaced. The ability of these fish to “crawl on land” is once again being sensationalized. The overriding tone is one of panic.

But to the anglers who live roughly 500 miles northeast of Gwinnett County, this complete rekindling of the snakehead fire in the media probably comes as a surprise. Because not only are snakeheads old news—but many of the fears harped upon with this latest capture in Georgia have had nearly two decades to be assuaged by first-hand angler encounters, as well as scientific research.

How Are Snakeheads Introduced to New Waters?

If you examine any snakehead stronghold, its ground zero can be linked to a metropolis. South Florida’s bullseye snakeheads were introduced just outside of Miami. Northern snakeheads first appeared near Washington, D.C. There are pockets of established snakeheads in Queens, New York. The fish in New Jersey’s Delaware River were likely dumped around Philadelphia. These cities have large Asian populations, and snakeheads are considered a delicacy in their culture. Illegal importation for food is one means of how these fish end up in U.S. waters. The other is the aquarium trade. Juvenile snakeheads were, and still are, popular pets, once readily available in many stores. Possessing and selling snakeheads is now illegal, but there is still a black market that is typically more accessible in cities.

Take a look at Gwinnett County, Georgia, on Google Maps, and you’ll see that it encompasses the suburbs directly northeast of Atlanta—its southern border is mere miles from downtown. The scenario mirrors the origins of every other snakehead establishment in the country.

Who Is to Blame for the Snakehead Invasion?

The real villains in the on-going snakehead saga are the people dumping them—not the fish. I do not hide my addiction to targeting snakeheads with a rod and reel. I’ve written about it several times for Field & Stream, and have shot several episodes of my web series, “Hook Shots,” while on the hunt for northern snakeheads. Not surprisingly, dozens of people tagged me in links to the Georgia story. My inbox flooded. But as much as I love catching snakeheads, I want to make it clear that I do not condone introducing them to new waters where they did not exist. To crack down on the snakehead “epidemic,” more measures must be taken to intercept them before they’re dumped, because the truth is that once these fish are already found in the wild, it’s often too late.

The Georgia snakehead was caught in a private pond (yet there is no mention of law enforcement tracking down the pond’s owner). News reports indicate that the pond drains into a creek that ultimately ends up in “swamp flood plain system.” Considering the milder winters in Georgia, and depending on where that flood plain leads, if even just a few fry made their way out of the pond and survived, the Atlanta area could quickly become the next snakehead stronghold.

Can Snakeheads Travel On Dry Land?

As the media did in the early 2000s, they’re once again playing up a snakehead’s ability to slither across terra firma. It’s true that the fish can do this—yet in all my years targeting them, I’ve never stumbled upon one snakehead out of water, dead or alive.

Snakeheads are not the only species capable of moving over land and surviving for a time out of the water. Native bowfins have this ability; so do American eels. The impression given, however, is that snakeheads are so voracious that they will regularly travel from one body of water to another—and for no particular reason. That’s false. Their ability to travel out of water is a survival mechanism. What might prompt the fish to use this ability is if their home water is drying up or becoming depleted of oxygen or food. Even then, another suitable body of water had better be very, very close; these fish are not wriggling their way down Interstate 95 for 10 miles. And the ground between them and the next body of water had better be soft and moist; they won’t make it very far across a dusty cornfield. Of all the attributes of a snakehead, this one—in my opinion—should be of the least concern.

How Quickly Can Snakeheads Take Over a Body of Water?

What should be more concerning is a snakehead’s ability to spawn multiple times a year and establish a population very quickly. Snakeheads have such a stronghold from Virginia through New Jersey that eradication is essentially impossible at this point, considering the length and breadth of the watersheds they inhabit. Assuming these Georgia fish were only dumped in this one Gwinnett County pond, the state may have a shot at wiping them out if they work quickly. According to the 6abc.com story, Georgia DNR already shocked several other snakeheads out of the pond. What’s not known is if they reproduced in the pond, or were all illegally dumped in the pond at a mature age. Regardless, it’s also worth mentioning that not every confirmed snakehead catch has lead to a population explosion.

Although snakeheads have rooted deeply in Virginia, Florida, Maryland, Delaware, eastern Pennsylvania, and New Jersey, they have been reported in 14 states across the country, ranging as far north as Michigan and as far west as California. In most cases, one or a few are caught in a single body of water and then never seen or caught again, and no large breeding population is ever established. According to South Carolina Division of Natural Resources biologist Dan Rankin, in a recent story on Fox Carolina, there have only been unconfirmed reports of snakeheads in South Carolina. There have been sporadic reports over the years in North Carolina in Lake Wylie (not surprisingly, right outside of Charlotte). Those reports date back as far as 2002. By now, had the fish taken hold, it would be likely that the Charlotte area would have a booming snakehead population on par with those in Washington, D.C. and Philadelphia.

My hope for anglers in Georgia would be that the Gwinnett County capture turns into another one-off incident, but only time will tell. And as it’s very difficult for state officials to sample and shock vast swaths of a watershed, it’s likely that anglers will be the ones doing the telling.