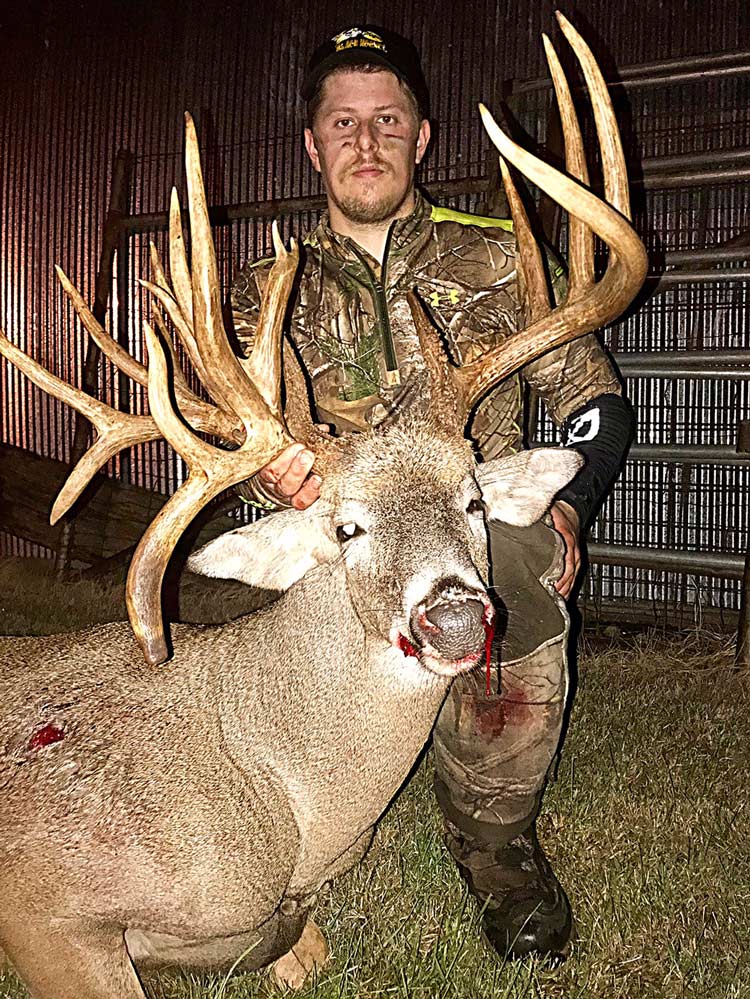 Theis’s giant non-typ will be officially scored in December. Meanwhile, the hunter is ecstatic to have even had a chance—not to mention two chances—at such a buck. Evan Theis
SHARE

Taking a bow buck that breaks the 200-inch mark is one of whitetail hunting’s ultimate challenges. On October 3rd, 25-year-old Kansas archer Evan Theis, an archery department manager at Heartland Outdoor, cleared the hurdle with room to spare, arrowing this incredible non-typical buck that green-scored 222-7/8.

Trail-cam pictures tipped Theis off to the buck about a month before the Kansas archery opener. “I’m pretty sure we had pics of him in 2016,” he says. “Back then, the buck was a main-frame 10-point with a kicker. But when he showed up this fall was something else. His left side was a clean 5-point typical, but his right was a mess. It was kind of hard to tell exactly what was going on there. But there was no doubt he was huge, and I wanted him pretty bad.”

Theis wasn’t the only bowhunter after the giant southern Kansas nontyp. “My family started farming here in the 1960’s,” he explains. “Our farm butts up to a big lake, and a lot of the ground surrounding that lake is a public park that can’t be hunted. The buck was bedding in that park, then moving out to private land to feed in the evening.”

Theis not only knew the other guys who were after the freaky non-typ; they were his friends. “One owns a little piece that the buck was moving through when he left the park,” he says. “The other hunted some of our ground. Even though I wanted the buck, I told my friend that it was fine if he went in there. I told him, ‘I want you to get him if I can’t.’”

When the huge buck left the park to feed, he usually moved north toward Theis’ farm. “I knew I needed a wind with some south in it to hunt him,” he says. On the evening of September 30th, he got that wind, hit the woods, and saw the buck coming toward him just before 7 p.m. “The deer turned broadside at 38 yards,” says Theis. “I shoot a single-pin slider sight, and for some reason I had it dialed in to 50 yards. When I shot, the arrow sailed over the buck’s back. He just ducked his butt and left. I don’t think he even knew what happened. But I did. I was just sick and thought, That’s it, I’m done for the year.

“I didn’t hunt for four days, I was so disgusted,” Theis says. “Finally my girlfriend said, ‘You better get back out there.’ And when we had another south wind on October 3rd, I decided to try again. I had a few does come out early, then a bachelor group appeared—a few small bucks and a 160-inch 10-point. I decided I’d take that 10 if he gave me a shot. Then I looked behind him, and the big one was coming.”

After several agonizing minutes, the massive non-typ fed within bow range. “He finally stood at 21 yards and I drew, got my breathing under control, and took the shot,” Theis says. “l knew I’d shot through the buck but was worried the hit was high. The buck went running back to park, where he felt safe.”

Though he found good blood, Theis was concerned. “I went back to my buddy’s house nearby to tell him the story and calm down. We called the area warden, who called the park manager. He gave me permission to go in there and track him. My good friend Mason Engel (shown) helped me look for the buck, and I just went from the highest of highs to the lowest of lows,” Theis remembers. “We’d find good blood, then it would peter out. Finally I heard Mason say, ‘There he is!’ I can’t even describe the emotion I felt—just a mixture of happiness and relief.”

Theis’ giant whitetail is an odd blend of the perfect and the weird. “His left side was a normal, perfectly clean five-point antler that scored 81 inches,” he says. “So, with his 20-inch spread, he’d have been a 180-inch ten if that other side wasn’t so crazy.”

But that other side is crazy. “It’s like the start of a normal main beam, but then this huge drop tine that just sprouts points everywhere,” Theis explains. “When I skinned him I found a slug from last fall on the left side of his spine. I figured that’s what made the opposite antler grow into a mess.” That side has 19 total points, and 17 of them are at least an inch long.

Though he’ll have to wait until December to officially score the buck, Evan Theis knows his southern Kansas buck is one of many lifetimes. “I don’t expect to ever see, much less shoot, anything like him again,” he laughs. “And I don’t care. I just love to deer hunt, and I was blessed to have a chance to hunt, let alone shoot, a buck like this one.”