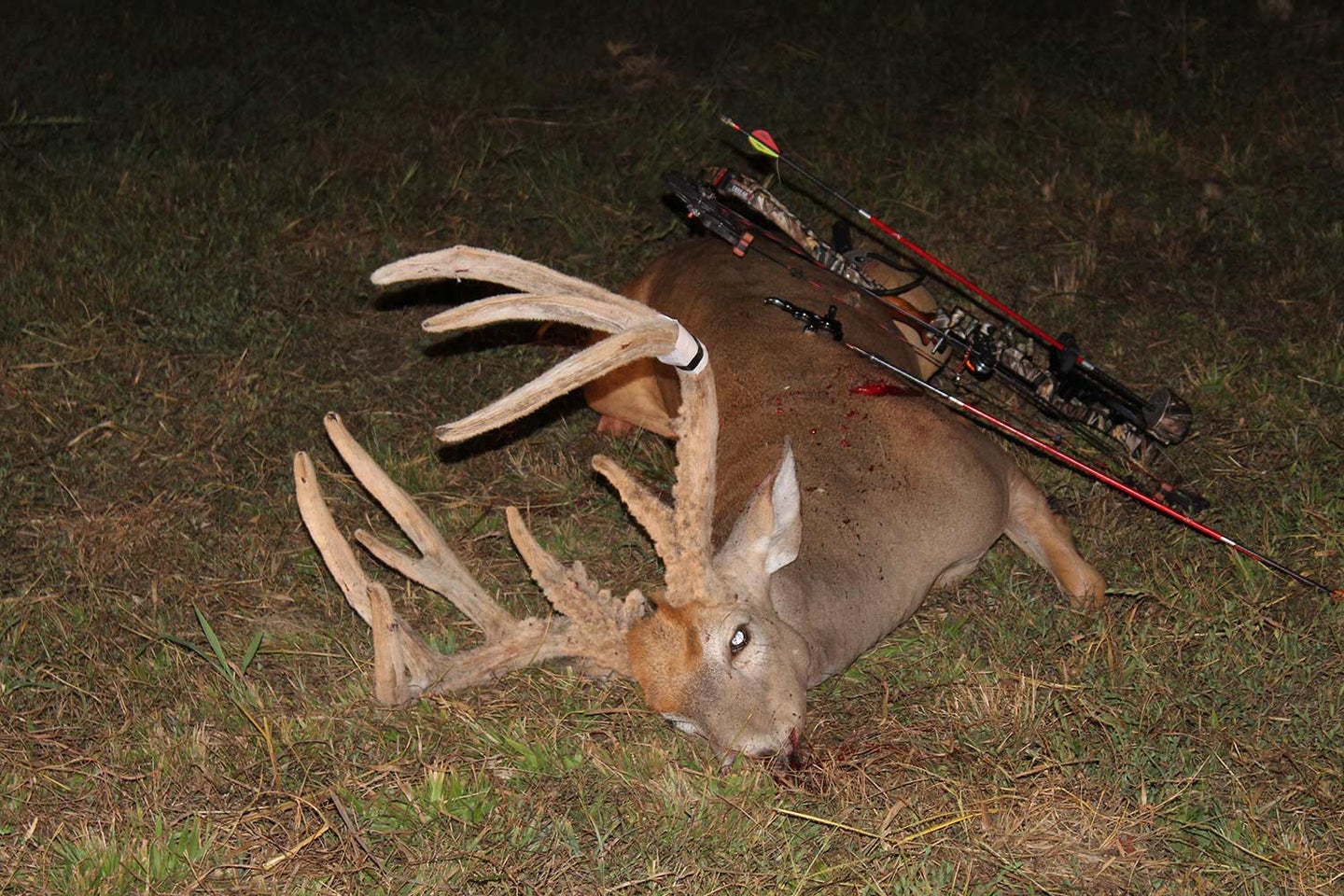 There was a behemoth 8-point buck bedded 40 yards from Jeffery Majors’ tree. The bowhunter was doing all he could to find an opening for an arrow while avoiding spooking the deer. But it wasn’t happening. There was no shot, and Majors had no choice but to wait a little longer for a deer that had already taken him years to see.

Majors hunts a 127-acre farm in Hopkins County, Kentucky, and has been hunting it since he was 12 years old. It’s rugged country, comprised of hardwoods, hills, and hollers. Parts of the area are reclaimed coal-mining ground, and the nearest ag fields are more than a mile away. There are some nice deer around, but Majors says the area doesn’t typically produce giants.

But in 2015, he got a picture of a 130-class buck that he estimated to be 3 years old. “Right out of the gate, he seemed camera-shy,” Majors says. “Every picture we got of him, even as a 3-year-old, was at night. Once he shed his velvet, he disappeared. We figured he was just passing through.”

But late the following summer, the buck reappeared. By that point, he’d bloomed into a 140-class buck, and his body began filling out. “For around here, he was a pretty good buck by then,” Majors says. “We had one daylight picture of him all season, and it was on an evening I had planned to hunt, but I didn’t make it out because I had truck trouble. When I checked the camera the next day, there he was, in shooting light, right under my stand.”

Kentucky’s archery season always opens the first Saturday in September, and many early-season hunters race against the clock to tag a buck that’s still in velvet. The novelty of that aside, a lot of bucks alter their late-summer patterns after they shed. This deer was one of them. Without fail, Majors says, he’d become a ghost once his antlers were stripped.

In late summer of 2018, Majors went through the usual ritual of hanging a few cameras over mineral licks. He let them soak for about a month and then checked them in late August after he and his daughter had gone squirrel hunting. “I remember that morning,” he says. “We didn’t kill any squirrels because it was too windy. But I checked cameras, and there that buck was. He’d blown up. Heavy, big-bodied. Easy 150s. I hunted him hard all season. Best I could figure, I put 450 hours in the stand and never saw him. Every time I’d get a picture of him, it’d just be one. He was camera shy.”

That brings us to the 2019 season. Again, Majors hung his cameras in mid-July and waited a few weeks to check them. “The first pictures I got were of him. I didn’t think it was the same deer, but then I started comparing old pictures,” he says. “The rack had similar characteristics, but the most distinctive thing was the buck had a notch in his left ear. I knew he was big, but I thought he was a 160-inch deer, tops.”

Majors knew he had a chance, but he felt it was slim. To that point, the deer seemed to only exist in photos. Worse yet, the 2019 season opened September 7—later than usual—providing even less of that precious time to hunt when the deer would still be in velvet.

Majors was in his stand opening weekend. “I saw deer every time I went out—young bucks and does,” he says. “But never him.” He carried in a bag of Big Tine that weekend and poured it out in front of his camera. He had to travel for work Monday morning, and so he didn’t hunt Sunday evening. The buck came in that evening at 7:45 p.m., and Majors was able to review the photo.

“He was still in velvet at that point, so I thought I maybe still had a chance,” he says. “But, I wouldn’t be able to hunt him again until Friday, and I knew if he shed, he’d become a ghost again.”

As a foreman on a line crew for Groves Construction, which services large electrical systems, Majors often finds himself on the road for various jobs. He’d been working in Louisville, which is several hours away. “I usually get home on Thursdays and leave again on Monday,” he says. “During deer season, my weekends are pretty well booked up.”

After getting home from the week’s work, Majors went straight to his stand on the evening of Friday—the 13th. “It was hot, 95 degrees, but I got in at about 2:30,” he says. The stand is near a creek, and Majors watched as a 4-point buck eased in for a bite of Big Tine, then got a drink from the creek, and bedded down. “He was doing that for hours, back and forth,” Majors says. “Around 5:30, I looked down the creek, and the big 8-pointer just stood up, 80 yards away. He’d been laying there the whole time. He walked down the creek to where the 4-point was.”

The buck crossed a ditch, and, for a moment, he was just 30-yards away. Majors drew his bow, but couldn’t get a shot. The big deer walked behind the brush, grabbed a drink from the creek, and bedded down at 40 yards.

“I was torn up, nervous, and shaking,” he says. “He was by far the biggest deer I’ve ever had within range. I watched him for an hour and a half. He was lying in the ditch, facing straight away from me. The 4-pointer kept bouncing back and forth, but big 8-pointer wouldn’t move.”

At 6:45, two does trotted in. Majors’ stand is a lock-on, 18-feet up—just low enough, he says, to get busted. Sure enough, one of the does looked right up at him. “She blew, and ran right at the buck,” he says. “The other doe took off in the other direction. I thought, ‘Well, I’m done.’ But he just laid there and never moved.”

Minutes ticked away. It looked as though shooting light might end without the buck ever presenting an opportunity. But at about 7 p.m., the deer stood and began walking right toward the stand. “He was just 20-yards away, but facing me,” Majors says. “I’d come to full draw, and he stopped and looked right at me. I’m pretty sure he saw me.” But Majors didn’t hesitate. With the deer quartering sharply to him, he put the pin on top of its shoulder, toward the neck crease, and released. He saw the arrow bury three-quarters of the way into the buck.

“He scrambled back to the ditch and bailed off, but I never saw him come out of it,” Majors says. “I was shooting a Rage Trypan, and I knew I had gotten good penetration.” He says he was almost certain the buck was lying dead in the ditch.

“By the time I calmed down enough to climb down, it had probably been 10 or 15 minutes,” he says. “When I got down, I found the tip of my arrow. He’d clipped a limb and broken it. I found blood right there, too, and it was gushing. I got up to the edge of the creek and looked and was like, ‘Wow, what a deer.’ He was lying right there. I knew he was big, but up close, his body size was incredible. He weighed 220 pounds field-dressed. I took a picture of him, sent it to my wife, cousin, son, and daughter. I knew I’d need help getting him out—and my phone just blew up.”

Majors had underestimated the size of the buck’s rack. “Four of us walked in to get him, and we’d all been thinking he was a 160-inch deer,” he says. “But then we stood there, looking at him, just in awe for 10 minutes, before we did anything. He was like a deer from Canada. His body was so big, it made his rack look small.”

When they got the deer back to the truck, Majors’ cousin found a tape measure, and they began rough-scoring the antlers. “We were off by a little bit, but we got 190-something inches that night, counting the spread,” he says. “For an 8-point, that doesn’t happen.”

Dale Weddle, who’s an official scorer, measured the buck a few days later. Boone and Crockett will not certify a velvet deer, so that was out, but Majors wasn’t about to strip away the velvet. The buck grossed 183 6/8 Pope & Young, and should net 169 6/8 as a typical; he has three kickers, plus a split G2.

The Buckmaster’s Whitetail Trophy Records system (BTR) takes into account all measurable antler—no deductions—but doesn’t include the inside spread. On that system, the buck scores 171 4/8 (and 191 with the spread included), which is good enough for BTR to declare it the new world record typical in the velvet category.

Regardless of how it’s measured, there haven’t been many 8-pointers taken like this one. Jeffery Majors was prepared and had put in his time. But every hunter needs a little luck too—whether it’s in the form of a buck holding its velvet a little longer than usual, or ignoring a stomping, snorting doe.

So much for Friday the 13th.