Dressed to Kill: The Making of a Mepps Aglia Lure 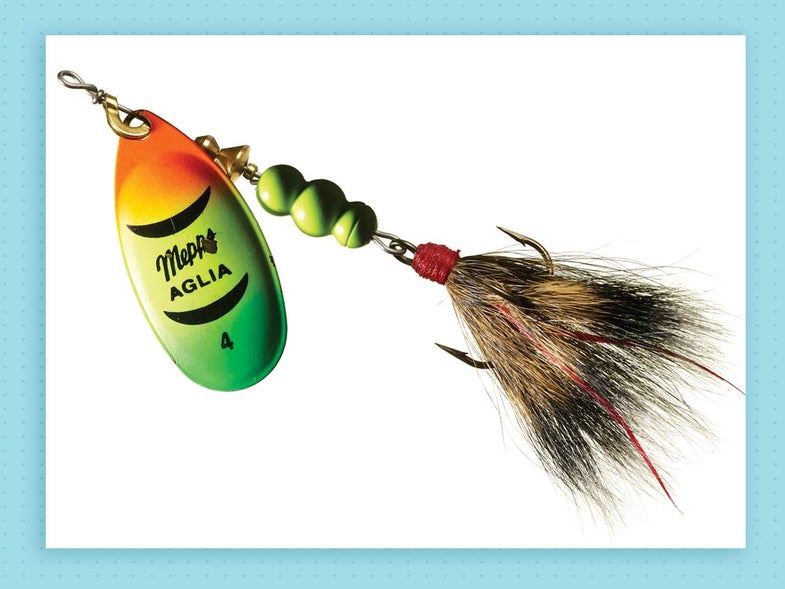 Tail Spinner: One of three Dressed Aglias made by Mepps for the author, using hair from a squirrel he bagged.. Levi Brown
SHARE

Thank God they flick their tails. I’d been hearing one bark for five minutes, but it’s only that ­visual cue that reveals the rodent, flattened and frozen against a hickory 30 yards away. I brace the .22 against a massive tree and am settling the crosshairs on the critter’s head when the trunk goes rubbery. But then, 150-year-old oaks aren’t that ­easily rattled, so it has to be me.

I’m well acquainted with buck fever, but I’d never dreamed it might extend to the smallest of small game. On the other hand, this was my first squirrel hunt, and there was more at stake than dinner. I’d conned my editors into sending me to Wisconsin to write about the Mepps Dressed Aglia, an iconic lure with a squirrel-tail dressing—the lure that I (like many others) caught my first fish on, the same lure that the readers of this magazine once voted the best all-around choice for trout.

The plan was to follow a squirrel tail from the tree branch to the Mepps factory and, eventually, into the mouth of a fish. I had three days in which to accomplish this, and getting the squirrel tail was step one—­without which there would be no further steps. If you have a naturally optimistic outlook like I do, you’ll understand my thought process at the moment of truth: No squirrel equals no story fee, equals eventual unemployment, equals homelessness, equals a future squeegeeing windshields at stoplights for spare change. I’m sure not all writers think this optimistically. I only know what works for me.

Finally, I get the squirrel more or less lined up, shoot three times, and miss three times.

Step One: Kill a Squirrel

I’m hunting with Merl Schonherr and his two sons on 3,000 acres of rolling hardwoods near Ridgeway, Wisconsin. Merl is the first ­squirrel-hunting ­architect I’ve ever run into, but then he’s not like any other architect I’ve met. He’s modest, friendly, thrifty, and talkative. He puts on the Annual Hyde Area Squirrel Hunting Tournament, headquartered at nearby Hyde Store, a pub so old, nobody seems to know who owned it first or when. Hyde’s has a pool table, $2 beers, pizza, stuffed deer and fish, and a loyal local clientele. The tournament entry fee is $20 per two-man team, and Merl doesn’t make a dime off it.

“It’s fun,” he explains. “I grew up hunting small game. Kids these days hardly know what it is. It’s how you learn.” He shrugs. I’ve met up with Merl and entered his contest to get my squirrel tail. He and I call our team the Squirrel Nut Rippers. His grown sons, Andrew and Austin, name themselves In One Ear, Out the Other.

Merl and I start out hunting together but split up after a while. I’ve brought outdoor-writer weather with me. The wind blows 15 mph, and occasional bouts of rain foretell the steadier downpour due this afternoon. I picture the squirrels holed up with a bowl of nuts, watching college football—just like the regulars at Hyde’s right now—chuckling at the thought of anyone dumb enough to be hunting today. Put me in a deer stand and I’ll see 10 squirrels for every deer. Today, I’ve seen six deer and a total of one ­squirrel—​the one I missed.

I stalk ahead at turtle speed, pausing for minutes at trees where I can steady the Remington Model 597 that Merl has lent me. Finally, at 10:20 a.m., coming down a steep hill, I hear barking close by. I freeze and finally spot the animal in the crotch of a tree. When I shoot, the squirrel drops with a soft thud into thick brush. Convinced that I’ll never find my prize if I take my eyes off the spot, I walk straight through the briers until I have the animal in hand. The Squirrel Nut Rippers will weigh in a single squirrel that goes 1 pound 6 ounces. But I have accomplished step one. Things are looking up.

All Mepps lures sold in the U.S. are now made at the factory in Antigo, Wisconsin. But they were invented in France by Andre Meulnart, an angler, engineer, and steel buyer for Peugeot. Meulnart patented the Mepps Shimmy in 1938, and “Mepps” derives from the name of the company he founded: Manu­facture d’Engins de Precision pour la Peche Sportive, or Manufacture of Precision Tackle for Sportfishing.

In 1949, a GI named Frank Velek, who had picked up a few Mepps lures in France, returned home and gave them to Todd Sheldon, a Wisconsin angler and tackle-shop owner in Antigo. Sheldon thanked him but wasn’t particularly impressed, and the lures spent two years working their way to the bottom of his tackle box. Then in 1951, on a slow day on the Wolf River, Sheldon tied on one of the alien-​­looking spinners—and in two hours had a limit of four trout that went 12 pounds. Sheldon started making plans to import, ­market, and sell the lure in the U.S.

In post-war France, nylons were more valuable than dollars, and Sheldon found a woman willing to send him lures in exchange for stockings. But even the most reckless woman goes through only so many pairs of hose, and when Sheldon’s demand exceeded hers, he traveled to France. He and Meulnart hit it off, and Sheldon started bringing the lures to the U.S. In 1956, he formed Sheldons’ Inc. to focus on his growing import trade. By 1960, U.S. sales of Mepps lures had topped 500,000. Sheldon thought they could do better—3 million.

“My dad set that mark,” Sheldon’s son Mike, now company president, says, “because that was more than any lure had ever sold on this continent. Our sales went sailing right past that goal the next year.”

Cut to the early 1960s. Sheldon had again limited out on the Wolf River, but as he left, he ran into a boy with his own limit. There were two important differences, though. The boy’s fish were bigger, and he had dressed the treble of his Aglia with hair from a squirrel’s tail. Sheldon experimented with bear, fox, coyote, deer, skunk, and badger. But the boy had nailed it. Nothing performed like squirrel tail.

The company started buying squirrel tails from hunters and boosted production. Today, Mepps sells somewhere between 4 million and 6 million lures annually. (Family businesses are tight-lipped about exact numbers.) Factor in hook sizes from 00 to 7, a hundred or so blade and dressing colors, and various blade designs, and you’re looking at over 8,000 different lures. But the backbone of the company remains the Dressed Aglia. Mepps buys 160,000 squirrel tails a year and, Mike says, would prefer to get twice that number.

The company is careful to pitch the deal as a squirrel-tail “recycling program” and winced when someone put up a “How to Make Bank on Squirrel Tails” post on Facebook that got 3.6 million hits. Not that you could actually get rich at it. A premium tail fetches 20 cents. If you’ve got 100 of them, it goes to 23 cents, and if you have 1,000 or more, 26 cents. The average is about 10 cents. But hunters still show up at the plant at the end of the season with tails. (The record for an individual is 1,435.) The tails are then graded, washed, dried, boxed, and frozen until they’re needed. Even the folks at Mepps aren’t exactly sure what draws so many hunters with boxes of salted squirrel tails. Maybe their fathers did it. Maybe it speaks to some inexplicable desire to be part of something bigger, to know your tail is out there catching fish for someone else. Then again, since you can either receive cash or double that value in Mepps merchandise, maybe it’s just a fun way to stock up on lures.

Peg Doucette, who has been tying for Mepps for 51 years, smiles when I pull my one tail from a plastic grocery bag. “That’s prime,” she says, fingers fluffing the hair. She snips a couple of inches off one side with little Fiskar scissors, bunches the hair neatly in her fingers, and inserts a long bit of red turkey quill into the clump, a strike attractor. She ties all this around the short shaft of a treble hook with 20 or 30 wraps of red nylon thread. Finally, she snips the thread and applies a few drops of two-part epoxy. Her movements have the unhurried efficiency that comes from hundreds of thousands of repetitions, and she is finished in seconds.

In no time, she ties two more hooks using hair from my squirrel. Doucette tied at home part-time for 17 years, doing 700 hooks a week. In 1966, she was asked to work in the factory, a block from her home. On occasion, she has commuted by snowmobile. Doucette could have retired years ago, as could many of the 30 or so employees at Mepps. But she likes the work and the people.

“Besides, what else would I do?” she says. She has been head of the Squirrel Department for years. Thinking how great that would look on a business card, I ask if she has one.

My lures move on to assembly. The parts come ready-made from France and are put together here. The backbone of every Mepps spinner is a Sandvic stainless-steel wire, which comes bent in a tight U shape with one shorter end and one longer. The hook is threaded onto the bend, then the doubled wire goes through the lure’s body, and the short end is clipped to hold it in place. Next come three small but crucial pieces: a tiny ball called the pearly, a larger cupped piece called the bell, and another, slightly larger piece, the bead. Each of these turns independently so that the clevis—the C-shaped yoke that secures the blade to the wire—can turn with minimal resistance. The clevis with the attached blade comes next. On most other spinners, the clevis is a piece of wire that’s bent, flattened, and then drilled. But a bent piece of wire is easily bent further, impeding the blade’s ability to spin. Mepps uses a folded brass clevis, which is more expensive but more durable. The last step is the winder, a machine that twists the long end of the wire to form the eye to which you tie your line. Done.

I now have a No. 4 Dressed Aglia with a firetiger blade, a No. 5 with a chartreuse blade, and a ­silver-​­bladed No. 3. They’re gorgeous, made just for me, and I’d much rather frame them than risk losing them to a snag or a fish. But that’s not the plan. And owner Mike Sheldon has agreed to try to get me a fish, so we pile into his truck and tow his boat to the Wisconsin River, half an hour away.

He backs the trailer into the root-beer-colored water, and we head upriver to just below a dam. I tie on the No. 4 firetiger and cast. The water is shallow and grassy.

“We’ve had a dry spell,” Mike says. “These aren’t ideal conditions, but we’ll give it a try.” After 15 minutes, something slashes at the lure, and I reel in a 19-inch northern pike. I shake Mike’s hand. Mission accomplished. A few minutes later, I get a 22-incher.

I have an early flight tomorrow from Madison, and I ask if I’m correct in thinking it’s about 90 minutes away. “Actually, it’s more like three and a half hours,” he says. He sees the look on my face and pulls the anchor. It’s already close to 5 p.m. By 6, I’m on the road south, having bagged one squirrel, three lures, and two fish. Succeeding at what I set out to do is a strange feeling for me. But as I bomb down Interstate 38, it feels like something I could get used to.