Why sportsmen should care about the battle over the Antiquities Act 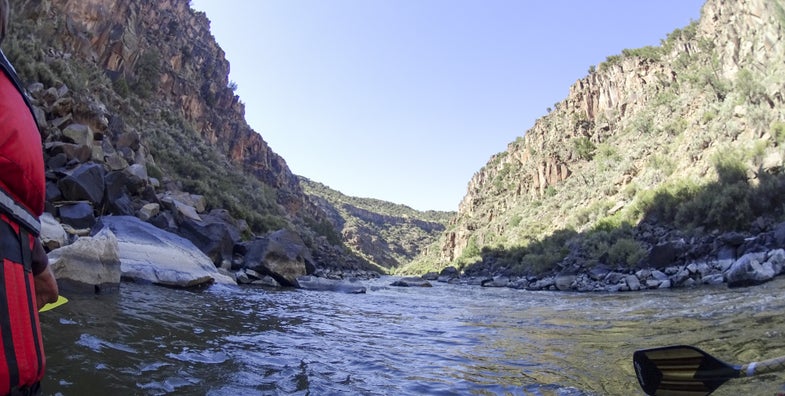 The view from the bottom of the gorge. JR Sullivan
SHARE

Outside Taos, N.M., there’s an 800-foot rift in the earth, 50 miles long. The gorge bores through a vast volcanic field, a plateau where elk, mule deer, pronghorn, and sheep winter. For 10,000 years or more, humans have gathered here, evident by petroglyphs of game carved into boulders along the Rio Grande, at the bottom of the canyon. In 2013, President Barack Obama designated this land as the Rio Grande del Norte National Monument, owing to its archaeological and scientific significance. Two weeks ago, I had a chance to fish and float through the monument, and it was staggering, both for its abundance of wildlife and for its raw, wild beauty. At 243,000 acres, it is one of the nation’s largest monuments, and it’s also one of the 27 currently under review by the Department of the Interior, acting on orders from President Donald Trump. The review is intended to determine whether the monuments meet the requirements and original objectives of the Antiquities Act, the law under which they were created. The review has sparked criticism from conservation and sportsmen’s groups, for its outcome could radically affect public-land usage in this country, and unlikely for the better. But why would the Trump Administration want to review, and likely reduce the size of, national monuments in the first place? Why have these lands come under attack?

In short, the decision to review the 27 national monuments—which total 11 million acres—stems from the fraught nature of some of their designations; Interior Secretary Ryan Zinke has already said that he will recommend reducing the size of the Bears Ears National Monument, likely the most controversial monument designation, following the public-comment period. It remains to be seen how many other monuments the DOI may shrink. But to understand the importance of national monuments, and why they have come under fire, first requires an understanding of what these lands are.

National monuments are federal lands of import that U.S. presidents have set aside for additional protections; they are not national parks. Through the powers afforded by the Antiquities Act, presidents can create national monuments in order to conserve “historic landmarks, historic and prehistoric structures, and other objects of historic or scientific interest” on lands already managed by the federal government. Since President Theodore Roosevelt signed the Antiquities Act into law, in 1906, 16 presidents—Republicans and Democrats alike—have used it to protect some 840 million acres of public land, much of which remains open for hunting and fishing. The monuments range drastically in size and scope; the Statue of Liberty and the 583,000-acre Papahānaumokuākea Marine area, for instance, are both national monuments. If Congress takes issue with a president’s monument designation, it has the authority to step in, but it has rarely chosen to do so. A president can alter or reduce the acreage of national monuments designated by his predecessors, but this, too, has seldom occurred. No president has rescinded a monument outright, as some conservationists suspect that President Trump might attempt—though it’s widely believed that the Antiquities Act does not grant him the power to make such a decision.

What Monuments Mean for Sportsmen

A big issue with national monuments, and a reason the DOI is reviewing them, is the additional restrictions they carry, especially concerning gas and oil development. As far as hunting and fishing opportunities go, most national monuments fall somewhere between national forests and national parks. National forests and similar federal lands are managed for multiple use, meaning recreation—including hunting and fishing—is permitted, with few restrictions. But forest land is also leased for energy development, mining, and grazing. National parks, on the other hand, are far more restrictive than national forests, and, nearly without exception, forbid hunting within their boundaries and also significantly limit energy development and grazing.

And then there are national monuments. By and large, hunting and fishing are permitted in Antiquities Act national monuments where it is practical to do so. But once federal land is designated as a national monument, further energy leasing, mining, and grazing are limited. Conservationists and sportsmen tend to favor national monuments for this very reason, since they ensure the quality of the land and wildlife, which energy development and mining can jeopardize, and generally remain open for hunting. Oil and gas companies, however, lose out when these additional restrictions take effect, so they often leverage hard against new monument designations.

The Issue With Monuments

Now to the tricky stuff: The circumstances are fraught surrounding some of the designations of the 27 monuments under review. During his time in office, President Barack Obama designated more national monuments than any other president—a lot more. He set aside 553 million acres, compared with George W. Bush’s 218 million, Bill Clinton’s 5.7 million, and Jimmy Carter’s 56 million. This ruffled some feathers—especially in Utah, the epicenter of the lands-transfer movement. Pundits have speculated that the creation of Bears Ears, at 1.35 million acres, was, at least in part, political retribution directed at Republican Representative Rob Bishop, the architect of the transfer movement.

Over dinner the night before our float through the Rio Grande del Norte, Brad Powell, a regional director for Trout Unlimited, who previously spent 30 years at the U.S. Forest Service, overseeing monuments and other wilderness, addressed this point. “Clearly the president made a decision that wasn’t supported by all,” he told our small group of sportsmen, conservationists, and writers. But, he added, “It’s my belief that any national monument wasn’t going to be acceptable to the Utah delegation.”

Conservative lawmakers also accused President Obama of executive overreach, given the size of the monuments he created. They based their accusations on a line in the Antiquities Act that stipulates that monuments must be “confined to the smallest area compatible with proper care and management of the objects to be protected.” That sentence has caused a fair amount of debate over the past century, but the Supreme Court has ruled, on more than one occasion, that—barring Congressional intervention—the president can make national monuments as large as he pleases.

But now that Republicans control the White House and Congress, the DOI is reviewing, and will likely scale back, at least some of the monuments President Obama created. Also, neither President Trump nor Interior Secretary Ryan Zinke has hidden their interest in expanding oil and gas operations on public lands, which certainly contributed to the decision to review the monuments.

GOP legislatures aren’t alone in questioning the use of the Antiquities Act. There’s a constituency of sportsmen, however small, who are apprehensive about the public land they use becoming a national monument, for fear it’s a path toward reduced hunting and fishing access. These sportsmen are quick to point out that a number of national monuments have become national parks, the establishment of which bring tourists, cabins, and maintained hiking trails—the death of true wilderness, the thinking goes—not to mention the end to hunting on those lands. These concerns have some validity: Over the past century, 45 or so of the 150-plus current and former national monuments have been redesignated as national parks. But turning a national monument into a park requires an act of Congress; designation of a monument under the Antiquities Act itself doesn’t mean that the land will one day become a park. So, broadly speaking, if there’s anyone to blame for the loss of hunting access in national monuments, it’s likely our elected officials, not the Bureau of Land Management, the Forest Service, or the president.

Later in our conversation that evening, Powell pointed out that, though the presidential proclamations designating monuments generally limit future oil and gas development, “the rest of the management plan comes through a public process.” So citizens have the opportunity to weigh in on how national monuments are run prior to their creation. In the Rio Grande del Norte Monument, for instance, hunting and fishing are both allowed, thanks in part to a politically engaged sporting community in nearby Taos, N.M.

There’s no easy answer to the debates surrounding national monuments. It’s a hugely complicated and politicized issue, and it’s a shame that our public lands are entangled in the controversy. Though the majority of national monuments have remained open for hunting and fishing, it’s true that a number have been turned into national parks and closed off—and that’s a very real concern. But, with the ongoing assault on our federal public lands, and the expanded drilling and mining that’s likely to come, this is a time when sportsmen need to defend the property we all share. Hunting and fishing can be a part of any monument management plan if sportsmen engage in the public-outreach process, so take it upon yourself to make sure that happens, and to speak up for every other American hunter and angler. So long as that occurs, sportsmen should champion the protection of our most prized lands. As far as federal overreach is concerned, maybe one could argue some of the 27 monuments are larger than need be; it’s a matter of opinion and political perspective, mostly. But if President Trump does reduce the size of the monuments currently under review, he could promote a precedent in which our public lands become collateral in political games between bureaucrats who may never have stepped foot in them. And even if some of the monuments are too big, say, I struggle to imagine that in 50 years we’ll regret having further protected these lands. I can imagine, however, having regrets if things go the other way, if these lands are not conserved for all American sportsmen, present and future.

JR Sullivan is the associate editor for Field & Stream.