Marsh Madness: The Anglers’ Proposal to Restore the Everglades

Fishermen have proposed a way to restore the Everglades and South Florida rivers, but will their idea ever become a reality? 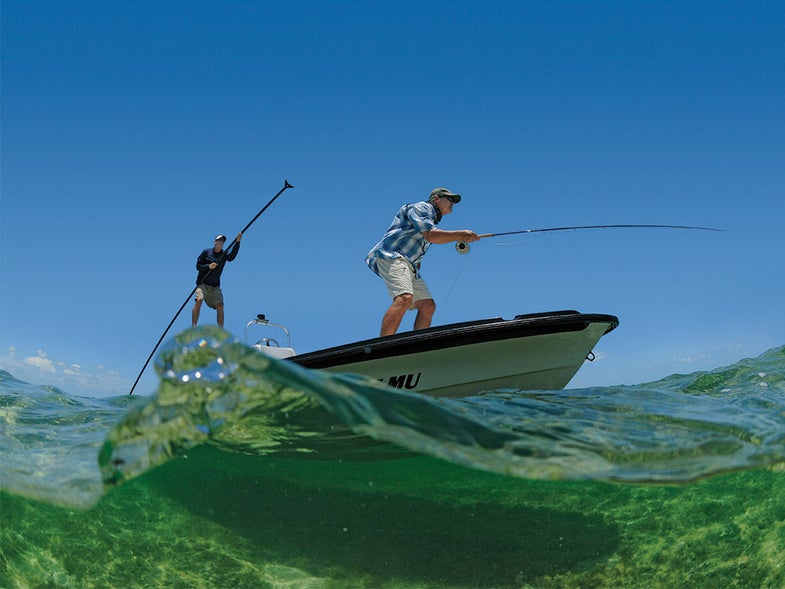 Hit the Poles: A flats guide gets his angler into position on Florida Bay.. Jeff Edvalds / Images on the Wildside
SHARE

Black, toxic water was flowing into the Caloo­sa­hatchee and St. Lucie Rivers. Following the rains of Hurricane Irma in Sept. 2017, the U.S. Army Corps of Engineers began discharging highly polluted water—billions of gallons of it—from Lake Okee­cho­bee into the South Florida rivers to prevent the flooding of agricultural land to the south, but at the same time poisoning some of the richest gamefish habitat in the world.

This was hardly a first.

In the summer of 2016, the Corps had discharged more than 200 billion gallons of water from Lake Okeechobee, setting off a chain of catastrophes. A 239-​square-​mile bloom of toxic algae had been spreading across the lake all summer, and when that water was released, the Caloo­sa­hatchee and St. Lucie were flooded with it. Beaches were closed. People fell ill. Fish died. Officials advised people to stay away from the very waters that had made this part of Florida one of the nation’s most famous fishing destinations. It was the worst the pollution had ever been, but the discharges happen every rainy year in South Florida. So when the black water poured into the rivers again this past September, people knew what to expect.

“It’s economic free fall,” a St. Lucie fishing guide told me on a recent trip to Florida. Water dumped from Lake Okeechobee had devastated the local fishing and tourism industries and killed the St. Lucie’s seagrass beds—nurseries for grouper, snapper, seatrout, redfish, and more. The damming of Lake Okeechobee necessitates these discharges and cuts off the Everglades and Florida Bay, one of the world’s greatest saltwater fisheries, from a fresh flow of water.

Fishermen, conservationists, and guides are now working double time to save the St. Lucie and other South Florida rivers. Their goal is to find a way to send water south out of Lake Okee­chobee, rather than discharge it through its canals and estuaries.

This would not only help restore the rivers but would also revive the Everglades and Florida Bay. But the mammoth Florida sugar industry, which in many ways holds the key to solving the pollution problems, has shown little interest in helping. Meanwhile, the losses in Florida are reaching a breaking point.

This disaster is intertwined with the history of Florida. For millennia, the Kissimmee River twisted through central Florida before flowing into the 730-square-mile Lake Okeechobee to the south. In rainy seasons, Lake O, as locals now call it, overflowed its southern brim, and the waters continued down into the Everglades. This sheet of water, 60 miles wide in places and as shallow as 6 inches, moved across 11,000 square miles of trackless wilderness until it reached Florida Bay, just 100 miles south. This is the river that made the Everglades. This is the river that fed the Biscayne Aquifer, which supplies 8 million people with drinking water. But this river is now pretty much gone.

After a devastating hurricane in 1928, the U.S. Army Corps of Engineers built the Herbert Hoover Dike to control Lake O, and set about draining and opening lands to the south for farming. In 1948, 470,000 acres of these newly drained lands were established as the Everglades Agricultural Area (EAA). That same year, the Corps began channelizing the Kissimmee River to the north of Lake O, opening tens of thousands of acres for farming, ranching, and development. Over the decades, runoff from these new communities and farms found its way into the stagnating Lake O, creating the algae blooms we see today. All the while, south of the lake, the EAA kept growing and now totals some 700,000 acres, nearly 500,000 of which are devoted to sugar production, and whose existence depends on the Herbert Hoover Dike.

Sugar is a fickle crop. Too little water dries it. Too much drowns it. So, during rainy years, Lake O must be drained to prevent flooding in the EAA, and to protect the towns within it. Rather than run that risk, in the 1930s, the Corps began sending large discharges of polluted Lake O water west down the Caloosahatchee River to the Gulf, and east down the St. Lucie Canal to the Indian River Lagoon, on the Atlantic coast. There’s no water-pollution event in all the U.S. that comes close to the magnitude of this one, and it is perfectly legal.

“The discharges have been killing us off every rainy year, for over 30 years now,” Rufus Wakeman, a veteran St. Lucie fishing guide, told me, as we sat outside the River Palm Fish Camp. “This was one of the most vibrant fisheries I’ve ever been a part of, and the degradation we’ve seen is just incomprehensible.” The 2016 discharges he witnessed in the St. Lucie eclipsed those of previous years, and the ones this September wreaked further havoc. But as bad as the pollution has been, the key concern, Wakeman said, is Florida Bay and the Keys.

Ever since the construction of the Herbert Hoover Dike, the Everglades National Park has been drying out from a lack of water from Lake Okee­cho­bee; by some estimates, nearly half of South Florida wetlands are already gone. Similarly, the Biscayne Aquifer, deprived of any recharge, is dropping fast, with saltwater intrusion increasing. Florida Bay has lost more than 50,000 acres of seagrass, and with it the bonefish, seatrout, tarpon, and reef and offshore fish that were born and had sheltered there. “Nobody can believe that we’ve let the problem go this far, when we know exactly how to fix it,” Wakeman said.

Read Next: A Catastrophe in the Everglades, and How to Fix It

The Fix Is In … Limbo

People have known the solution to South Florida’s water problems for nearly as long as they’ve been suffering from them. The scientific consensus is that there’s only one feasible solution: Construct a flow way from Lake O through the EAA to the south. The flow way will curb future discharges but will need to be planted with enough wetlands vegetation to clean the waters of pollutants. As the cleaned water flows south, it’ll restore the Everglades, recharge the Biscayne Aquifer, and bring a balance of fresh and saltwater to Florida Bay. This solution has been around since the 1990s, but no solid plan has been put into action. Over the past decade, the sugar industry has taken a hard stand and refused to sell land to create the flow way. How has the sugar industry managed to block every major restoration effort? According to the Miami Herald, from 1994 to 2016, the two major sugar companies in the EAA contributed nearly $58 million to state and local political campaigns, which may help explain it.

After the summer of 2016, Florida Senate President Joe Negron decided something had to be done. He supported a proposal to create water-storage reservoirs on existing state lands and on some leased lands south of Lake O, to avoid future discharges. But no exact acreage for the new ­water-​storage reservoirs has been established. “We are still trying to determine what we will get,” Dawn Shir­reffs, of the Everglades Foundation, told me. Will the reservoirs stop the discharges? “It can help,” she said. “It won’t eliminate the discharges, but it can help.”

It’s a baby step in the right direction. The Army Corps of Engineers is putting bends back in the Kissimmee River, trying to reconnect the river to its floodplain, to let some of the pollution settle before it gets to Lake O, another positive step. But the question remains whether Florida will have the political will to fix the systemic problems plaguing its waters. Grassroots groups like Bullsugar are trying to drum up support from anglers to pressure legislators to act. For Wakeman, the goal is simple. He remembers watching tarpon roll through the St. Lucie and snook bust the surface—sights no one now could imagine. “I’m like everybody else from here, working on this year after year,” he said. “I just want to see clean water in my lifetime.”