Up Close and Personal With the TSA

How much have Americans given up in the name of security? 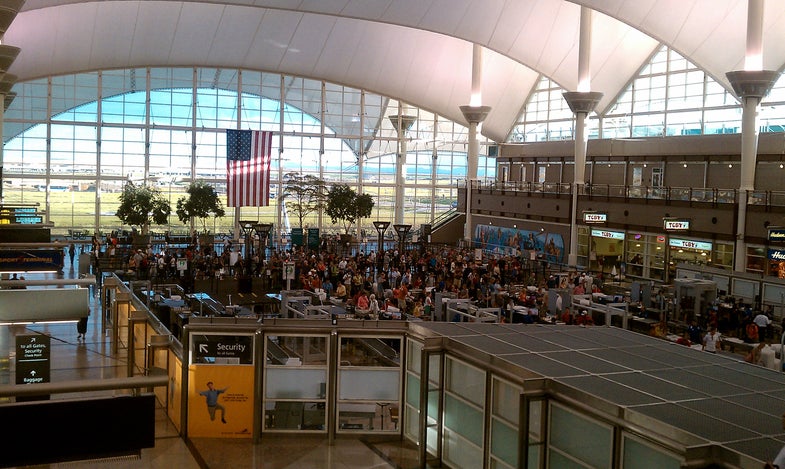 The bespectacled, bald TSA guy who motioned me toward him with a gloved hand was about my age but skinnier. I found myself wondering how he liked working for the decidedly bloated and decidedly inefficient agency. The TSA is a $7.3-billion-per-year joke. Any number of audits run by the TSA itself have shown that it fails to detect as many threats as it uncovers. Just this year, according a group of auditors attempting to smuggle banned items past screeners at the Minneapolis-St.Paul airport succeeded 95 percent of the time, according to Fox affiliate KVRR.

The screener held up a hand to stop me while he waited for the scanner image to come up. I looked over my shoulder to see that my body had lit up in four places. I was wearing an unbuttoned, untucked blue shirt and a red undershirt. “Sir, do you have any groin abnormalities?” he asked. I was tempted to make a joke but decided against it. The TSA doesn’t do jokes.

He said the machine had probably reacted so strongly because I had two shirts on. As if this had not been obvious before I entered it or was significant because so many terrorists favor explosive undershirts. He then explained that he was going to have to do a “sensitive area” pat-down, which would involve running his gloved hands up each leg until he “met resistance and then—”

“I’m required to tell you all this,” he said. And then he started again from the beginning.

He ran his hands over my shoulders, under my arms, and down my torso. He knelt, checked around each ankle thoroughly and started up my legs. He went up each inseam until he met “resistance.” I didn’t feel particularly humiliated. But I could understand how someone might.

I thought back to a Korean War vet I’d watched get patted down in the airport at Rapid City, S.D. I’ve written about him before but I’ve never been able to forget his clear, watery eyes and tremulous voice. Here was a guy who’d served his country and was proud of it. He had on a ball cap from the ship he’d served on, a light jacket, and pressed pants. But the country he’d served had either ceased to exist or had become unrecognizable to him.

“The terrorists won this one, didn’t they?” he’d said to the young TSA officer frisking him. He wasn’t angry. He was smiling. But he couldn’t hide the sadness and regret in his voice. The young man frisking him hadn’t understood. “I said, they won this one, didn’t they?” the man repeated. The youngster still didn’t follow. You could almost see his mind working, the machinery behind the decision to dismiss whatever this old dude was going on about.

He was talking about how willingly we’ve traded our liberty for security—or at least the illusion of it supplied by the TSA. I’ll never forget that guy. It increasingly seems to me that we—all of us, our whole country and its leaders—have failed him. We’re so fearful that no intrusion is too invasive. As long as it keeps us safe.