Unless you’ve been off the grid or asleep for the past couple of weeks (I’ve been duck and sharptail hunting,... 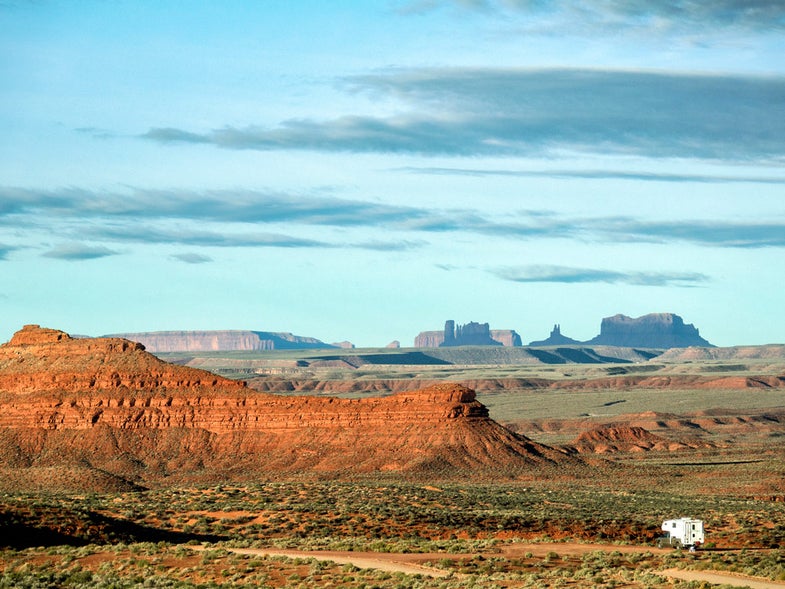 Unless you’ve been off the grid or asleep for the past couple of weeks (I’ve been duck and sharptail hunting, ever since a monster warm front melted all our snow and burned the ice off all my favorite potholes), you have heard the news: On Dec. 4, President Trump journeyed to Salt Lake City, Utah, to announce that he was using his executive powers to drastically scale-back two National Monuments, Bears Ears and Grand Staircase-Escalante, both of which had been declared into existence by former Presidents Obama and Clinton. Bears Ears National Monument was reduced in size by 85 percent, to a total of about 200,000 acres, from the original 1.15 million acres. The 1,880,461-acre Grand Staircase-Escalante National Monument, which has been in existence since Clinton created it in 1996, was cut in half.

The news has been greeted with fury by many conservationists, by the recreation industry, and by many others in Utah and across the nation who simply cannot understand the need for this action. During the public-comment period on the proposal to reduce the monuments, 2 million Americans submitted their comments to the Department of Interior with 99.2 percent of the comments urging Interior Secretary Ryan Zinke to leave the monuments intact.

There are many puzzling elements to the recommendations for reductions by Secretary Zinke and by the Trump administration’s extremely strong and sweeping order. One of the most puzzling is how the monuments are now laid out: Bears Ears is divided into two relatively small units that barely include the Bears Ears Buttes, and that monument no longer includes the archeologically-rich region of Cedar Mesa. Information that came out after the suggested cuts seems to support the idea that the Bears Ears reductions were at least partially at the behest of a uranium company based in Colorado.

The new version of Grand Staircase-Escalante is divided into three distinct parts—one of which, the Kaiparowits Plateau, seems to have been designed to remove from monument protection the coal deposits that locals (specifically, the San Juan County commissioners, who are perhaps the main force behind President Trump’s order) decided long ago were the keys to economic prosperity and the quality of life here.

And when an objective person seeks further to understand the motives for the changes, one must also notice that most of the Hole in the Rock Trail—the path of the epic Hole in the Rock Expedition, where intrepid Mormon settlers battled and carved their way for almost six months through near impossible terrain to settle around what is now Bluff, Utah—has also been taken out of the monuments. The Salt Lake City Tribune has the best story (and the best coverage, not surprisingly) on the executive order and the changes that are proposed.

There is so much mis- and dis-information being spread about what the monuments are, and what the executive order to reduce them will actually do, that it would take pages and pages to try and explain it all. I wrote this post last January, hoping to at least clarify some of the irrefutable parts of it all, and also helped to write and make this one. (And there is room for differences of opinion: I freely admit that, as a lifelong hunter, fishermen, and fan of wild places, and a person who came of age in booming north Alabama, I like to see lands conserved for the future.) Some Americans still seem to think that monuments represent a “land grab” by the federal government. They don’t. The land was, and remains, federal; the monuments just added another layer of protection to them. Hunting and fishing on these lands were never restricted. Some ATV access was threatened, but access itself was not. The state of Utah has not “taken back” any of these lands. The lands have been federal lands since the establishment of Utah as a state, and the state gave up all claim to the lands at the time of statehood. And so on. It is hard to have a debate about the righteousness or wrongness of things when we don’t know what the things we are talking about really are. This statement by Steven Rinella is extremely clear, and valuable.

There are some very good questions raised by President Trump’s actions on Dec. 4. Let’s look at a few of them:

Who Will Pay the Legal Fees?

The reductions in the monuments were extremely controversial outside one small part of Utah. As noted above, an estimated 99.2 percent of the comments received from the public by the Department of the Interior were in opposition to reducing the size of the national monuments. So far, as of Dec. 7, five lawsuits were being planned against the administration’s decision. The American people—the same taxpaying public that sent 2 million comments requesting that the monuments not be reduced—are now going to be paying lawyers from their own Department of Justice to argue for the reduction of those same monuments.

What Precedent Does This Set?

There are many sleeping-dog legal questions that will be decided in the wake of these court cases. Although many legal experts still question whether the president has the power to change the boundaries of the monuments, it has been done before. President Woodrow Wilson cut the national monument (established by Theodore Roosevelt) that would become Olympic National Park, in half, in response to a local movement that claimed the land was being “locked up” to save elk herds, which were not valued by local farmers or timbermen. Here is an excellent history of that conflict—a conflict that sounds like it could be happening again right now. (Wilson, for the record, also created the 1 million-acre monument that became Katmai National Park in Alaska.)

Republican Congressmen like Utah Sen. Orrin Hatch have been trying to abolish the Antiquities Act for a very long time, and Trump’s decision may be the opportunity they’ve been waiting for. Some portion of American citizens may celebrate the end of the Antiquities Act, but at least some percentage will not be sure of what they are asking for. The Antiquities Act was written by Iowa Sen. John F. Lacey, a battle-scarred veteran of the Civil War, in response to the orgy of looting of Native American artifacts throughout the Southwest (it was signed into law by Teddy Roosevelt in 1906), and it has been used over and over by U.S. presidents to conserve or protect our heritage, from battlefields and graveyards to some of America’s best hunting and fishing country. If the majority of Americans thinks we no longer need it, then the Antiquities Act will be abolished just as Senator Hatch wants. That will be a fairly definitive statement about what the American people value in these modern times. Either way, the outcome of the legal challenges to the current reduction of the monuments could open up all of our monuments to review.

Four days after president Trump’s decision, on Dec. 8, Secretary Zinke announced new reductions and management changes for more monuments. And Utah Rep. Rob Bishop has introduced legislation to drastically reduce the Antiquities Act’s powers, and to enable, for certain, future Presidents to undo its work in protecting public lands. Already, the moves to reduce the monuments have injected so much uncertainty into this method of conserving American public lands that the Antiquities Act, already despised by politicians like Hatch or Bishop, has been broken. Some will see this as a good development—ending a century of federal overreach in protecting public lands. Others, concerned with protecting these lands for the future as the U.S. population soars, and resource demands skyrocket, will be sad to see the Act reduced to the ash heap of our history. When Zinke recently proposed a new national monument in the Badger-Two Medicine region of Montana’s Lewis and Clark National Forest, local Blackfeet tribal officials, who hold the area sacred, were skeptical, asking why, when a future president could simply rescind the monument, the Blackfeet would want to expend time, energy, and compromise to support it.

Will the Monuments Become National Parks?

In one interesting reaction to the furor over the monument reductions, Utah Rep. Chris Stewart has proposed creating a new 100,000-acre Escalante Canyons National Park, telling a reporter from the Washington Post, “Dude, there’s nothing quite like Utah,” Stewart said. “We want to share that with as many people as we can.” Hunting is generally banned in National Parks, unlike in the original Grand Staircase-Escalante National Monument, where the right to hunt was guaranteed in the management plan.

Has a Can of Worms Been Opened?

Perhaps emboldened by the general glee that many of the most anti-conservation politicians in our country have expressed over the monument reductions, Montana Sen. Steve Daines has introduced legislation to withdraw 449,500 acres of Montana’s public lands from Wilderness Study Areas. These isolated public lands provide some of the best elk and mule deer hunting in the world (including the remote mule deer country of the Blue Joint, in the southern Bitterroot Range). Daines is calling his bill the “Protect Public Use of Public Lands Act,” which is strange, since the I have hunted much of that country, and used it very well.

What’s in it for Us?

American taxpayers paid $14 million to buy out the coal leases on the Kaiparowits Plateau, back when those leases were included in the national monument. We also gave the state of Utah $50 million of our cash for their state lands that fell within the monument, as well as trading the state valuable federal public lands (our lands) in other parts of the state. Who do we contact to get that money, and those lands, back?