On the True Nature of Handloading and Greek Mythology

Despite the much-improved quality of factory ammo, handloading is far from futile 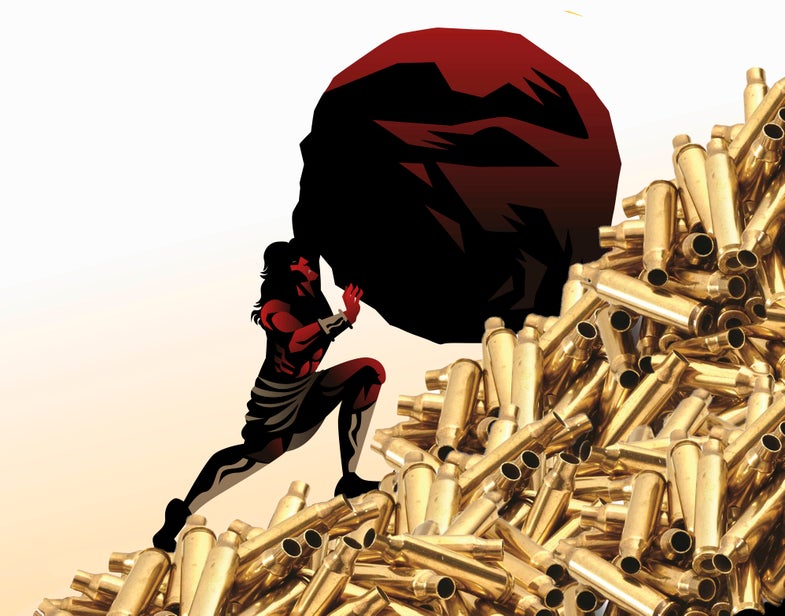 In response to my post of July 27th on the evils of bad brass, Fieldkorn observes that factory ammo is so good now that there’s not much point in handloading anymore, and that handloaders are like the mythological Greek Sisyphus, who was condemned to roll a rock up a hill through eternity only to have the thing come rolling down on him. Fieldkorn also states that I’m the Sisyphus of handloaders, which I don’t follow, but we’ll get back to that in a minute.

He’s quite correct that factory ammo is infinitely superior to what it was 10 years ago. (I’d say more like 15 years ago, but let it ride.) Indeed, I have four rifles in which I shoot only factory ammo. I can’t do any better, and I buy it in bunches so it doesn’t cost quite so much.

However, here a few non-alternative facts:

[2] Cartridge cases are worth money. If you throw them away instead of re-using them, you’re wasting money. If you reload, you’re not paying for the case, or the ammo maker’s advertising, or executive bonuses, or free hunts for gun writers, or a booth at the SHOT Show.

[3] Handloaders get to do stuff that non-handloaders can’t. For example, the Business Bullet in my .308 Ruger Scout Rifle (GSR) is the 150-grain Barnes TSX, which costs $37 for a box of 50. It pains me to shoot them at paper, so what I did was what I do for a number of rifles that eat expensive bullets: I find cheaper bullets that shoot to the same point of impact and use them for sighting in, practice, or shooting for fun.

If you don’t handload and want to try this, you have to buy multiple boxes of factory ammo until you find something that works, and you can spend a bundle of money with nothing to show for it at the end. But since I do handload, I bought a box of 150-grain Sierra boattails, and a box of 150-grain Hornady boattails, and made up handloads using the same powder charge and primer as I do for the X-bullets.

As it turned out, I had to cut back the powder charge two grains, but both bullets print exactly where the X-bullets do, and the whole project took two trips to the range.

Now, back to Sisyphus. Sisyphus is a symbol of futility, but as even the dullest of you can see, handloading is anything but futile. I started loading my own in 1965; since that time, and God knows how many rifles, I think there have been three guns that I could not get to shoot.

If I’m a figure of Greek mythology, it’s Odysseus. The wily Odysseus. The crafty Odysseus, as Miss Rice used to say with a strange twinkle in her eye back in Latin class.

Odysseus, also known by Ulysses, was the king of Ithaca, who fought on the side of Greece during the Trojan War, survived 10 years of that, and then made his way through another 10 years of a journey home that was filled with dangers, toils, and snares, conjured up by the sea god Poseidon. (The ancient Greek gods were an extremely ill-tempered and vengeful lot, and you should be glad you didn’t have to deal with them.)

He arrived home to find his queen, Penelope, besieged by suitors and claimants to his throne. They declared that Odysseus was dead, and that his job and his wife were up for grabs. Ulysses put an end to that nonsense by stringing a bow that only he could draw and killing every last one of them.

That’s my kind of ancient Greek.

And since we’ve descended into this tedious sink of learning, a note about weapons of the time. The siege of Troy took place somewhere between 1260 and 1180 BC. It was a war that lasted 10 years, and the last few weeks, which ended with the defeat of Troy and the sacking of the city by the Greeks, is described by Homer in the Iliad. If you like gore, you’ll love the Iliad. Who did what to whom and with what is described in loving detail.

The Greeks and Trojans fought with bronze swords, daggers, and spears, since the Iron Age had yet to arrive. The first bronze weapons appeared around 1700 B.C., so by the time of Troy, they were highly developed. Since bronze is non-ferrous and doesn’t rust, a considerable number of these weapons have survived in excellent condition.

I’ve heard from one curator that these ancient bronze smiths could do things with the metal that we don’t know how to duplicate today, and that the blades they made were very strong, flexible, and sharp. Warriors of the time were aware even then that the point beats the edge, so they knew that to stab is to survive. All that wild whacking and hacking that you see in movies like Troy is nonsense.

People like Achilles, and Ajax, and Hector, and Odysseus, were highly trained professional killers, and if you had to face one of them, you would be best advised to use a gun, or run away, or both.